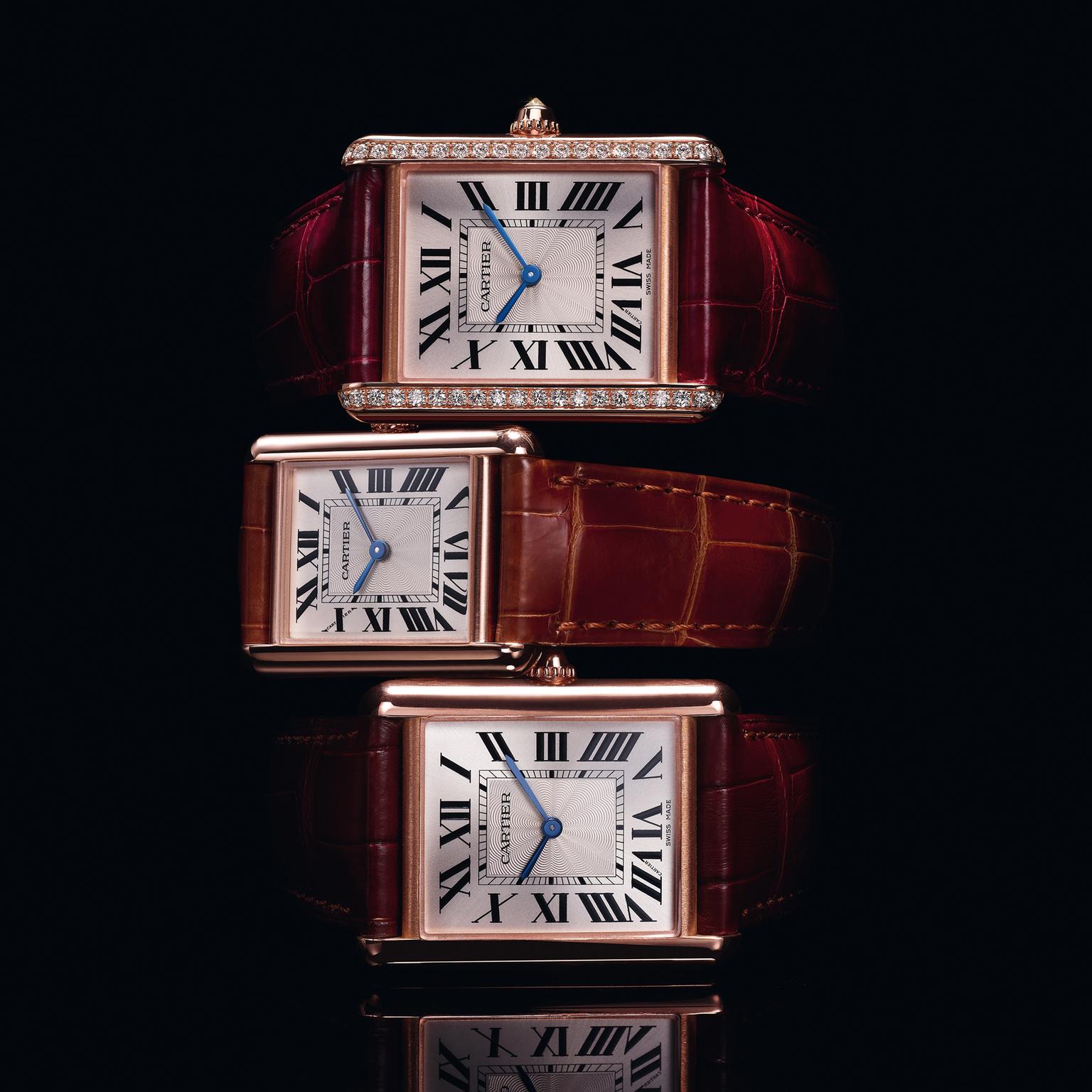 Cartier celebrates 100 uninterrupted years of the invincible Tank watch with new blood injected into the much-loved Française and Américaine lines as well as a new Tank Cintrée Skeleton model with a vertical baguette movement. Endowed with a design that has remained practically intact for a century, we take a look at how the tenacious Cartier Tank watch was conceived and how Louis Cartier’s modern Tank steamrolled the pocket watch into virtual extinction, proclaiming the dawning of the age of the wristwatch.

Louis Cartier was fascinated by the speed at which technology was changing at the turn of the 20th century. It was the age of the automobile, the aeroplane, mass-produced factory goods and the Eiffel tower – an epoch of immense progress. And he wanted to be part of it. Following a request from his friend, the Brazilian millionaire and daredevil pilot Santos Dumont, for a watch to fasten to his wrist while piloting his planes, Louis Cartier detected a unique market opportunity to position the wristwatch as a male accessory.

Tapping into the nascent industrial design spirit that would become one of the founding blocks of Art Deco, he created a square watch with exposed screws on the bezel, like mini rivets, for his friend Dumont. A radical departure from the round-shaped pocket watches that had dominated the watchmaking scene up until then, the 1904 Santos watch dispelled the prevailing perception that wristwatches – or wristlets – were effeminate.

It wasn’t until after the Battle of the Somme in 1916 that the public caught its first glimpse of an armoured tank, a top-secret military weapon that everybody was talking about but which very few had seen. Deployed in trench warfare to cross the killing zone and punch through the enemy’s defences, the armoured tank marked a new era of mechanised warfare. Louis Cartier was so impressed by the tight, rigorous geometry of the modern Renault combat tanks that he adopted it as his muse for a new line of men’s wristwatches.

Like the formidable armoured tanks rolling across the Western Front, the Tank watch ventured into terrain no watch had ever been before, stylistically speaking. The no-frills Tank watch was a radical departure from the ornamental twisting and twirling foliage associated with the Art Nouveau style. Influenced by the avant-garde art theories of his day, including the Dutch artistic movement known as De Stijl, the Bauhaus movement and the advent of Cubism, Louis Cartier redefined elegance in a spirit of less is more, reaching a subtle balance between form and function.

The 1917 Tank watch was an exercise in restraint.  With its brushed platinum case and elongated polished flanks – simulating the treads of a tank – the Tank was thoroughly modern, streamlined and, in turn, très chic, an intrepid forerunner of the Art Deco movement.

Louis Cartier’s talent lay in design and the technical aspects of watchmaking were entrusted to watchmaker Edmond Jaeger (of Jaeger-LeCoultre fame), allowing the designer total creative freedom. Key identity traits of the first Tank watch were the sober geometric case made from platinum, the radiating Roman numerals, the railway track minute counter, the blued-steel hands with apple-shaped apertures at the tips and the blue cabochon-cut stone in the winding crown. Another distinctive feature of the Tank was the incorporation of Jaeger’s ergonomic folding buckle, below, giving the watch strap a more streamlined look and offering the wearer enhanced security over a regular pin buckle.

It is interesting to note that Cartier relied on third-party suppliers of movements throughout the 20th century and didn’t fall into the temptation of designing and producing its own in-house calibres until 2008. Cartier’s adventure in high watchmaking, under the inspired guidance of Carole Forrestier, produced some prodigious high horology specimens but was abandoned in 2016. Today, the focus is on pursuing what Cartier does best, which is designing timeless objects for a larger market.

The list of famous people who have worn a Cartier Tank watch throughout the last century is as colourful as it is varied. General Pershing, commander of the American Expeditionary Forces in Europe, was reportedly given a prototype of the Tank watch in November 1918 for his crucial role in the Great War. However, the story that takes the cake is attributed to Rudolph Valentino, above, and his odd request of being allowed to wear his Tank wristwatch while filming The Son of the Sheik in 1926. The incongruity of the Middle Eastern props and costumes with the modern watch on his wrist is amusing to us today, but it does attest to the passion this watch has inspired among its wearers.

Having made its big-screen debut, Cartier’s Tank watch was soon being spotted on the wrists of actors and actresses alike, including Clark Gable, Gary Cooper, Greta Garbo and Tallulah Bankhead. The fact that the watch appealed to both men and women only strengthened its cause and American first ladies Jackie Kennedy and Michelle Obama, as well as Britain’s Lady Di, above, have all succumbed to its charm. The Tank also appealed to counterculture figures like Patti Smith and Andy Warhol, below, who famously said: “I don’t wear a Tank to tell the time. In fact, I never wind it. I wear a Tank because it’s the watch to wear.”

Evolution of the Tank

As any long-living species will confess, adapting to your environment is the secret to success. The original Tank, rechristened the Tank Normale in 1919, has undergone 35 mutations over its 100 years of life without drastically altering its character.

The first metamorphosis occurred in 1921 with the Tank Cintrée, a more elongated and curvaceous descendant designed to sit beautifully on the wrist, followed by the Tank Chinoise, which captured the chinoiserie style so in vogue during the Roaring Twenties.

In 1922, the Tank LC (Louis Cartier) shed some of its flat geometry, giving the frame of the watch a rounded, softer finish. The Tank à Guichets of 1928 would be the first Tank to incorporate a complication and featured a digital time display with jumping hours and minutes peeking out from behind two windows cut into the metal dial. Water-resistance was the next challenge, and in 1931 Cartier advertised the Tank Étanche immersed in a beaker of water. Similar in vocation to Jaeger-LeCoultre’s Reverso, which was designed for polo players, Cartier produced the Tank Réversible watch (later known as the Tank Basculante) in 1922, allowing the dial side to be hidden for protection thanks to a clever tilting mechanism.

Although the quartz crisis of the late 1970s practically decimated the Swiss mechanical watch sector, Cartier, which sourced most of its movements from third parties and had never really considered itself a maker of calibres, was largely unaffected and was quick to adapt to the revolutionary technology. In 1989 the Tank became robustly Américane, while in 1996 it reverted to its original French nationality with an integrated metal bracelet that looked exactly like the caterpillar treads of a tank. In 2012, the Tank Anglaise rolled on to the scene.

Celebrating its first centenary in 2017, it is fair to say that the Cartier Tank watch has serious traction. One of the most iconic watches of all time, it is primed to enjoy many more years of popularity. 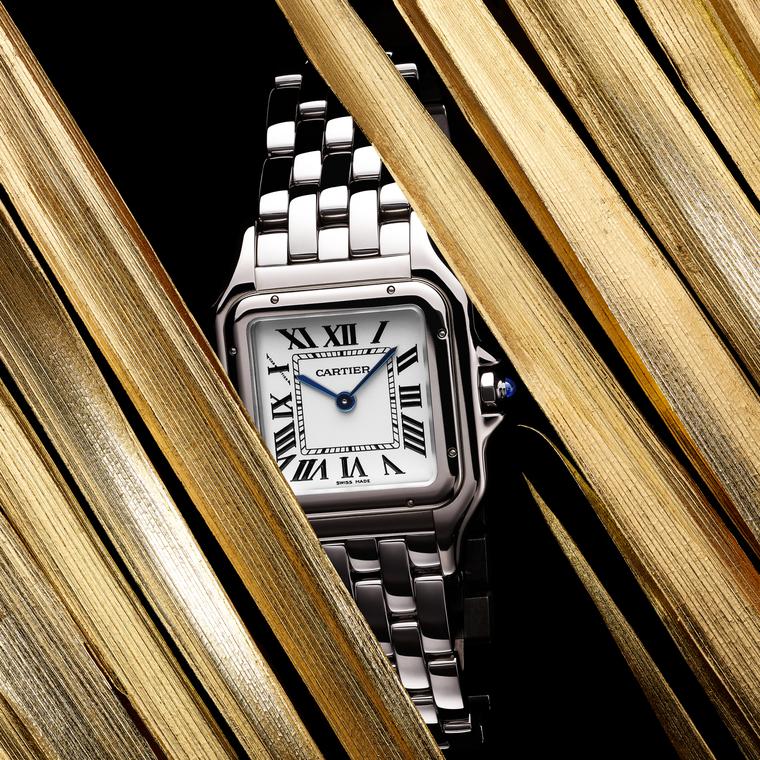