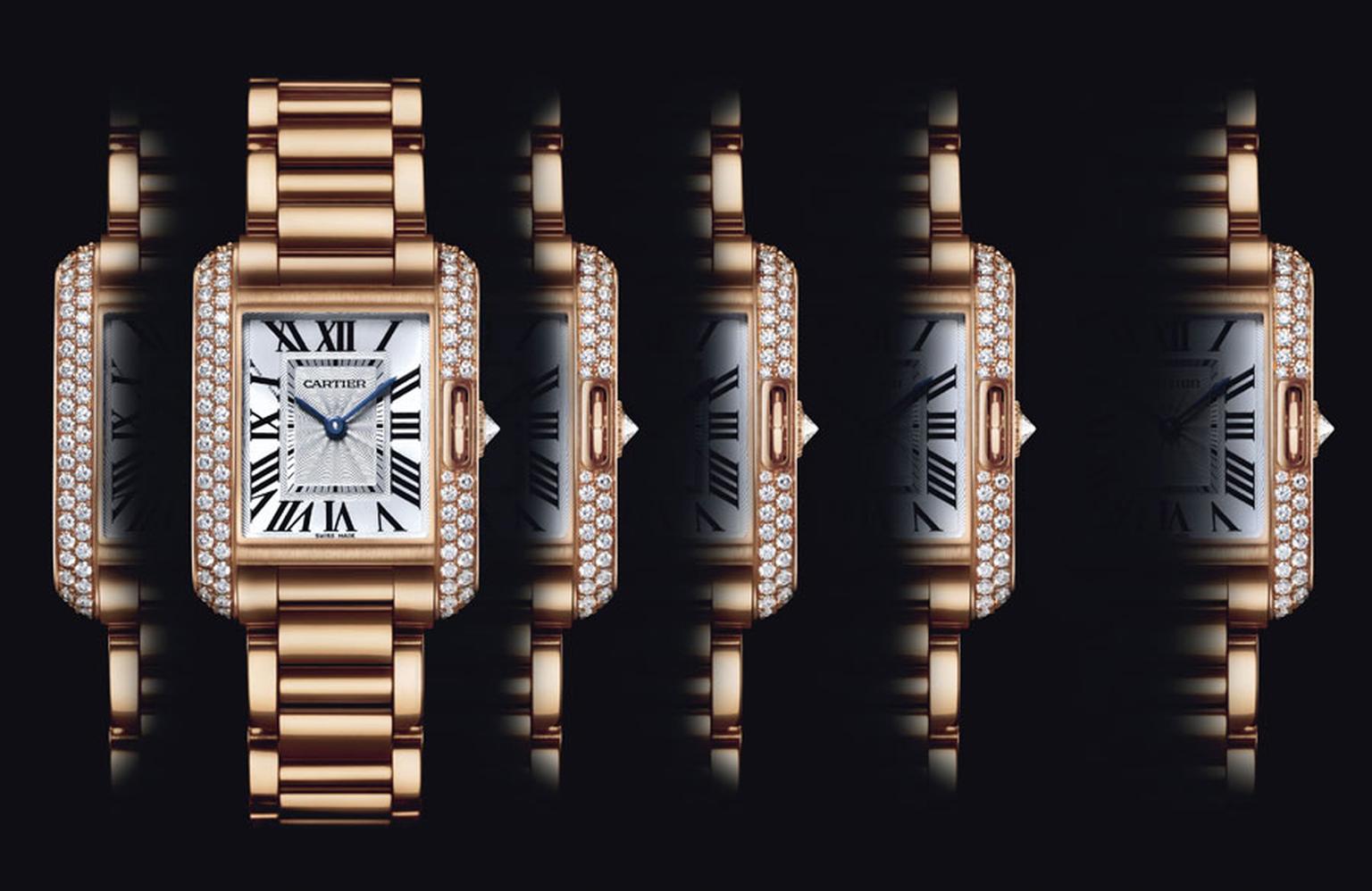 A mere glimpse of a Cartier Tank on a passing arm is an instantly recognizable and evocative beacon. And now there is a new Tank that speaks to the heart of our nation: the Tank Anglaise.

But how is it that the Tank, created in 1919 has to be one of the most enduring and successful watch designs of the century? It ranks amongst some to favourite objects, up there with the Volkswagen Beetle, the Vespa Scooter and the Angle Poise lamp.

The Tank was a wrist worn revolution that shunned the fashion of the times that favoured twirls and ornamental twists. Instead the Tank boldly presented a rigorous, clean-lined purity.  A manifestation of the breakneck speed of progress that in a few decades brought man the automobile, the first transatlantic flight, factories and the Eiffel tower.

At the time of the Tank's birth, wristwatches in themselves were a novelty. The traditional gent still preferred a pocket watch, but the brilliant and forward thinking creator of the Tank, Louis Cartier, was working on a his particular evolution of the timekeeper as it moved out of the pocket and on to the wrist.

Like all great design, it was born of necessity. The necessity was to create a watch that could be worn on the wrist and resist enemies to which it was now more exposed to such as dust, water, temperature changes and shocks. Early wristwatches were no more than pocket watches, which were invariably round, strapped onto the arm. The challenge was to create a square watch that still looked elegant and would welcome a strap and that could easily be used with just one hand.

The result was the Tank and it was the unadulterated result of one man's vision in a time long before we had "lifestyle" products dreamt up by committees or aspirational marketing cluttering up our lives. Forget namby-pamby focus groups, it was the armoured tanks rolling through the streets of Paris in 1917 during WWI that inspired Louis Cartier to create a case that resembled a horizontal cross section of a Renault tank. A powerful symbol that captured the zeitgeist of the brave new world of war, aviation, automobiles and social change that faced Louis Cartier as he gazed on the boulevards of Paris ravaged by war.

The Tank was a no frills wristwatch and completely new. It was neither a technical instrument bristling with buttons and subdials nor did it veer to the other extreme and pander to the decorative tendencies of the day. It was a watch for a modern man of action in a modern world. It was a way to wear on your wrist the optimism and belief in the age of Science.  A prototype was presented to General John Pershing, commander of the American Expeditionary Foreign Force in Europe, endowing the Tank with a stamp of authority, respectability, ruggedness and bravery, that his since been the timekeeper of choice of virtually every celebrity from Fred Astaire to Andy Warhol.

From this unusual start in life, the Tank has transcended its expected life span and become an icon, an object that exudes emotional and irrational feelings beyond a mere timekeeper.  And Cartier has an enviable track record when it comes to creating iconic products. The Cartier family was blessed with a creative arrogance that permitted them to look beyond common consensus and tap into deeper emotions of their time. The Cartier clan showed a willingness to embrace ground-breaking designs, whether it be a sapphire encrusted panther created in 1948 for Wallis Simpson, the Duchess of Windsor or the Santos watch with its practical screwed down crown for the jaunty Brazilian aviator Alberto Santos du Mont as he flew his newfangled airplane around Paris.

But here is the brilliance, a controversial object may have inspired the Tank, but the Tank's survival has not been left to fate. The Tank with its distinctive case shape, matt silver dial, Roman numerals, blued steel Breguet hands, chemin de fer chapter ring and  of course, that delicious detail, the cabochon sapphire set into the winding crown has kept up with the times. The Tank Normale, Cintrée, Chinoise, a Guichets, baguette, Etanche, Basculante, Asymetrique, Rectangle, Mini Allongée, Must, Americaine, Française, Divan are but some of the forms of this adaptable design. The new Tank Anglaise, is more curved and voluptuous than the original pared down lines of the Normale and the winding crown is set into an aperture in the side of the case.

A fine line has been walked between remaining faithful to the original 1919 Tank yet maintaining its desirability. But whatever tweaks and touch-ups it has undergone, so distinctive is its look, that a Tank is always a Tank even after nearly a century of marking the passing of hours in style.

Read about the Cartier Tank in our top five iconic watches