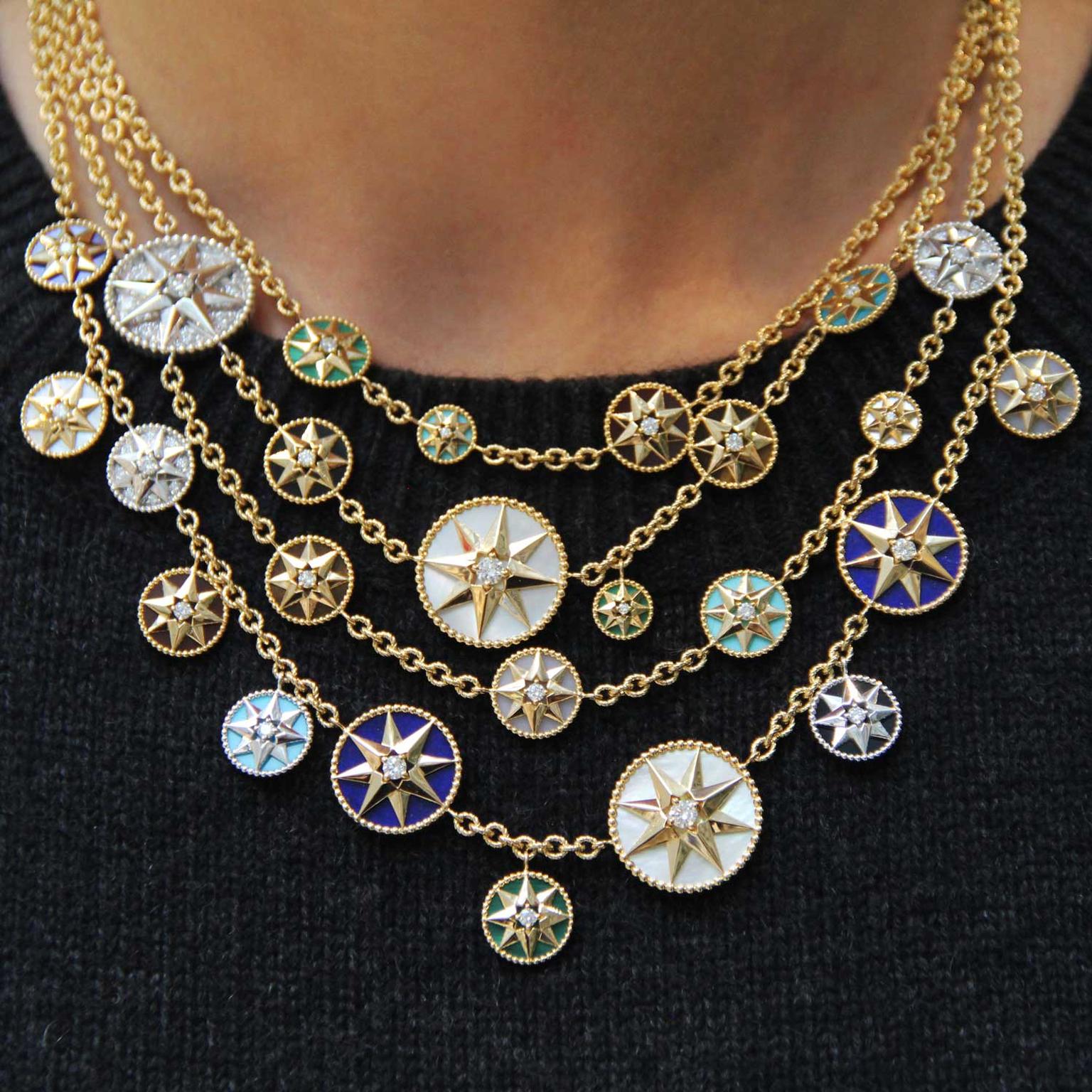 Victoire de Castellane, the maverick genius behind jewels and watches chez Dior, once again turns to Monsieur Christian Dior for inspiration. In her imaginary world of Rose des Vents, or wind rose, she travels through time with her avuncular muse, guided by the talisman-like wind rose, or compass, that features on every Rose des Vents jewel.

To bring the story to life, de Castellane has drawn sketches and created little cartoon films of these voyages in bright felt-tip colours, infused with a joyful innocence and an irreverent sense of humour. Because, in Dior’s design studio, jewellery is made to make you smile. From Marie Antoinette-style romps in a formal French garden to psychedelic dinosaur encounters and space adventures, the eight-point wind rose adorning each Rose des Vents jewel and, new this season, watch is the unlikely duo’s infallible guide.

But why the wind rose symbol? Victoire de Castellane reveals: “Behind the symbol of travel, we find Christian Dior’s star and the idea of a good luck charm, but also the rose, his favourite flower.” The rose and wind rose both hark back to Christian Dior’s childhood and his family seaside holiday home in Granville, Normandy. Maritime themes and particularly the wind rose or compass were dotted around the house and grounds, and it was in the rose garden there that the young Christian spent many hours learning to grow roses alongside his mother, an accomplished horticulturist.

The Rose des Vents jewels bring together the ancient symbol of the wind rose with the vivid and rich colours of hard stones, and each jewel or watch has been thought out to allow the wearer to play with it. Strung on slender chains or designed to be worn in two ways, the medallion-like discs spin and twist, throwing out flashes of glossy rich colour or the fire of diamonds.

On one side of each medallion is a smooth hard stone or a sea of diamonds; turn it over and an eight-point star forms a compass, surrounded by a braid of gold. Rings flip, watch dials come alive with spinning wind roses and charm bracelets show two very different faces. These bright little discs are treasures to be worn every day and whichever way takes your fancy.

The wind rose also adorns the new, mini-sized La D de Dior watches. Malachite, opal and mother-of-pearl dials come alive with the rotating eight-point star, which is set in motion with every twist of the wrist. Watch it spin in my video, below:

The most impressive Rose des Vents jewel is the colourful multi-tier bib-style necklace, below, with 25 different-sized medallions strung in a random pattern along four strands. The necklace can be worn stone- or rose des vents-side up, or each medallion can be twisted individually to create your own mix-and-match look.

The stones themselves have been chosen not just for their beauty but their character also: sea-blue turquoise to invoke a zen-like calm; pink opal for protection; lapis lazuli for friendship; diamonds to symbolise purity; malachite for healing; onyx to bring positive energy; and mother-of-pearl to spread an aura of femininity.

With the Rose des Vents jewels and watches there is no need to compromise on fun as Victoire de Castellane and her muse Monsieur Dior combine the joy of colour and movement with the timeless symbols of good fortune. 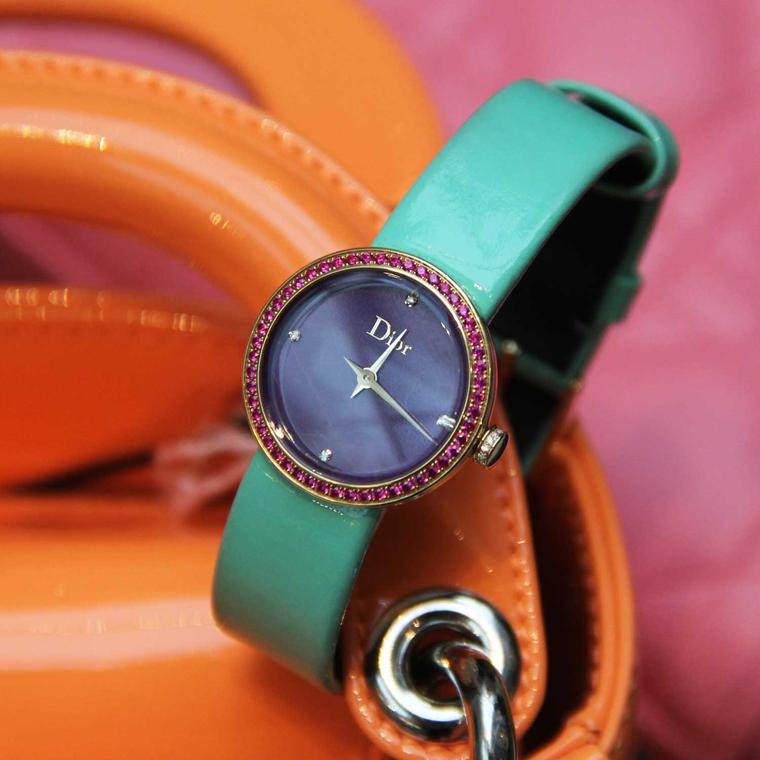 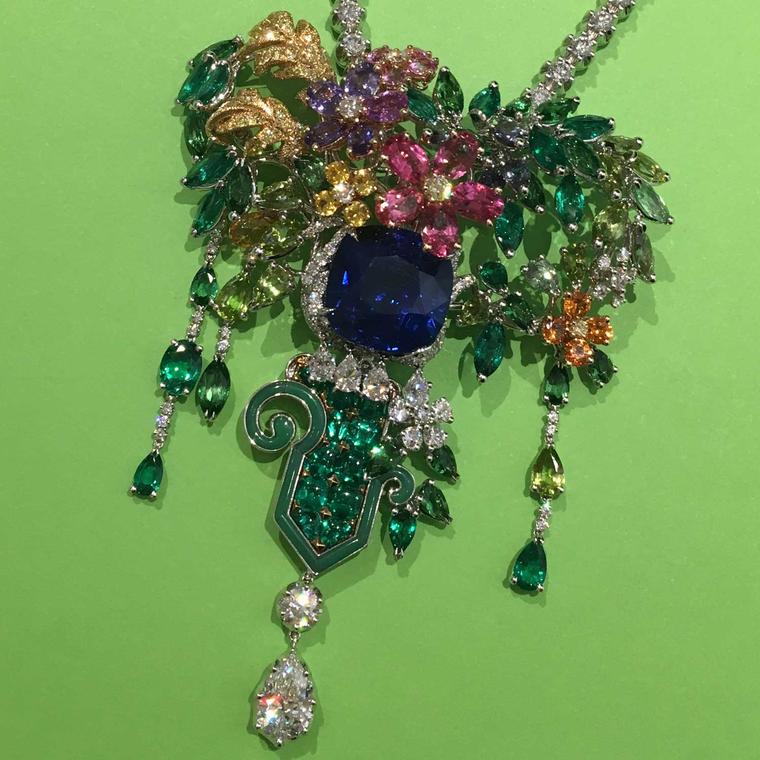