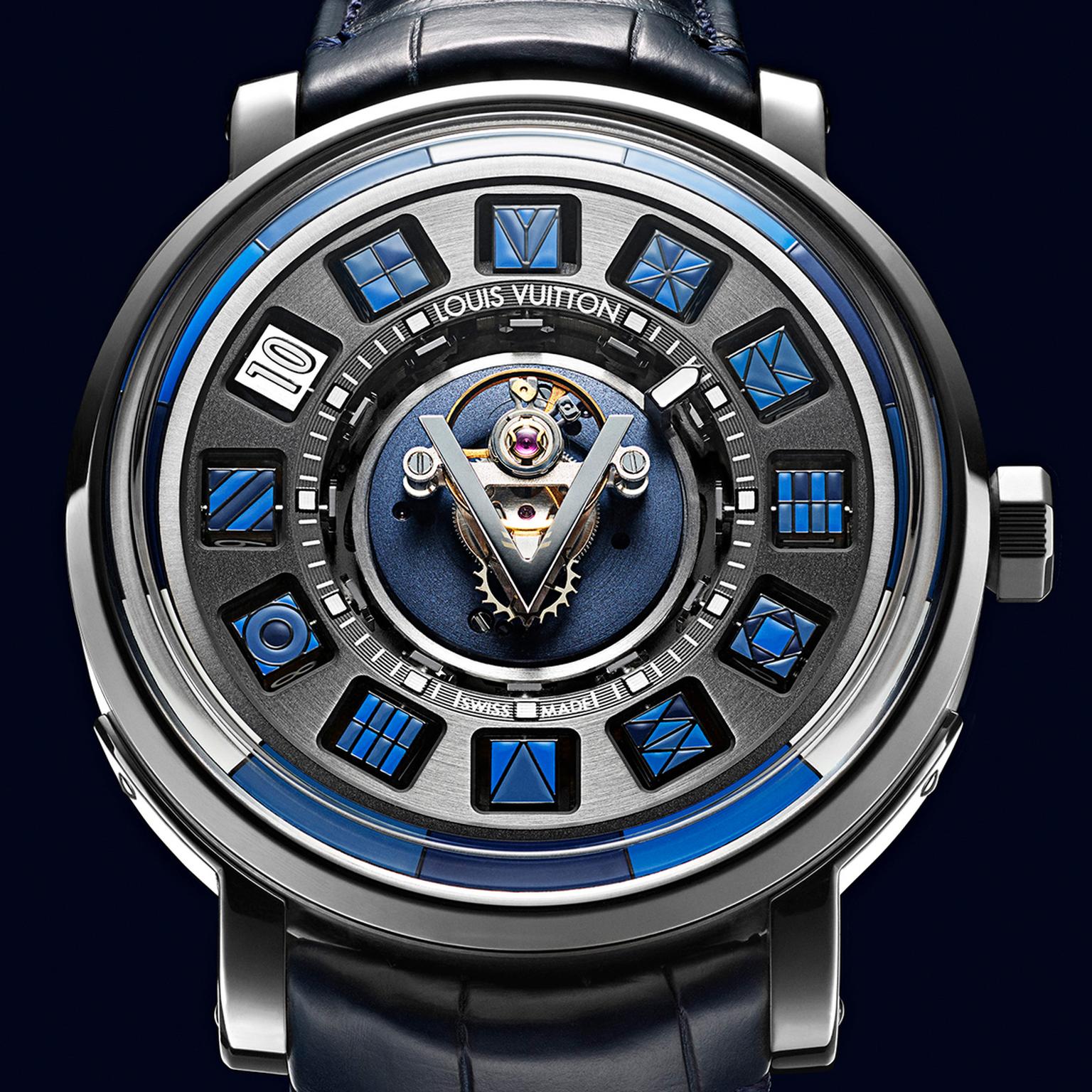 For a luxury emporium that consolidated its success on steamer trunks and luggage, the art of elegant travel is an encompassing theme and defines the spirit of many Louis Vuitton products. And since travelling is intricately related to timing and often involves crossing different time zones, it was a natural move for Louis Vuitton to venture into the terrain of watchmaking.

Embarking on a serious watchmaking voyage is not without its perils, and Louis Vuitton has its very own manufacture, La Fabrique du Temps Louis Vuitton in Geneva, one of the finest Swiss watchmaking companies renowned for its pioneering approach to complications, daring yet intuitive solutions and contemporary design codes. Fully acknowledged as a key player in the haute horlogerie spheres, Louis Vuitton’s ethereal Voyager Flying Tourbillon model from 2016 was distinguished with the Geneva Seal and its colourful, chiming masterpiece, the Escale Worldtime Minute Repeater, is the stuff of horological history.

Into the deep blue yonder

For 2017, Louis Vuitton revisits three travel companions from the Escale family in different shades of blue, a colour that is currently dominating the watch scene, from the intense navy of the deep ocean to the changing hues of a summer sky. Housed in  41mm Escale cases, the case is recognisable by the design details alluding to Louis Vuitton’s trunks, with corners similar to those used on the classic trunks and protective riveted plaques on the lugs.

Ever since its launch in 2010, Louis Vuitton’s Spin Time complication has changed our way of viewing time in the most delightful way. Based on an innovative and playful way of reading time – thanks to the exceptional watchmaking know-how of La Fabrique du Temps – the Spin Time consists of 12 cubes that rotate on the hour.

In the new Escale Spin Time Blue model, each cube is decorated on four of its sides revealing the a.m. and p.m. times as well as two pictograms inspired by motifs used on Louis Vuitton’s classic trunks. So, if it’s 10 o’clock at night, the corresponding cube will rotate to display the number 22, giving the watch an ingeniously simple day and night functionality.

The central world globe placed on a sapphire crystal disc evokes the theme of world travel and features a lone white minutes hand. The Escale Spin Time Blue comes in a 41mm brushed titanium case with a white gold bezel, lugs and crown beautifully framing the elegant blue colour palette of the watch.

Marking a milestone in watchmaking history, Louis Vuitton unveils the Escale Spin Time Tourbillon Central Blue, a mesmerising watch combining the magic of rotating cubes to tell the time with a flying tourbillon in the centre of the dial. The first time this combination has ever been achieved in horological history, Louis Vuitton’s  watchmaking division shows exceptional bravado in this marriage of two extremely complex complications.

The V-shaped tourbillon carriage, below – inspired by the famous V signature that Gaston Vuitton invented in 1901 to decorate the Steamer Bag – doubles up to indicate the seconds and to maintain the lean silhouette of the watch case, while a sapphire crystal dome protects and amplifies the graceful whirling tourbillon. A contemporary take on the jumping hour, the rotating cubes add an element of movement and surprise. The cubes feature four decorated facets, one displaying the p.m times, one for the a.m. times and two handcrafted pictograms highlighted in blue tonalities.

The new rendition of Louis Vuitton’s Escale Time Zone watch in a blue palette brings you the advantages of a first-class world time watch at an extremely attractive price. Allowing you to consult local and home time, as well as the time in 24 cities around the globe, in an intuitive manner, the Escale Time Zone Blue is incredibly simple to use and a joy to behold. By adjusting the crown to match the time in your home city, local time is displayed in the centre and the 24-hour time zones can be consulted at a glance.

Working from the centre of the dial out, a world globe bearing the brand name and the words Time Zone announces the vocation of this watch and bears the triangular hour marker and baton-shaped minutes indicator. A 24-hour disc is encircled by two more prominent discs, with the abbreviations of the 24 cities chosen to mark the world’s 24 time zones.

The names of the cities in white are set against a dark blue background for superior legibility and separated by geometric motifs in different shades of blue. The motifs, individually rubber-stamped by hand, one colour at a time, are in fact inspired by the bespoke markings owners would use to distinguish their trunks back in the 19th century when travelling by steamship or train was considered the height of luxury. Sometimes just their initials or family crests were enough, at others more distinctive pictograms were used to make sure luggage didn’t get lost on the crowded platforms or in foreign ports. 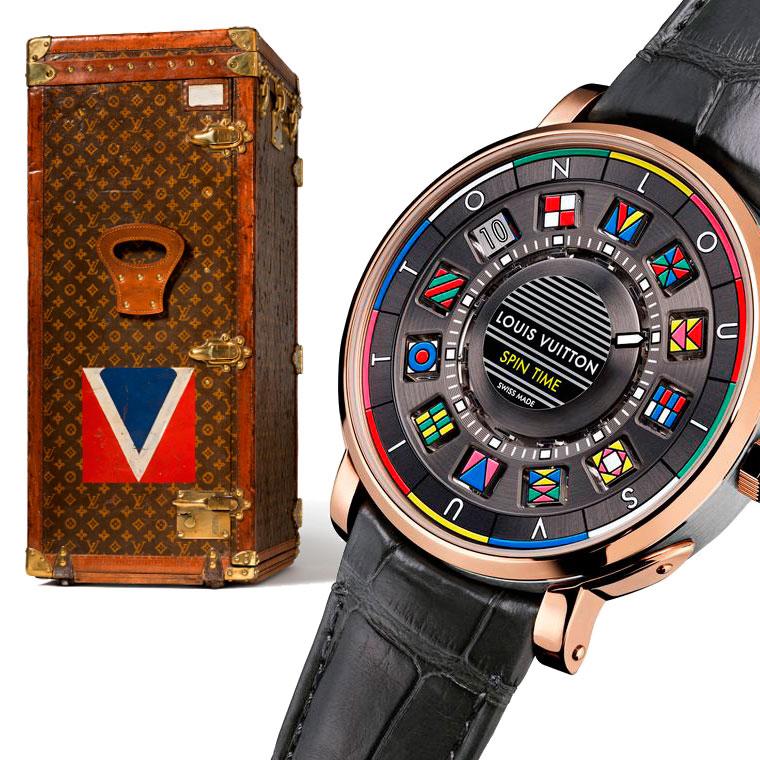 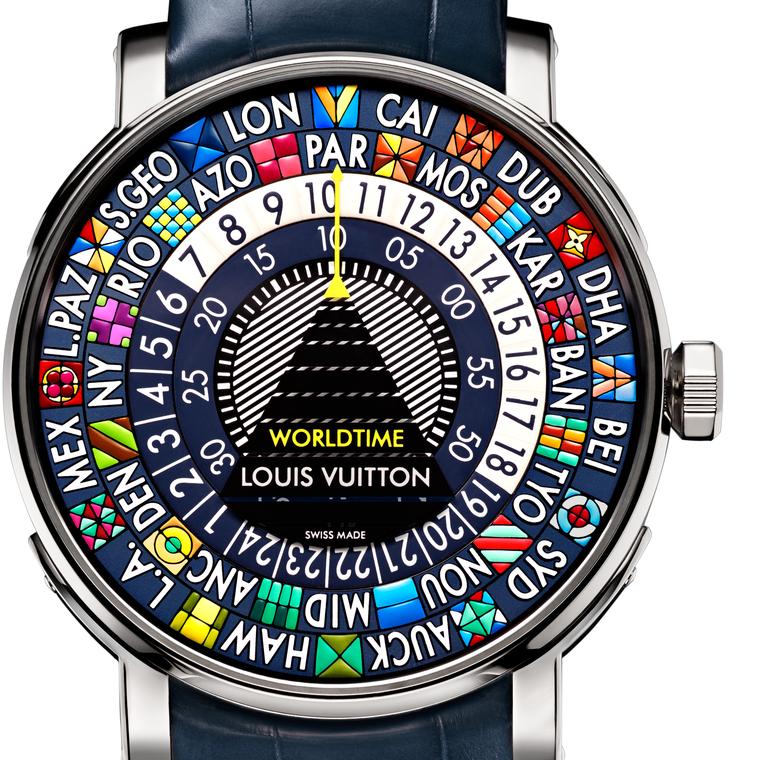 Louis Vuitton takes the Escale for a spin