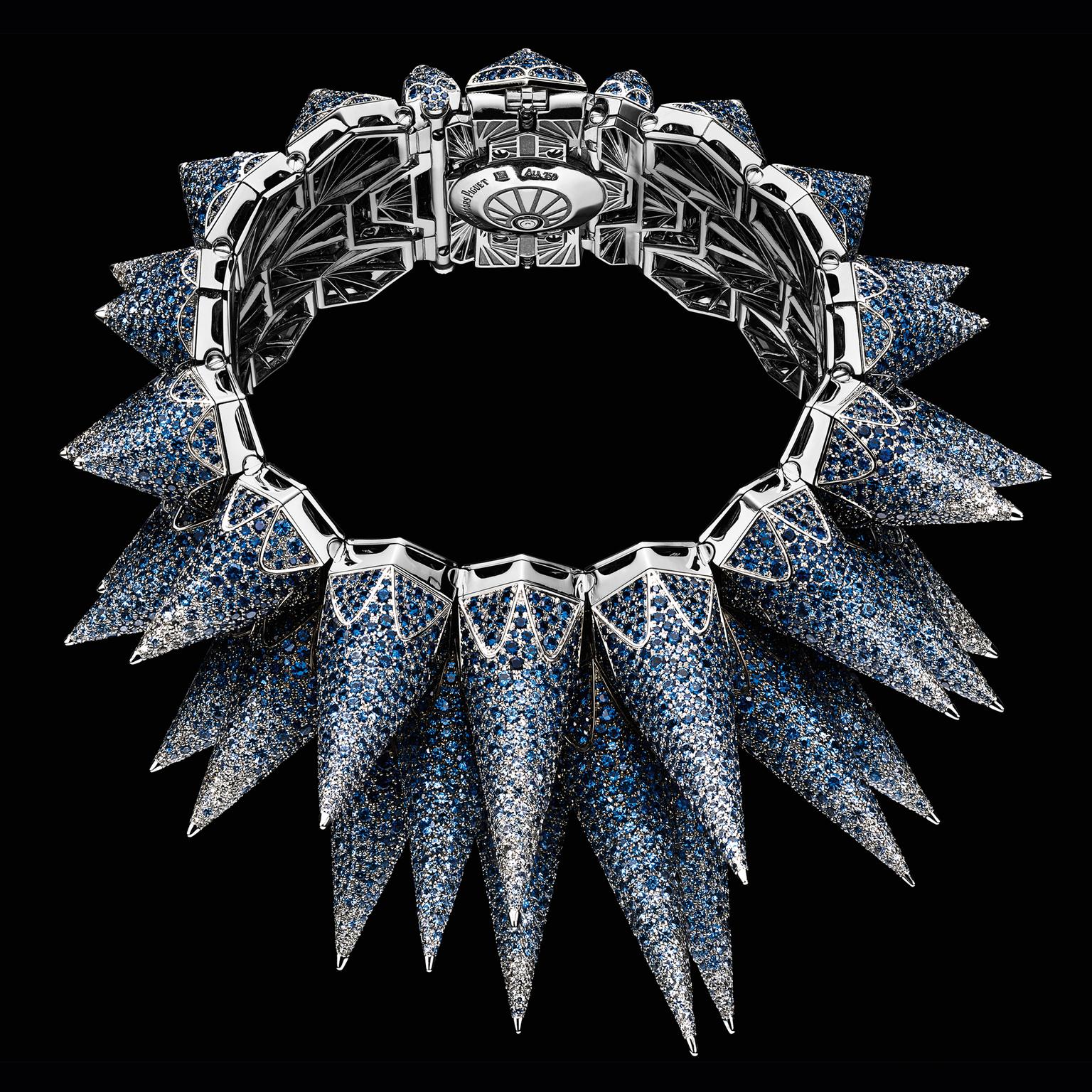 With a rebel yell

The third and final design in the trilogy of audacious diamond watches, Audemars Piguet pulls no punches with the Diamond Outrage secret watch. Blistering with explosive spikes that will knock out anybody who gets too close for comfort, the Diamond Outrage will be the talking piece of any cocktail party.

Where some people see frozen stalactites, others see pointy Alpine peaks or stylised conifers. But whichever way you look at it, it is bound to provoke some kind of a reaction.

Like her sisters, the Punk Diamond of 2015 and the Diamond Fury of 2016, Diamond Outrage flaunts its rebellious, non-conformist nature. Drama is of the essence here and a chain of conical-shaped spikes circle the articulated white gold bracelet. The spikes, much like those stiff, gravity-defying Mohican hair styles of the early 1970s punk movement, are the work of countless hours of gemstone grooming.

Composed of different-sized spikes, ranging in height from 29.30 to 40mm, the Diamond Outrage is entirely blanketed with freshly fallen snow in the shape of brilliant-cut diamonds or sapphires.

The beauty of this cuff watch derives from the snow-set gemstones, a technique in which a master gemsetter bores holes of different diameters in the underlying gold structure and then sets different sizes of diamonds in such close proximity that the underlying frame literally vanishes from sight. On the white diamond model, above, the art of invisible setting has been used to sheathe three peaks with baguette-set diamonds.

The blue sapphire version, above,  is set with 11,043 brilliant-cut sapphires in degradé colours and intensities of blue, while the fully-set white diamond model, below, boasts 9,923 brilliant-cut diamonds and 354 baguette-cut diamonds. Beautifully constructed, the bracelet hides a secret watch under the less pronounced spikes, placed on the inside of your wrist.

To consult the time, two mechanical hinged doors open to reveal the hidden timekeeper. The price of this watch was not revealed during the SIHH watch salon of 2017, but can be requested, if you dare... 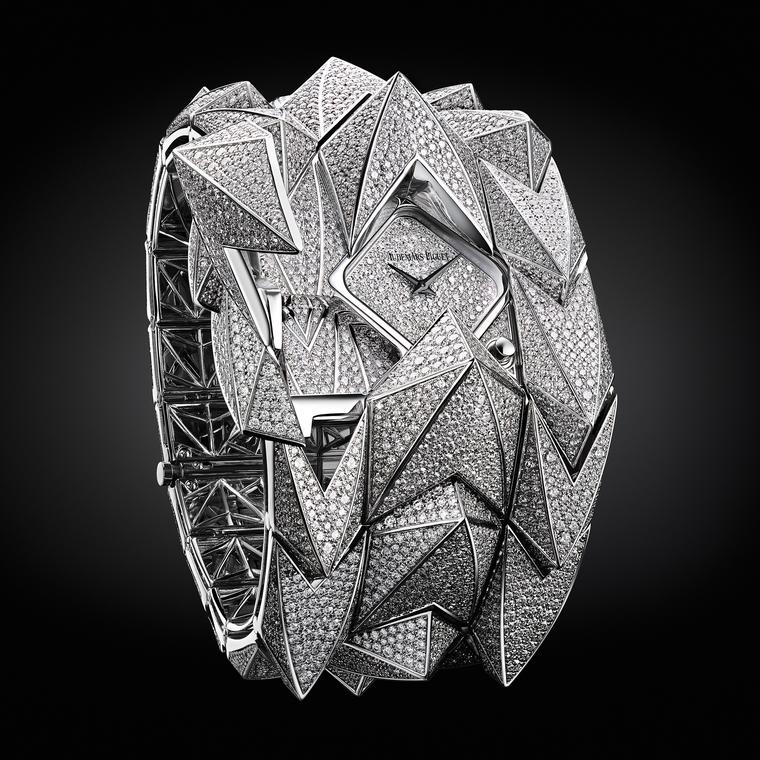 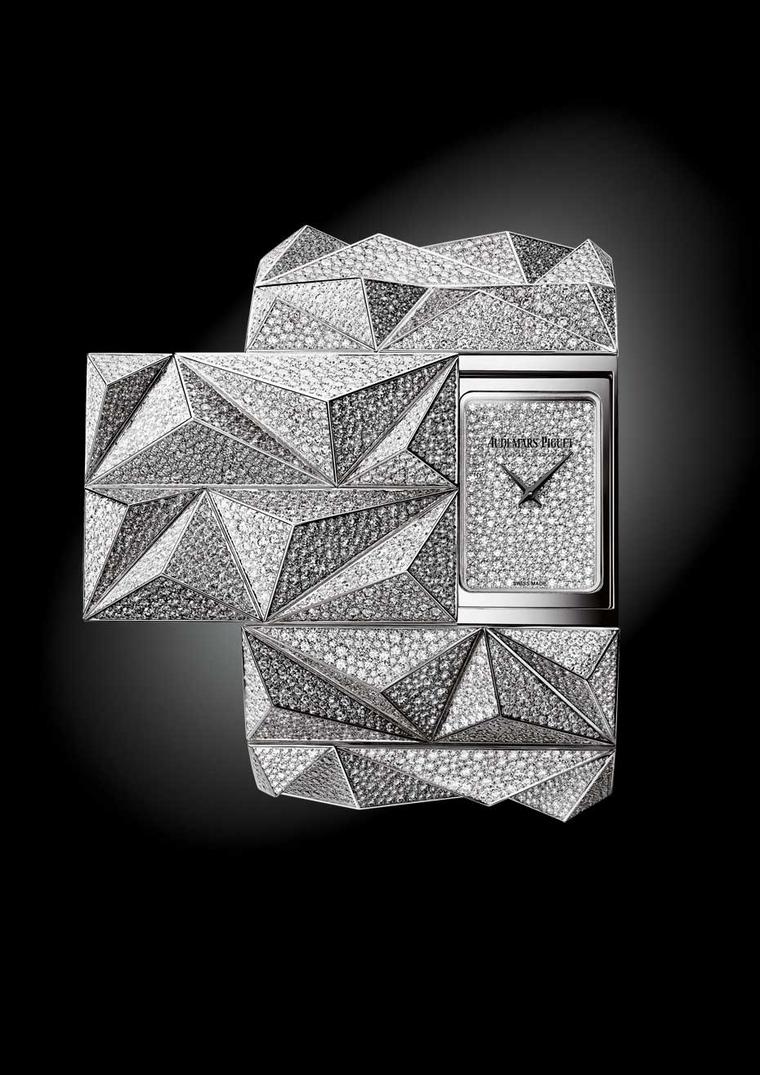