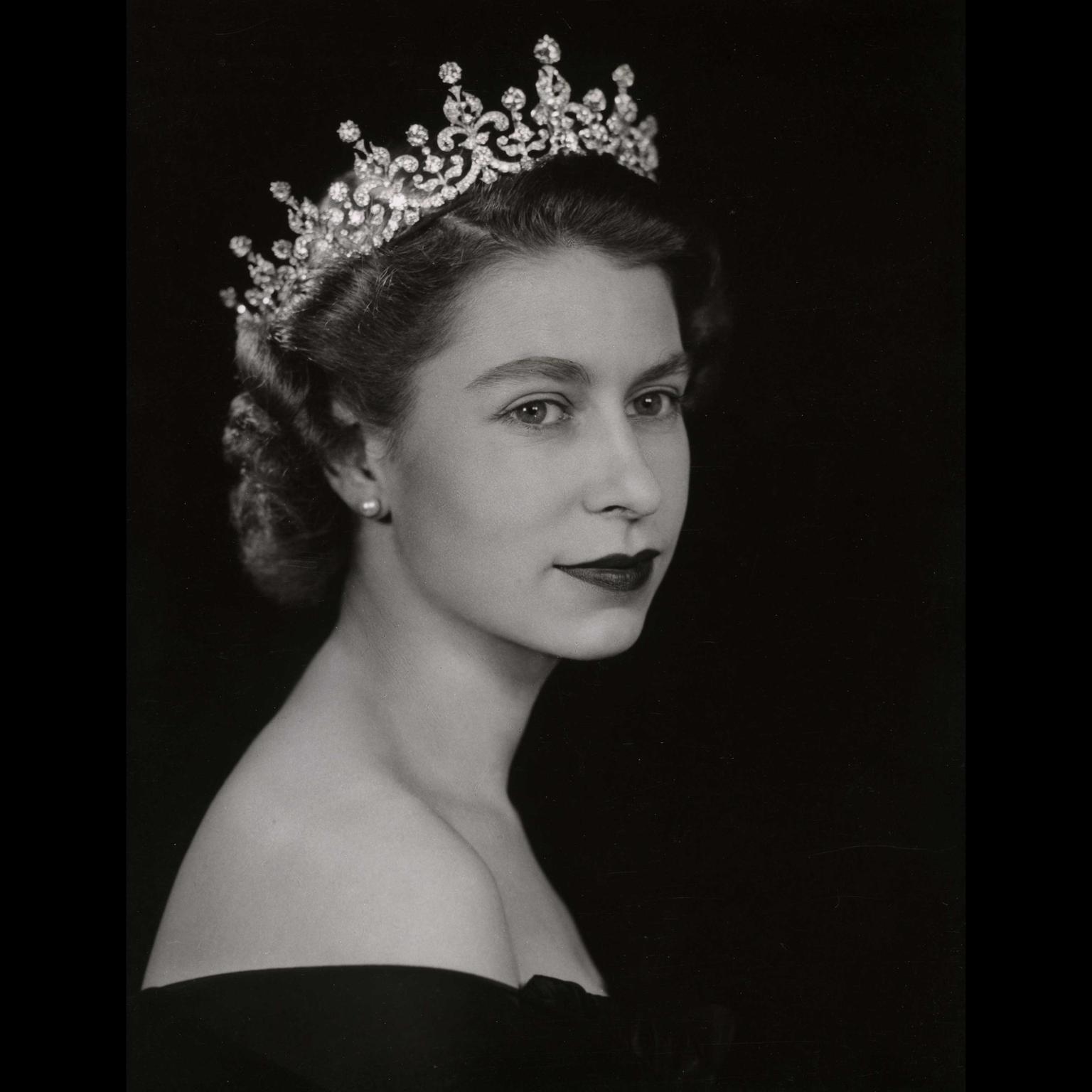 The late Queen Elizabeth’s jewels are not only some of the most valuable and spectacular of any collection, but intimately linked to our memories of this outstanding monarch. But which ten jewels are most closely connected to our shared recollection of the Queen?

Which are the ten most memorable jewels worn by the Queen?

I have selected ten jewels from majestic, dazzling tiaras to the ever-present, low-key pearl necklaces that are associated with the 70-year reign of Queen Elizabeth II. Each of these holds a memory of this remarkable woman who was part of all of our lives. Read on to discover our selection.

Who owns the Queen’s jewels?

This question is often asked and the jewels the Queen wore were a mix of the Crown Jewels that are in held in trust for the Crown and passed from monarch to monarch as well as her own jewels that are her personal property.  But let’s start with the crowns that she wore at her coronation, the most important moment in her public life.

Crowns are the jewels most intrinsically linked to royalty so the number one jewel is the Imperial State Crown that the Queen wore departing from her coronation. But more than one crown was used.

How many crowns did the Queen wear during her coronation?

Read more about Cecil Beaton's portraits of the Queen here

Which is the most memorable crown?

The Imperial State Crown was made by Garrard and Company for the 1937 coronation of Elizabeth’s father, George VI.  To make it more suitable for the petite 5 foot 4 inch Queen, alterations by Garrard included lowering the arches of the crown as well as re-sizing the band. The Imperial State Crown is set with some of the most spectacular gems in the Crown Jewels: the 317.4 carat Cullinan II diamond, as well as the Stuart Sapphire and the Black Prince’s Ruby. The Imperial State Crown and St Edward’s Crown are part of the Crown Jewels that are kept at the Tower of London. The Diamond Diadem is from the Queen's own collection and stored in a vault, along with her other jewels, under Buckingham Palace.

Which crown is the Queen wearing on postage stamps and currency?

The Diamond Diadem (above) follows the Imperial State Crown in fame as the Queen wore it on her way to her coronation as well as in 1952 to the first State Opening of Parliament of her reign.  Since then, the Queen has worn it to every State Opening making it a highly visible jewel. This crown was made by Rundell, Bridge & Rundell in 1820 and is set with 1,333 diamonds and a pale yellow diamond inside the front cross, all resting on a pearl and diamond bandeau. The motifs of the thistle, rose and shamrock are symbols of Scotland, England and Ireland and therefore symbolic of the unity of the nation. The Queen is shown wearing this diadem on some British stamps making it instantly recognisable around the world.

What is the history of the Coronation necklace and earrings?

Another unforgettable jewel that makes up the ten most memorable worn by the Queen are the Coronation Necklace and Earrings (above) that Her Majesty also wore at her coronation and on many other high profile occasions.  After Queen Victoria lost a significant number of jewels to her relatives the Hanovers, Garrard was commissioned to remove diamonds from swords and other little-used items in the Queen’s collection to make up the necklace. The simplicity of the design allows the 25 graduated cushion-shaped brilliant-cut diamonds and a central drop-shaped pendant of 22.48 carats to shine. The necklace and later matching earrings were subsequently worn by Queen Alexandra, Queen Mary and Queen Elizabeth (The Queen Mother).

Which is the most famous tiara worn by the Queen?

After the Diamond Diadem, The Girls of Great Britain and Ireland Tiara (above) is one of the most recognisable jewels from the Queen’s own collection. The Queen wore the Girls of Great Britain and Ireland tiara on some Bank of England and Commonwealth currency notes and coins making it one of the most iconic jewels in her collection. Lady Eva Greville, one of Queen Mary’s ladies-in-waiting, headed a commission to raise funds for the gift of the tiara made by Garrard & Co in 1893. The occasion was the future Queen Mary’s marriage to George VI in 1893. The tiara is designed so that it can be unclipped from its frame and worn as a necklace. The original version was tipped with pearls but Queen Mary replaced these with 13 impressive diamonds from the Surrey tiara. Queen Mary was known for her love of jewels and was ever recycling and re-modelling pieces and these pearls were then set into the Lover’s Knot tiara.

The most valuable brooches worn by the Queen

The Queen made an art of wearing jewels, and particularly brooches that are so suited to her duties. Worn high on the left shoulder they are visible even when sitting in a car or carriage. They can be worn on coats for outdoor events and are the largest of all jewels that can be worn both day and night making them easy to spot from faraway. Though it is not the most valuable, one of the brooches she wore regularly is the Dorset Bow brooch (above) given to the then Princess Elizabeth by her grandmother Queen Mary for her wedding in 1947.

Most impressive and valuable of all the Queen’s brooches is the Cullinan brooch (below). The brooch is composed of diamonds II and IV from the 3,106-carat rough stone discovered in the Premier Mine in South Africa, in 1905. The diamond was given to King Edward in 1907 by the Transvaal Government and sent by post in a teapot, while a decoy travelled via a highly publicised sea voyage.

What are Granny’s Chips?

The largest of the nine important diamonds cut from this stone is the 530-carat Star of Africa set into the Royal Sceptre and part of the Crown Jewels. The eight ‘Lesser Stars of Africa’ as they are known, were made into jewels including this brooch (above) with its pear-drop Cullinan III that weighs 94.4 carats and hangs from the square-cut Cullinan IV of 63.3 carats.  The brooch was jokingly referred to as ‘granny’s chips’ by Queen Elizabeth II during a visit to the Asscher Diamond Works in Amsterdam in 1958 as it was her grandmother, Queen Mary who had commissioned the jewels 50 years earlier. A further 2 brooches and a ring were made from other smaller stones.

The most memorable necklace worn by the Queen

Another of the Cullinan diamonds (8.8 carats) hangs from the Delhi Durbar necklace (above). With its magnificent emeralds and dazzling diamonds, it was often worn by the Queen at State dinners. The necklace features nine emeralds originally owned by Queen Mary’s grandmother, the Duchess of Cambridge, who won them in a German state lottery in Frankfurt in 1818. The necklace was the centrepiece of the jewels created for Queen Mary for the final 1911 Delhi Durbar in India at the height of the British Empire. The Queen inherited the necklace in 1953.

Does the Queen own a pink diamond?

The Williamson brooch (above) is one of the few jewels that was not inherited by the Queen that she has worn to many key events including her Silver Jubilee celebrations. The Queen also wore it for the weddings of the Prince of Wales and Diana in 1981 as well as the marriages of Lord Linley, the Countess of Snowdon in 1993, and Prince Edward in 1999.

The 54.5-carat rough pink diamond was given to the Queen in 1947 as a wedding present from the Canadian geologist, Dr. John Thorburn Williamson, owner of the Mwadui mine in Tanzania. The pink diamond was set in a white diamond flower brooch designed by Frederick Mew of Cartier, London, in 1953 and is one of the prettiest of the newer jewels in her collection.

Which jewel has the Queen worn most often?

In almost every image of the Queen, you can spot strands of pearls. The Queen’s first piece of serious jewellery was a three-row pearl choker given to her when she was eighteen years old when her grandfather King George V celebrated his Silver Jubilee. The Queen has also been seen wearing the double strand of larger pearls (above) that had originally been part of the Hanoverian collection.

What jewels was the Queen’ given on her 21st birthday?

The South Africa necklace and bracelet (above) was given to the young Princess Elizabeth on her 21st birthday in 1947 by the Government of South Africa. It was made by Garrard & Co in London and the necklace was presented to the Princess during her parents’ tour of South Africa at her birthday ball. The necklace was set with 21 graduated round brilliant cut diamonds, separated by baguette diamonds. It was later adapted and made into a shorter necklace and bracelet.

PREVIOUS ARTICLE It’s radical! Enamel jewels go pop NEXT ARTICLE Who owns the Queen's jewels and who will inherit them? 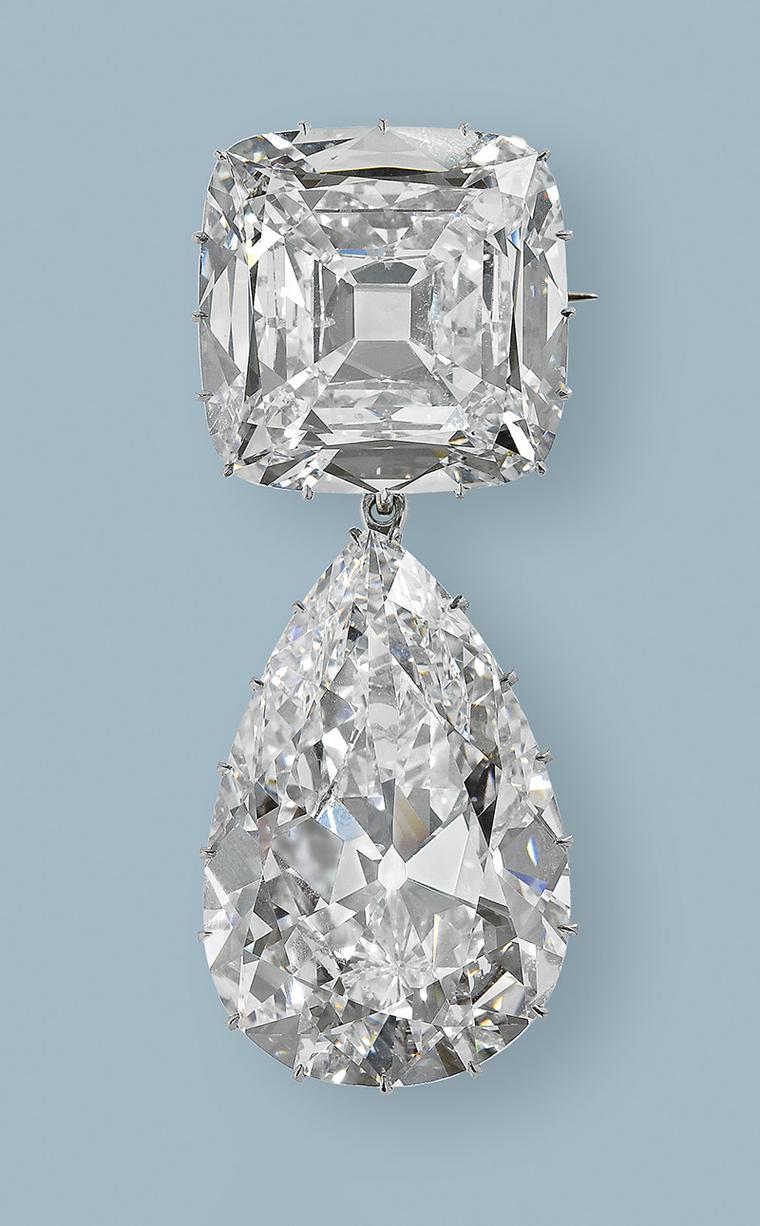 Cullinan diamonds together for Queens jewellery show at Buckingham Palace