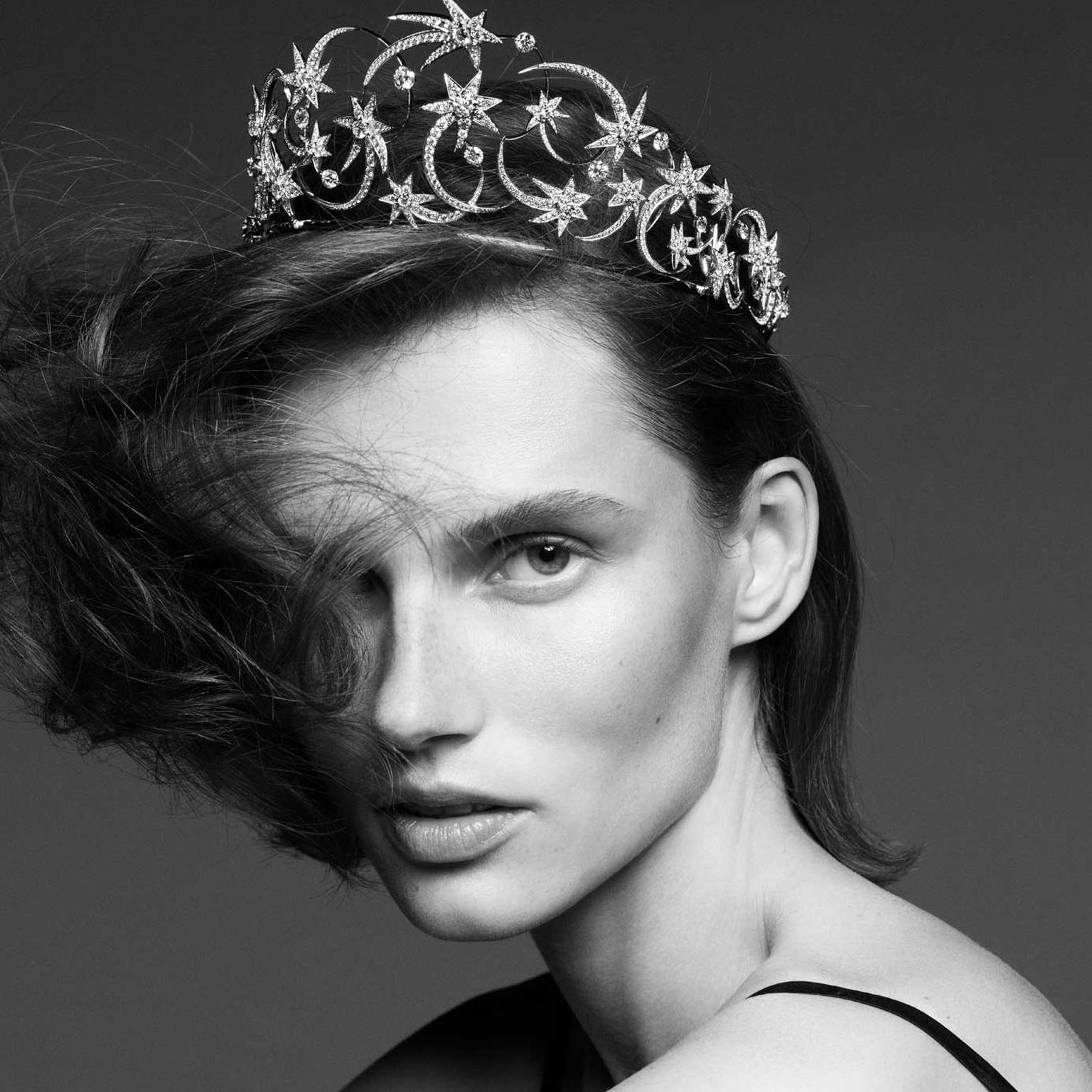 The Parisian maison Chaumet is a master at telling poetic stories through jewels, a tradition that dates back more than 200 years and which it continues in magnificent style with the new 88-piece Les Ciels de Chaumet collection launched during Couture Week in Paris this July.

For this year’s high jewellery collection, Chaumet turns its attention heavenwards and looks to the sky for inspiration, a theme that has been a constant in the history of art and continues to captivate creative minds. A story of four parts, it explores the creatures that inhabit the sky and the elemental forces that shape our planet before propelling us out of the atmosphere and into the universe.

In the chapter entitled Les Fulgurances du Ciel, celestial bodies are captured in astral compositions, illuminated by showers of diamonds. The other worldliness of the galaxy is captured in the painterly patterns that swim beneath the surface of the mysterious black opal Passages ring (below), while the spectacular Passages necklace fashions comets out of opals, Paraiba tourmalines and multi-coloured tourmalines that trail around the neckline and streak down the décolletage.

A classic motif in jewellery design since the late 19th century, stars have been woven into the history of Chaumet for more than 150 years. Sketches of aigrettes – the spray of gemstones decorating a tiara – from the Chaumet archive are referenced in the Étoiles Étoiles parure (top), which has been crafted with the most delicate of touches. The barely there platinum mount, made possible by the lightest of knife-edge settings – a speciality of Chaumet’s artisan-jewellers – brings an ethereal beauty to this most traditional of jewels as stars twinkle overhead, leaving trails of diamonds in their wake.

The fiery sun and its myriad shades of yellow, orange, pink and purple as day turns to night are celebrated in Les Couleurs du Ciel, the most vividly realised of the chapters. The Soleil Glorieux tiara (below) is a radiant tribute to our scorching celestial neighbour, with a yellow diamond sun at its heart encircled by gleaming halos of diamonds, beneath which smooth bubbles of cabochon rock crystal are set into voluminous cloud-like formations.

In the Soleil de Minuit jewels (below), which capture that moment when the sun starts to dip below the horizon, painting an ever-changing palette of oranges, pinks, purples and blues across the dusky sky, the extraordinary artistry that binds this collection together really shines. With yellow sapphires and blue and pink spinels so vivid they appear almost luminous, set within three-dimensional plumes of diamonds, Chaumet perfectly expresses one of nature’s greatest spectacles.

Stylistically, the final two chapters are worlds apart – one represents the forces of nature that bring with them thunder and lightning or drifting clouds, the other extends the maison’s naturalistic design vocabulary with jewelled swallows and elegant cranes. The genius of this collection is that the jewels might be wildly different – an abstract necklace evoking the turbulence of a precious storm that is transformable; swallows swooping downwards from the lobes (below), with marquise tsavorite bodies and pear shape diamonds suspended from their wings – but they still feel very much part of the same universe. Displaying an extraordinary breadth of vision, Les Ciels de Chaumet is absolute perfection from start to finish. 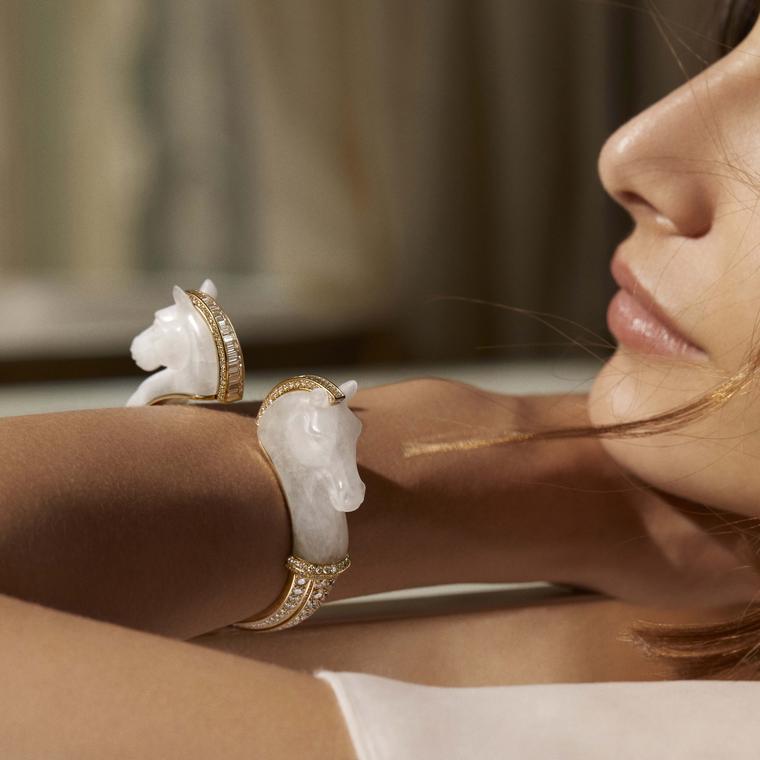 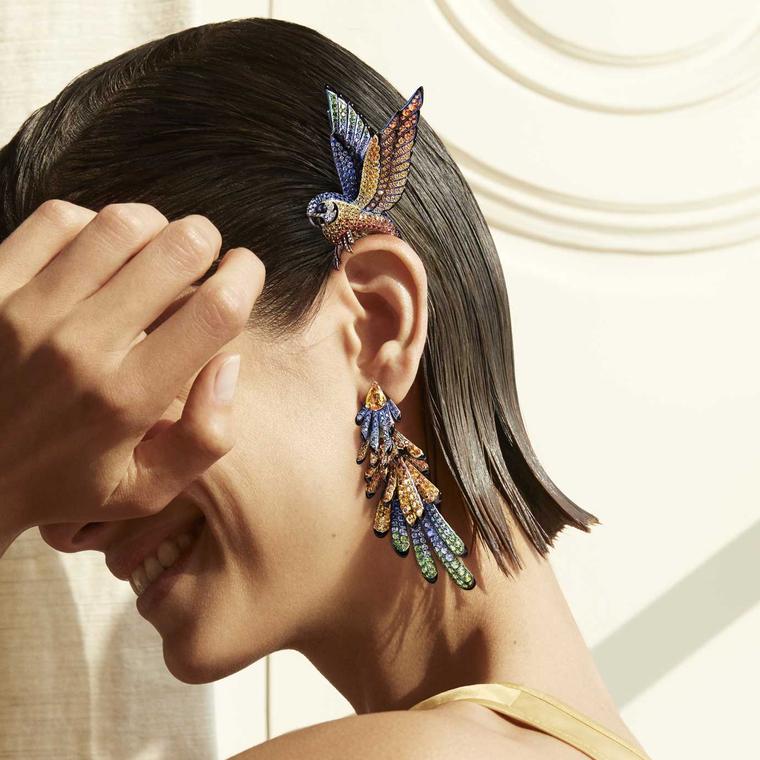