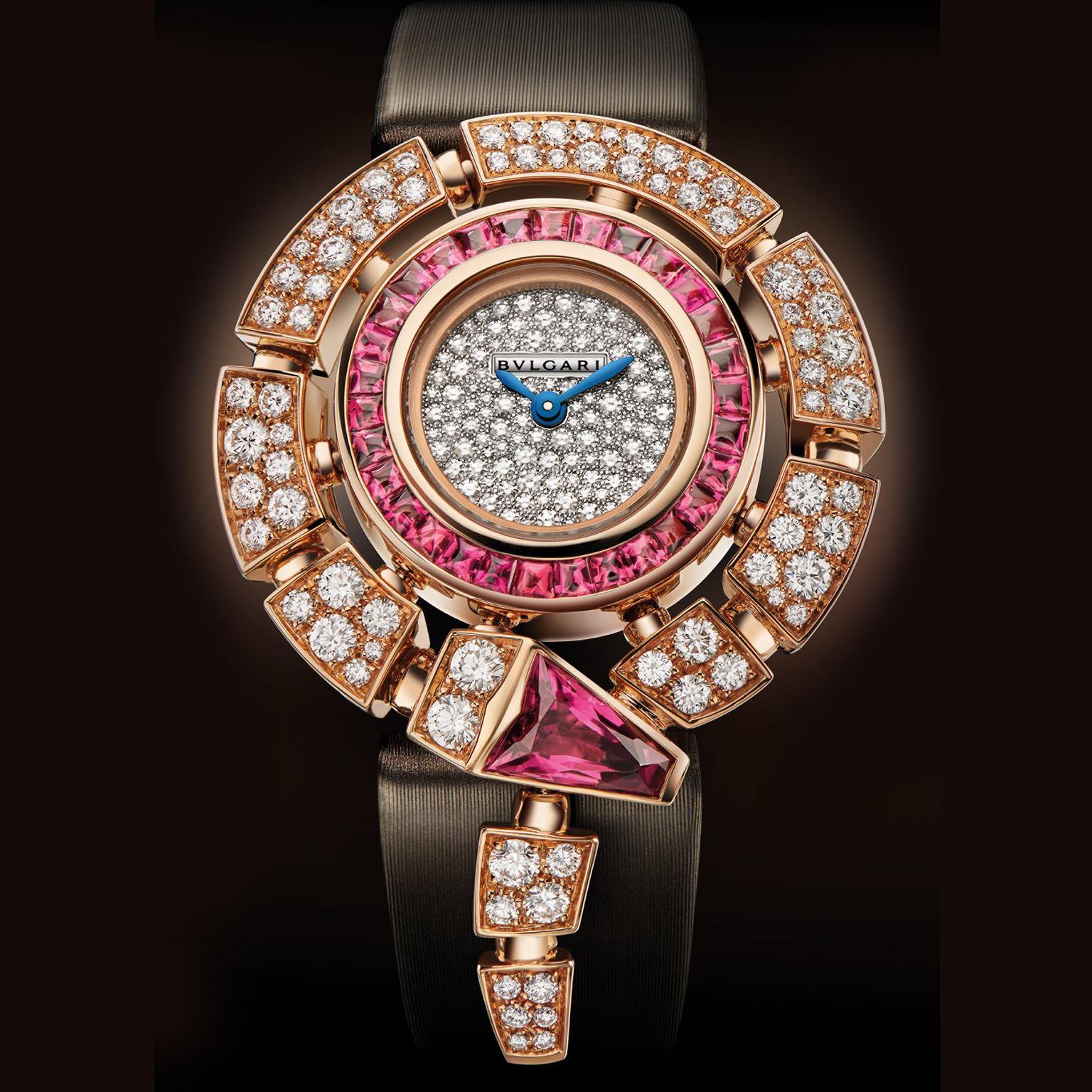 Bulgari will be unveiling a seductive new collection of snake watches for women at Baselworld 2016. Redesigned from head to tail, the new Serpenti Incantati watches feature Bulgari’s iconic mascot coiled around the bezel, resplendent in a high jewellery mantle of gemstones.

Since the dawn of time, snakes have exerted a powerful attraction on the female psyche. From Eve to Elizabeth Taylor, they have entranced women with their graceful silhouette and tempting hint of danger.

While filming Cleopatra in Rome in 1962, Liz Taylor was photographed wearing a fabulous Bulgari Serpenti watch coiling up her imperial arm. According to Richard Burton - her Mark Anthony on set and lover in real life - “the only word Elizabeth knows in Italian is Bulgari." Elizabeth Taylor’s enduring love affair with Bulgari, which lasted longer than most of her marriages, is understandable. The jeweller par excellence of Italy’s dolce vita, Bulgari’s sensual interpretation of form and uninhibited use of colour appealed to the exuberant screen sirens of the day.

For 2016, this famous serpent sheds its skin and metamorphoses into the new Serpenti Incantati collection of Bulgari watches. Its sinuous forms have been entirely revisited to create a new genus of reptile, with a contemporary character underlined by the stylistic audacity that has always characterised the Italian house. In a departure from her famous and more naturalistic Serpenti sisters of the past, which used the body of the snake to coil around the wrist, these watches for women use the geometric body of the snake to form the round shape of the watch case.

In order to get the snake’s contours to contort and coil, a total makeover was required. Designer Fabrizio Buonamassa Stigliani’s preliminary sketches reveal the genesis of these new Bulgari watches and their historic source of inspiration. “They are soft and stylised,” says Buonamassa about the lines of the collection. “While Bulgari domesticates the snake, the latter nonetheless appears to be in perpetual motion. Therein lies the secret of this watch.”

The striking geometry of the snake, which in no way curtails its sensual movements, was inspired by a vintage brooch of the 1930s made in Bulgari’s ateliers, which was perfectly in tune with the Art Deco style of the day. The period of the brooch coincides with the incorporation of Costantino and Giorgio Bulgari into the family business in 1932. As heirs to Sotirio Bulgari’s silverware emporium, the brothers were responsible for introducing high jewellery collections into the mix and transforming the Via dei Condotti shop into a veritable luxury emporium.

Venturing into the world of high jewellery at the apogee of the Art Deco period, the brothers were swayed by the aesthetic climate of the day. The sensational discovery of Tutankhamun’s treasure in 1922, which prompted a revival of all things Egyptian, was echoed in Bulgari jewellery with colourful enamel pieces and stylised, naturalistic decorative elements of snakes and lotus leaves. Three years later, in 1925, the Exposition Internationale des Art Décoratifs et Industriels Modernes in Paris would signal the birth of the Art Deco style, as its sleek geometric shapes associated with the industrial age made their impression in jewellery.

The original brooch from Bulgari’s archives depicts a coiled snake’s body crowned with a dramatic pear-cut diamond. Looking at Buonamassa’s sketches for the Serpenti Incantati watch collection, you can see how the original brooch influenced the new design, with its mobile “scales” and the decision to expose the “nuts and bolts” of the structure - very much in the spirit of industrial design. Judging from the sketches, Buonamassa has carved indentations into the side of each gold scale to lighten the weight, just the way Rome’s classical architects used coffering at the Pantheon to lighten the weight of the colossal dome.

Coiled around the dial of the new Serpenti Incantati, the articulated scales of the snake are set with different-sized diamonds to interrupt the rigid geometry - a design tenet that is carried on to the graded scales of the bracelet. The head of the snake - placed slightly to the left of 6 o’clock - bites its own tail to create a circle of eternal beauty.

All the 2016 high jewellery models are presented in demure 30mm white or pink gold cases. By playing with different cuts and sizes of gemstones, the snake transmits a wonderful sensation of volume and motion. The stunning rubellite and diamond version, for example, features brilliant-cut diamonds in the snake’s body, crowned with a vibrant pink rubellite head. The bezel of this model is set with baguette-cut rubellites, while the dial sparkles with snow-set diamonds.

When designers in the late 1940s had the idea of transforming the fashionable snake bracelets into a secret watch, Bulgari’s watchmaking adventure was about to begin. Following the success of the Bulgari Bulgari watch of 1977, Bulgari cemented its future in horology and, in 1980, founded Bulgari Time - a consortium of various production sites in the watchmaking heart of Switzerland. A vertically integrated phenomenon, Bulgari’s different watchmaking sites are today responsible for the manufacture of ultra-complex timepieces. Ranging from chiming watches, tourbillions and perpetual calendars to Grandes Complications, Bulgari is a key player in the haute horlogerie arena. In 2015, Bulgari Time issued the world’s thinnest tourbillon movement, measuring just 1.95mm in height, inside the handsome case of the Octo Finissimo Tourbillon.

Marrying seductive Italian design to Swiss watchmaking mastery has resulted in some truly spectacular offspring, including the new 41mm Serpenti Incantati Tourbillon Lumière Skeleton watch, which bridges the realms of haute joaillerie and haute horlogerie with seamless style. The new Tourbillon marks the first time a Serpenti watch has been fitted with a complication. The beautifully hand-finished skeletonised movement lets you peer into the heart and soul of the watch, exposed on both sides of the sapphire crystal case. Like her sisters, the articulated scales of the snake coiled around the dial are set with dazzling brilliant-cut diamonds. Available in pink gold with pink rubellite details, or white gold with white diamonds, these watches for women are limited editions of 30 pieces. However, the protagonist here is the tourbillon. Performing a rotation every 60 seconds, the tourbillon is a visible reminder of the life force animating this creation and conspires to create a creature of infinite fascination.

Nicola Bulgari, grandson of Bulgari’s founder Sotirio, neatly sums up the philosophy of the brand constantly shedding its skin to advance: “You cannot simply live on past glories; that’s foolish. To be a success, you have to combine the past, present and future.” And the chameleonic snake motif that has transcended all epochs of civilisation is proving that its bite is as seductive as ever. 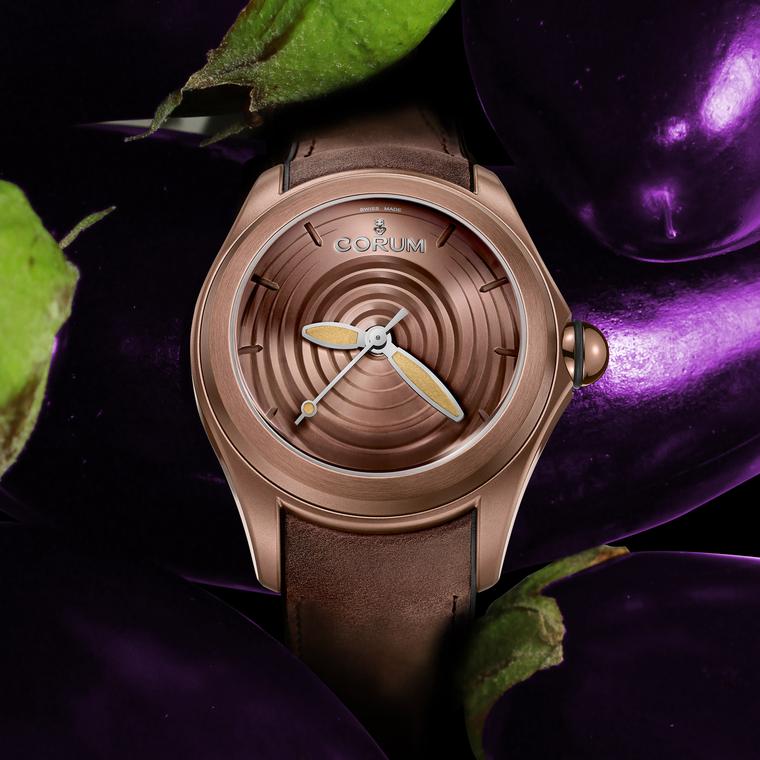