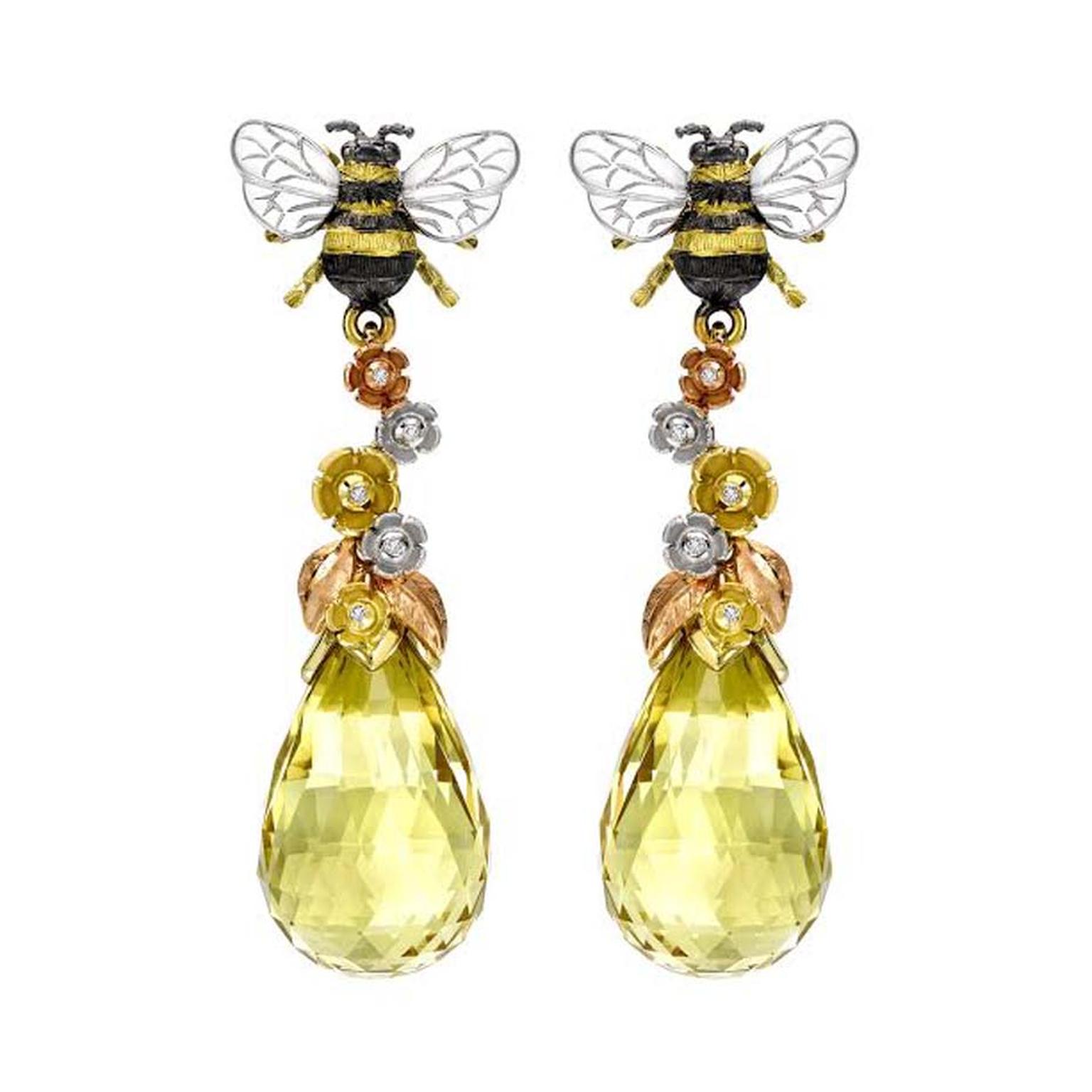 The world of fine jewellery is positively swarming with bee and honeycomb motifs this spring. Whether clambering over a ring or swaying gently from a necklace, the bee has buzzed its way into a myriad of unique jewellery collections.

Insect-inspired jewellery has been popular since the Victorian era and, along with other flying bugs, the bee featured prominently in the ornate pieces designed by Art Nouveau jewellers. The hexagonal honeycomb pattern also lends itself very well to contemporary jewellery design, offering a playful yet sophisticated take on the geometric trend.

The bee takes centre stage in H.Stern's new Rock Season collection, which combines Victorian influences with punk rock style. It's an unlikely pairing but the resulting pieces are nothing short of stunning, with the buzzing insect seamlessly incorporated into unique jewellery that reflects a summery glow through yellow gold and cognac diamonds.

The bee has become iconic in Chaumet jewellery since the motif was first featured in pieces made by the Parisian maison for Napoleon Bonaparte. The coloured gemstones in Chaumet's Bee My Love collection steer away from traditional black and yellow, and instead portray the buzzing creatures in vibrantly coloured pear-cut and round-cut stones, interspersed with white brilliant-cut diamonds.

We may swat them away when they hover too close in the garden but thankfully the gilded wasps in Tessa Packard's fine jewellery collection will only put a sting in your style. The magnificent Cocktail Sting ring in yellow gold and black sapphires would be an imposing piece, even if it wasn't for the solid gold wasp perched menacingly on top. The more delicate Swarm necklace features both wasp and honeycomb motifs and is available in yellow, white or rose gold. Both jewels are part of Tessa's Predator/Prey collection, which the designer describes as "a collection exploring the 'conscious' nature of jewellery - that being how an inanimate form, in this case the wasp, is given life and meaning through the physical relationship it has with the wearer."

This unique jewellery collection is inspired by the conceptual artists of the mid 20th century who believed that they were merely the creators of a piece of work and that it was the gallery or audience who completed it. Tessa says: "Predator/Prey plays on the idea of the animate versus inanimate, and who is beholden to who."

The bee is also one of Theo Fennell's favourite inspirations and appears regularly in the London-based designer's jewellery collections. Coloured gemstones are suspended from intricately detailed ear studs, while golden bees swarm around the neck in an orderly fashion on the diamond and sapphire necklace.

Delfina Delettrez' current collection includes several pieces of bee jewellery, including her trademark single earring with a bee crafted from black diamonds and yellow sapphire, balanced by a single pearl at the other end. The designer, who recently opened a new store in Mayfair's Mount Street, has also incorporated the honeycomb pattern into a ring, with a bee clambering up the side.

Meanwhile, Dior Joaillerie has captured the symbiotic relationship between bees and flowers in an amethyst ring and earrings inspired by Monsieur Dior's favourite flower, the fragrant rose.

With the spring bulbs finally rearing their heads, these buzz-worthy jewels are the perfect pieces to usher in the new season.

PREVIOUS ARTICLE Pink sapphire engagement rings: the way to win her heart NEXT ARTICLE William & Son harnesses the beauty of pink sapphires in new Beneath the Rose collection 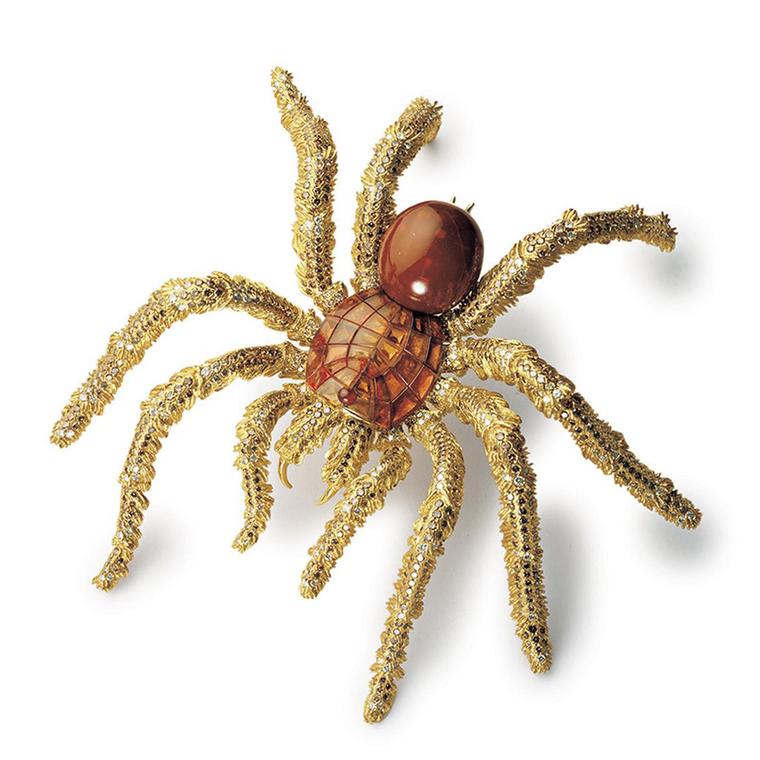 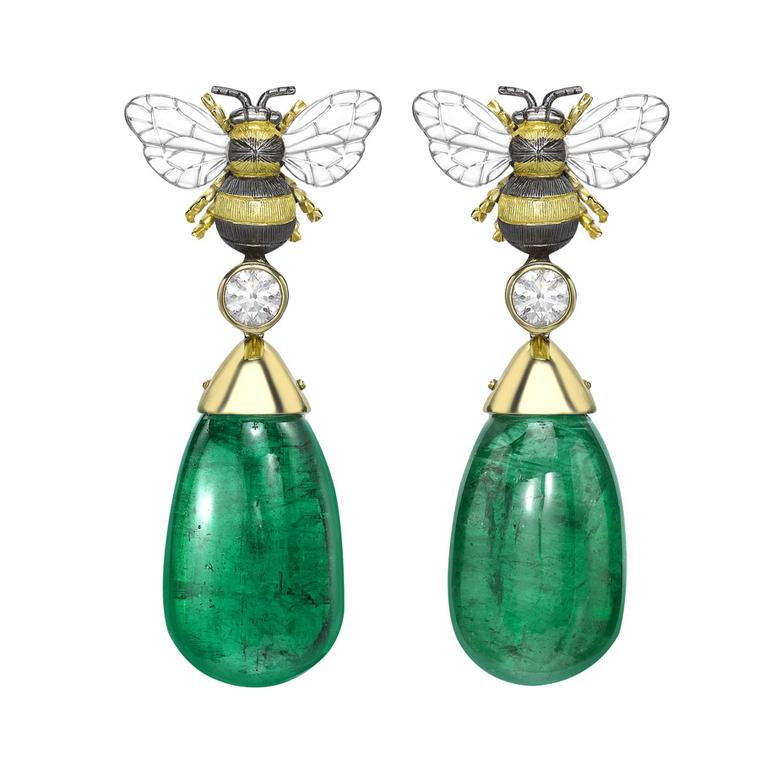