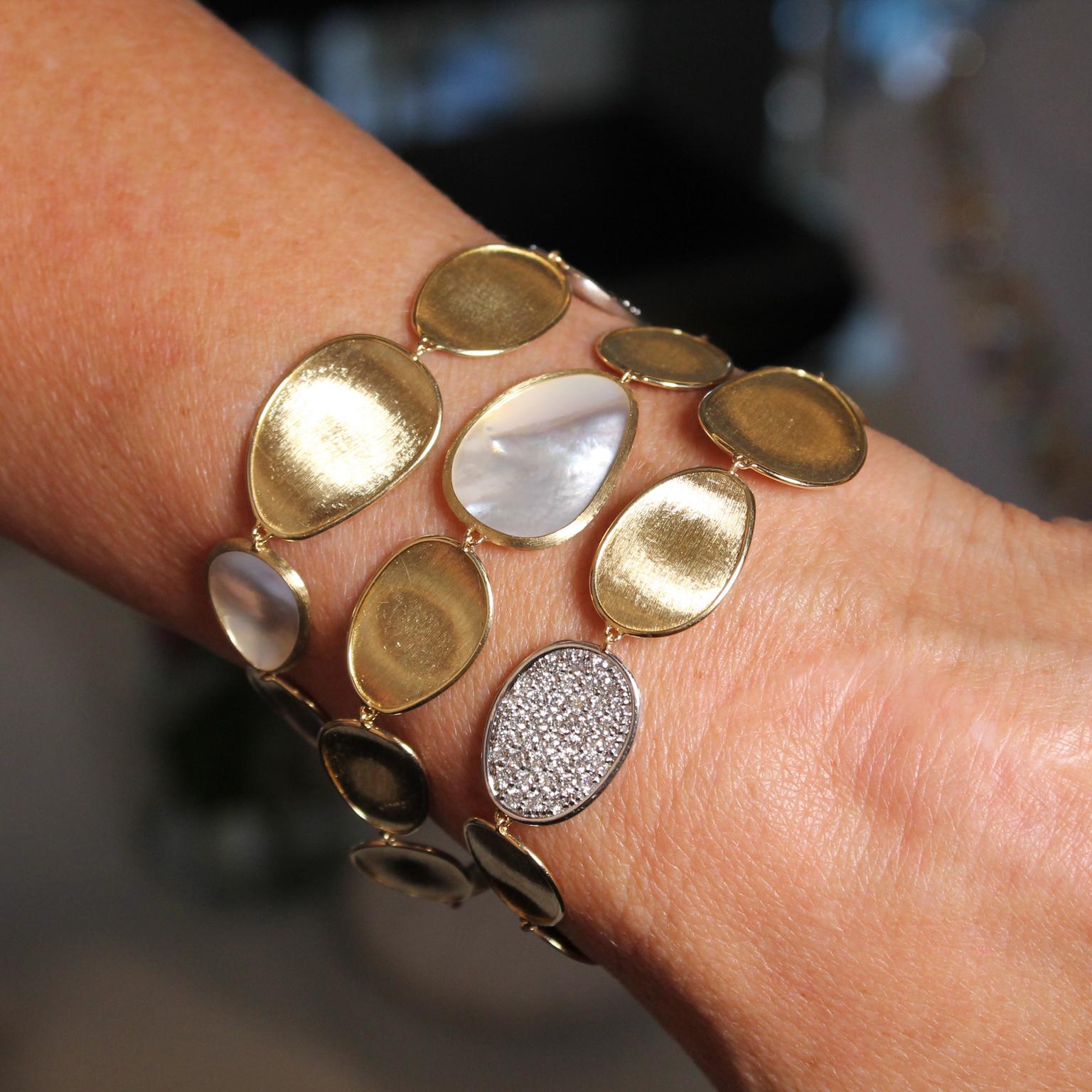 Have you noticed the flurry of recent designs that are tapping in to the beauty of mother-of-pearl? It started with the launch of Melanie Georgacopoulos’ MOP Shell collection at the end of last year and has quickly spread, with everyone from Marco Bicego to Dior using this unique material to add a shimmering new dimension to their jewels.

Mother-of-pearl is the shiny substance that dazzles you when you prize open an oyster shell. Secreted by some molluscs to line the inside of their shells, it is characterised by the play of rainbow colours on its surface. There is no comparable material in nature, except for pearls, which are coated in nacre, the same substance that gives mother-of-pearl its iridescence.

Relatively strong and hard-wearing, mother-of-pearl has been used for thousands of years in everything from jewellery design to architecture. Mother-of-pearl buttons were popular in the 13th and 14th centuries, a tradition that continues to this day with London’s Pearly Kings and Queens, who wear them on their suits and dresses, many of which have been handed down from generation to generation. From knife handles to watch faces, furniture to jewellery boxes, like Linley’s beautiful Yellow Diamond design, below, mother-of-pearl is used decoratively in hundreds of different ways.

Just like pearls, mother-of-pearl comes in many colours, from white all the way through to black, with dazzling blue-greens, pretty pinks and gleaming golds in-between. But naming the colours doesn’t come close to describing the appearance of mother-of-pearl and its multiple hues, which swim on the surface, creating a rainbow effect that glistens like fish scales in the sun.

Until recently, London-based jeweller Melanie Georgacopoulos worked exclusively with pearls, but at the end of 2016 she launched the MOP Shell collection, which is designed to explore the potential of mother-of-pearl. “It has been used in jewellery for a long time,” she says, “but I feel it has never reached the status of pearls and has been linked too many times with cheaper products. Right now, there is a lot of room for innovative designs and products that showcase the beauty and richness of colour found in mother-of-pearl.”

Soon to become a mother for the second time, Georgacopoulos also found herself becoming more interested in the protection of the world around us, as well as the waste we create. “It a was natural step to look at the environment of the pearl, its host, the oyster, and how the mother-of-pearl could also be used,” she explains. “I feel that, as a material, mother-of-pearl is highly unexplored in terms of its potential in the jewellery industry. It comes in a variety of beautiful colours and I am happy to be building entire collections around it.”

Extracting mother-of-pearl from a shell is a complex process as it is prone to chipping and cracking. It took Italian jeweller Marco Bicego more than a year to develop a technique for cutting and polishing it without damaging it, but mastering the art has enabled him to give the bestselling Lunaria collection a pretty makeover. Dainty slivers of grey and white mother-of-pearl shine out from necklaces, earrings, bracelets and rings.

Georgacopoulos faced similar challenges when creating her MOP Shell collection. “Because it is quite fragile to work with and limited in supply in terms of size and thickness, you have to design with those restrictions in mind. At the same time, it is light and can be found in flat sheets/tiles, which opens it up to interesting possibilities quite different to those of a pearl.”

This season at Dior, discs of mother-of-pearl bring an unexpected femininity to the Rose des Vents collection, while Louis Vuitton has shaped pink mother-of-pearl into delicate flowers in its petite new Color Blossom BB jewels.

It is impossible to capture the play of colours in a picture, so to fully appreciate the beauty of mother-of-pearl, watch our video of Marco Bicego’s Lunaria jewels in motion: 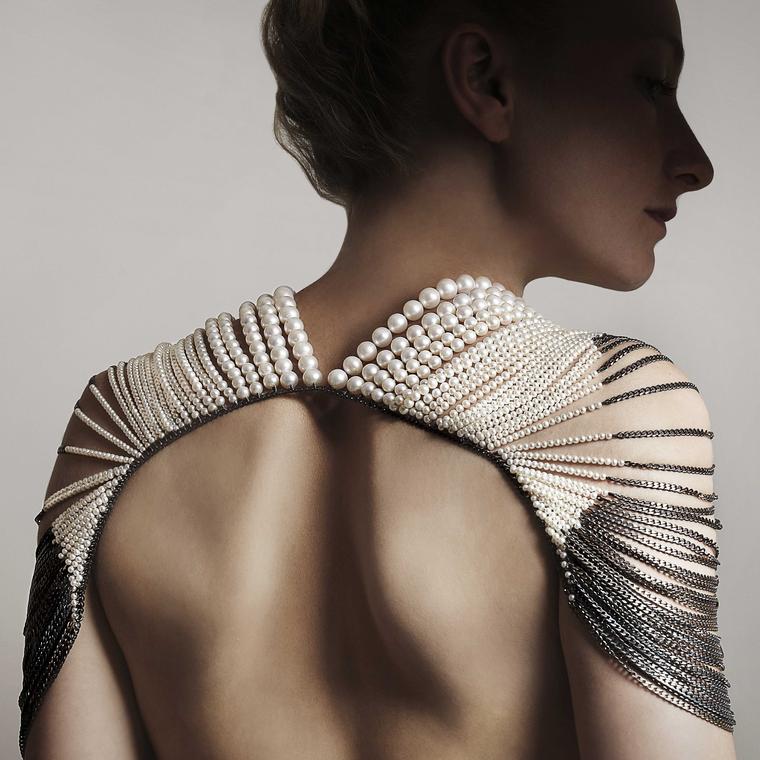 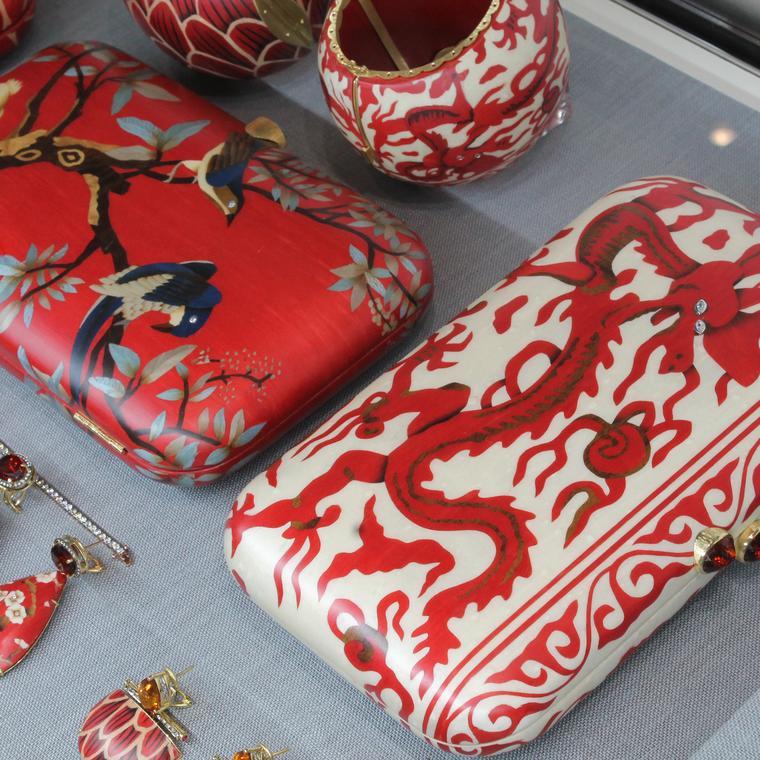