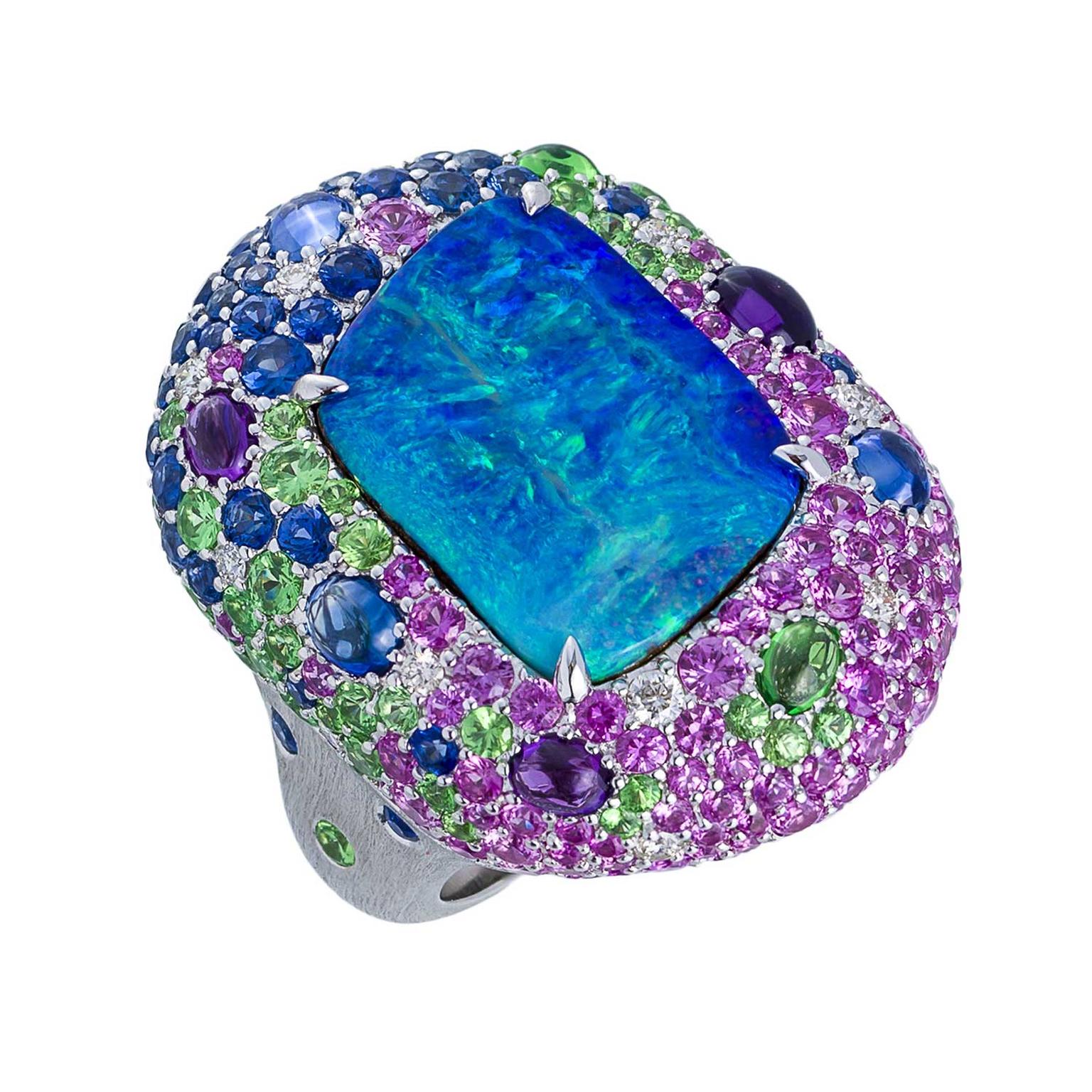 Statement jewels like no other, it seems fitting that cocktail rings started out as a sign of rebellion against the Prohibition that swept across America almost a century ago.

The 1920s were a period filled with tension between traditional values rooted in pre-war nostalgia and the dramatic social and political changes taking place. Frequently referred to as the ‘Roaring 20s’ or the ‘Jazz Age’, this was the decade when women not only gained the right to vote but also increasingly worked outside the home. Clothing also changed as women abandoned restrictive corsets and long dresses in favour of shorter hemlines and trousers. The term ‘flapper’ was coined to describe a new breed of young women, both in the United States and Europe, who cut their hair into a bob, wore make-up, smoked, drank and danced with abandon to the latest jazz music.

Alcohol was banned, but this didn’t stop partygoers from seeking out hidden speakeasies, often run by gangsters, where entry could only be gained via a secret code word. Flamboyant flappers on the underground cocktail scene would don oversized rings to draw attention to the fact that they were sipping illicit alcoholic beverages. In fact, the cocktail culture that endured long after the 1920s was spurred on by the Prohibition as the contraband alcohol tasted so bad that it had to be mixed with other ingredients to make it drinkable.

In this new era of burgeoning freedom, a bold cocktail ring was also a way for women to flaunt their independence. Usually worn on the right hand, the ring was blatantly not a wedding band and had most likely been bought with a woman's own money. This is a sentiment that lives on even in today’s less restrictive society. Alexandra Ushamirskaya, director of Jewellery Theatre, recalls: “I once had a client who never bought anything apart from cocktail rings. When I asked her why this was the case, she smiled and said: ‘Because I can see them! I wear earrings and necklaces for other people, but cocktail rings are mine to enjoy!’”

Read more about the significance of right hand rings here.

In the 1950s and 60s, the cocktail ring became the standard dress-up accessory for women heading to - you guessed it - a cocktail party, restaurant or night at the opera. It briefly went out of fashion in the 1960s and 70s only to return even bigger and bolder in the power-dressing 80s, when women wore oversized rings during the day and night.

The cocktail ring is now a firm fixture in most jewellery brands’ collections and just this spring British Vogue implored its readers to “wear one on every finger”.  That may be too much for anyone but the most colourful extrovert, so play it safe, but not boring, with one bold ring and keep the rest of your jewellery more minimal.

With a high setting designed to give extra sparkle and brilliance, traditionally cocktail rings would be set with faceted stones, although cabochon gems and pearls are also commonplace these days. The options are virtually endless so choose a design that suits your personal style, whether it’s Greek jeweller Michael Pelamidis’ contemporary open band design, Andrew Geoghegan’s multi-stone Chocolate Box ring or the decadent Cupcake ring by Los Angeles-based Erica Courtney. Also recommended is Azza Fahmy's recently launched nine-piece collection of limited-edition cocktail rings, set with an array of coloured gemstones such as amethysts, quartz, opals, rubies, tanzanite and topaz.

A must-have accessory for every woman, if you happen to be wearing one of these bold rings when drinking a cocktail, make sure to raise a glass to the 1920s flappers who gave us this glamorous jewellery box staple.

PREVIOUS ARTICLE Yael Sonia: a Brazilian in New York NEXT ARTICLE The beauty of nature revisited by Chaumet 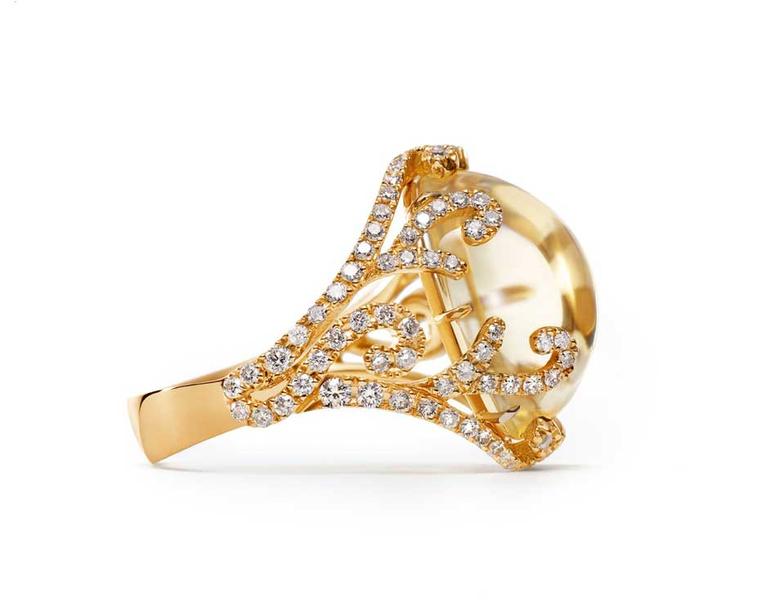 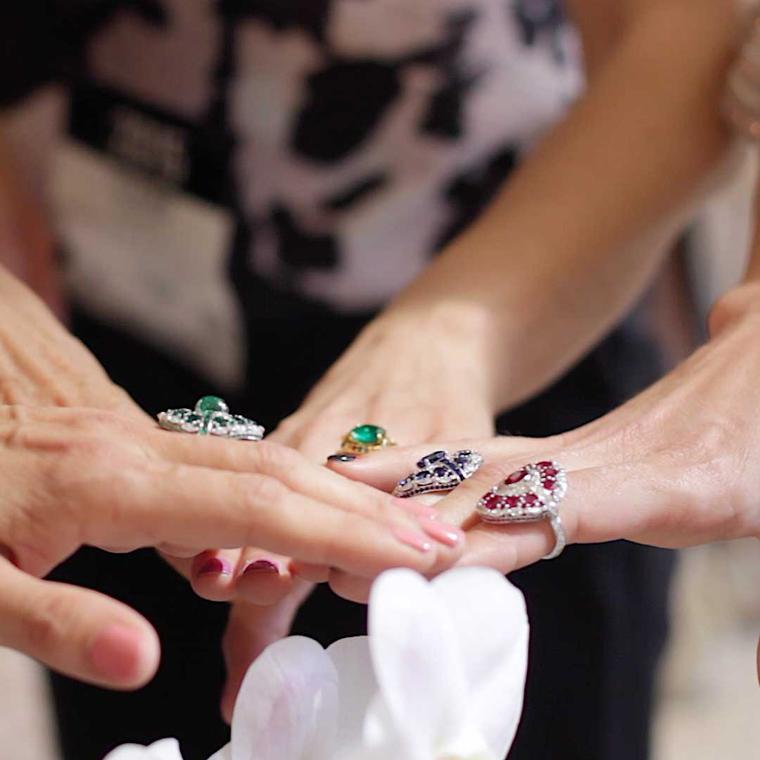