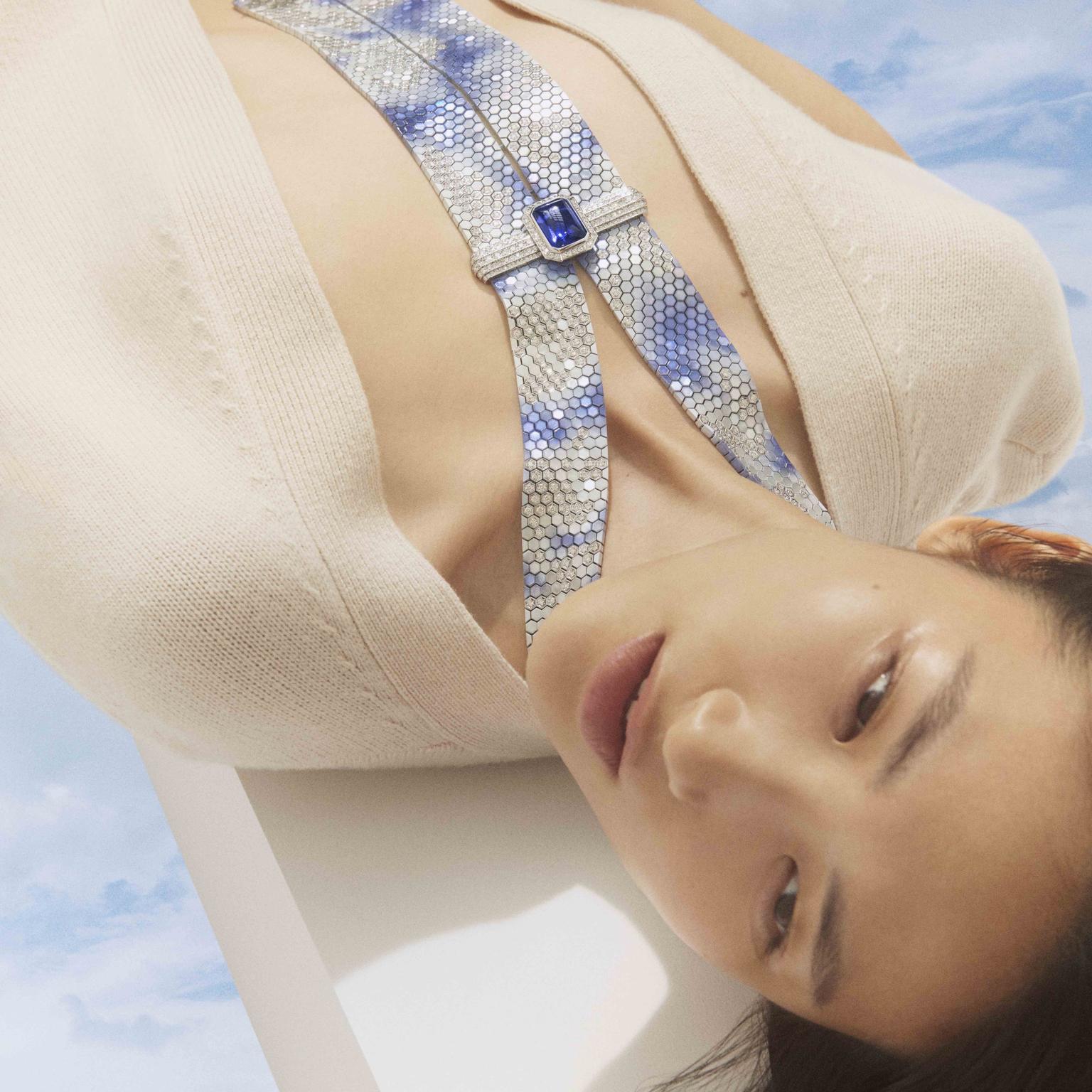 Elegantly but firmly breaking the rules, Boucheron's Creative Director Claire Choisne throws wide open the window and gazes up into the sky. The result is a heavenly white and blue collection of jewels of ethereal lightness and dazzling innovation.  As dreamlike as catching a breeze, Contemplation achieves the near impossible in crystallising the intangible.

Ms Choisne explains: “(Contemplation is a) theme really dear to my heart. The creative concept behind it was to highlight the incredible beauty of simple moments such as the passing of a cloud, the caress of a feather or the swirling of birds...Take time to contemplate and I hope it will bring you a peaceful moment.”

Discover the history of Boucheron and its iconic designs here.

The Zen mood of the collection is a world away from the awe-inspiring opulence and magnificence of the statement jewels that normally populate the temple of high jewellery. And as gently as a summer rain, it transforms our expectations of the most precious of jewels with its sheer brilliance and breath-taking beauty.

Quite simply, Contemplation is the most relevant high jewellery collection to land in Place Vendôme yet despite the innovation and daring, it is Boucheron through and through. Here you see a Serpent Bohème shape, there a re-interpretation of the house mesh necklace or catch a glimpse of the perennial feather, bird or arrow motifs. It is very much in the style we have come to know Ms Choisne for with an abundance of matt rock crystal and diamond pavé.

What may be a small step for mankind is massive step forward for high jewellery. Case in point is the Goutte de Ciel or Sky Drop suite (below) where Ms Choisne has dared to make a central ‘stone’ of Aerogel encased in rock crystal. This futuristic choice of material pushes the boundaries to the point of questioning what really is a valuable matter worthy of the term ‘high’ jewellery.

Ms Choisne chose Aerogel, a ‘mystery matter … used in space by NASA to gather stardust’ as it: ‘could reproduce not only the sky’s infinite palette of blues, but also its fleeting, near-impalpable essence’. Looking beyond Boucheron’s airy description I turn for help to NASA’s website. The Space Agency offers this more prosaic description of Aerogel: ‘Picture preparing a bowl full of a sweet, gelatin dessert…If that wiggly gel were placed in an oven and all of the moisture dried out of it, all that would be left would be a pile of powder. But imagine if the dried gelatin maintained its shape.... The structure of the gel would remain, but it would be extremely light due to low density. This is precisely how aerogels are made.’ By using Aerogel, NASA’s insulating material of choice, Boucheron goes where no jeweller has gone before and the effect is similar to an impossibly clear, very large water opal.

In the mood of capturing a fleeting moment, En Passant recreate puffy clouds drifting in the sky using diamonds, rock crystal and pearls . Genius details such as the earrings (below) that sit on the front and drift out from the back of the lobe create a sense of motion and lightness.

Fenêtre Sur Ciel, or Window to the Sky is a homage to James Turrell's Open Sky work of art in Naoshima, Japan and conjures up a stormy sky.  As flexible as fabric, the titanium mesh of the necklace (main image) supports hexagonal tiles of mother of pearl airbrushed with slate coloured lacquer interspersed with a dusting of diamonds. A plump tanzanite sugarloaf sits like a rain cloud at the centre of a clip that cinches this necklace as it drapes down the length of the torso.

The Nuage in Apesanteur necklace (above) is a marvel of design and technology. It took two years to create a cloud of over 4,000 diamonds and glass beads on 10,000 titanium threads mapped out by an algorithm to hover around the neck. In Avant le Frisson, the quivering frailty of a dandelion is wittily expressed in diamonds set on mobile titanium wire. A cloud of diamonds and Wind rippling through grass is captured in the dainty Au Gré du Vent set that includes both a spectacular tiara and a question mark shape necklace, a house icon since it was first created by Frédéric Boucheron in 1879.  Perles de Plume (below) also offers a question mark necklace in a heart-achingly delicate interpretation of a snow-dusted peacock’s feather set with diamonds and more than one hundred carats of Akoya pearls.

A 1906 diadem finds new life in the Battement D’Ailes jewels that capture light gliding over feathers. Mother of pearl is engraved to mimic the quills and paired with the shimmer of diamonds set into white gold in a choker, asymmetrical earrings and hand-spanning rings.  The feather theme is further explored in Caresse de Plume and Plume du Jour using the same mix of materials.

The laser engraved rock crystal Murmuration choker worthy of a galactic princess conveys the soft movement of a flock of birds. From the same series, a spectacular ear cuff (above) surrounds the ear in a swirling cloud of charming, diamond-set birds. A more figurative plump little swallow brooch (above) is inspired by a design from 1895. The famous arrow motif that has been used by Boucheron since 1873 travels through time and grows daringly in size to pierce the lobe (below) and cover the entire length of the ear, wrap around the neck and encircle the wrist.

As the light fade, the Murmure d’Étoiles (below) turns to the night sky and a bold, light-spangled aventurine cuff in true Boucheron style is topped with a 150.51 carat tanzanite cabochon.

Delighting in often over looked moments and sensations, it is the most personal offering yet to come from Ms Choisne’s studio and one that speaks straight to the soul. 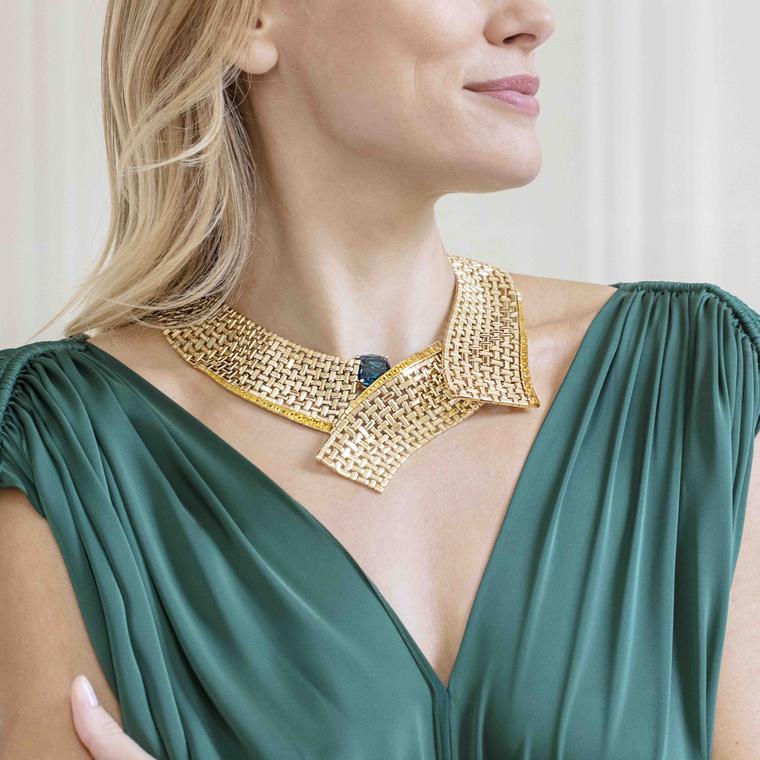 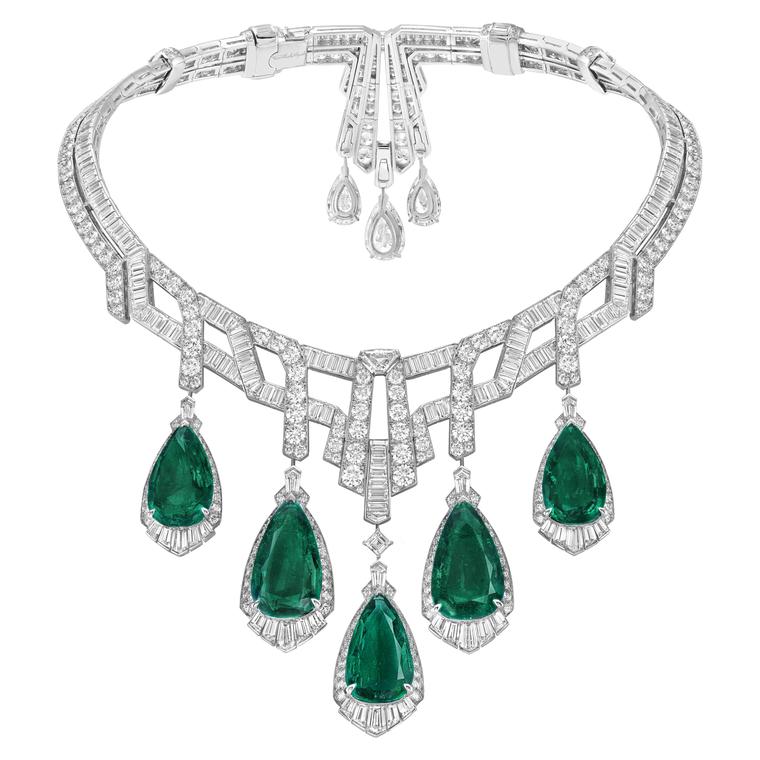 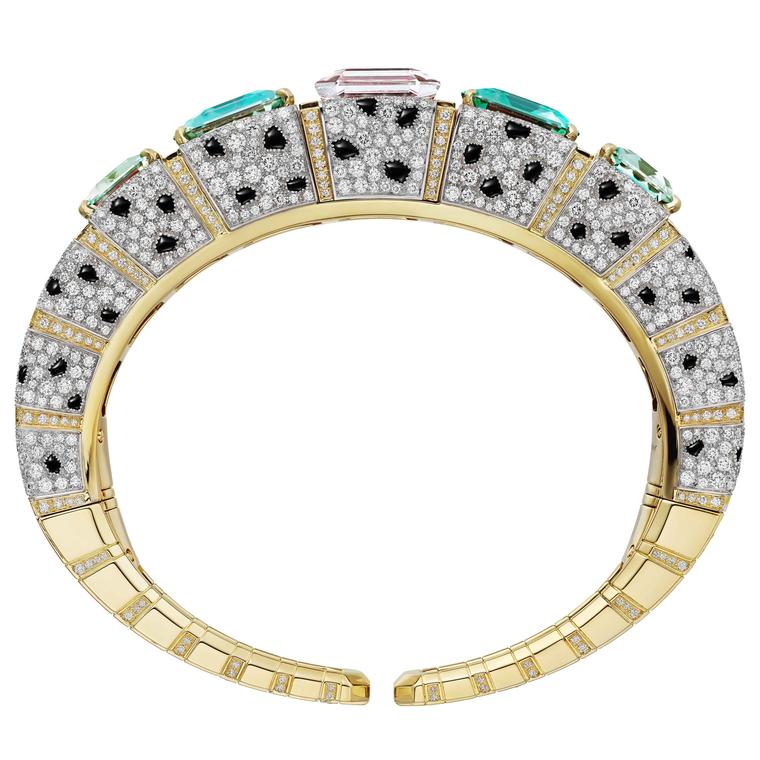