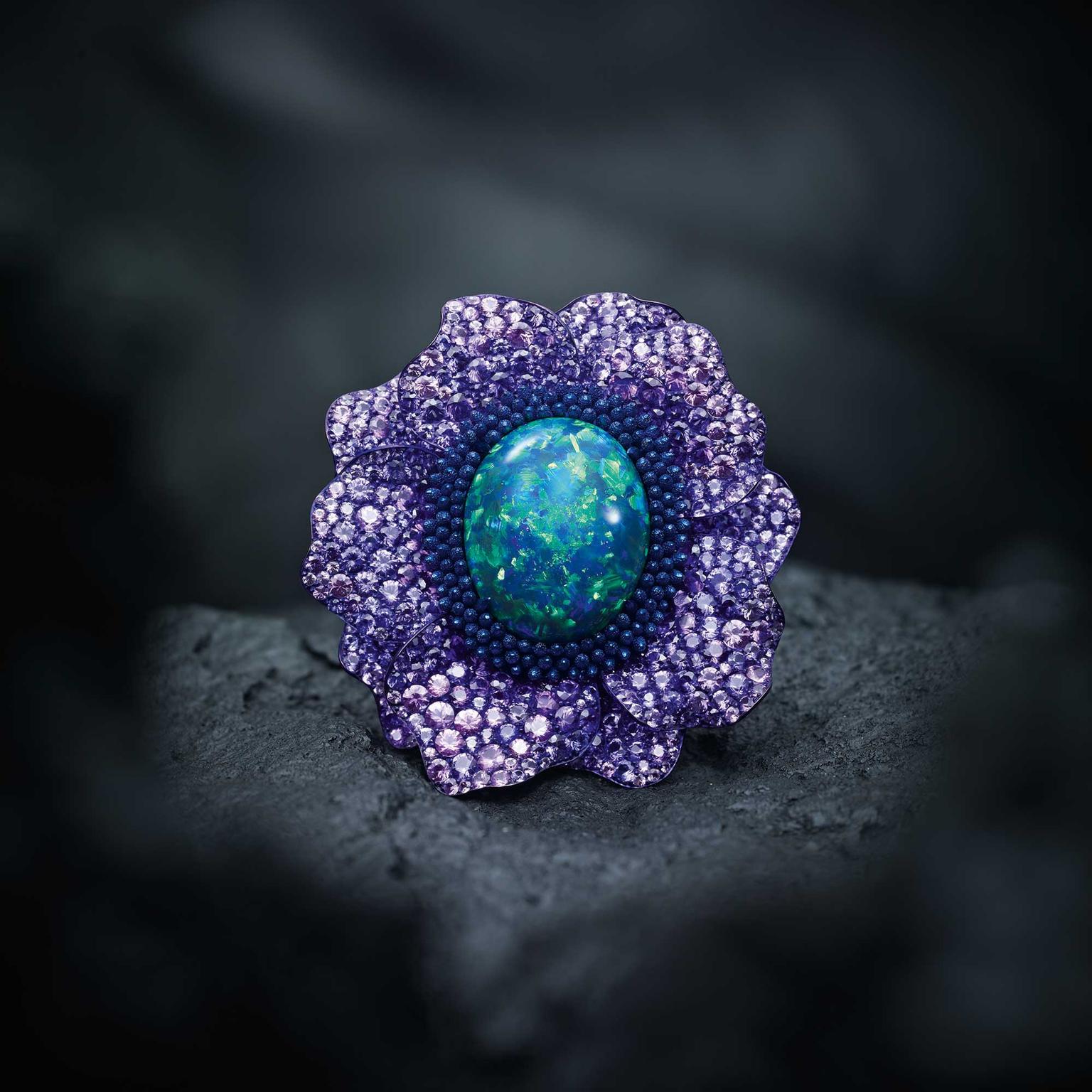 When I look back at all the jewels we've featured on The Jewellery Editor in 2015, there is a colour palette that has come to define the year: blues and greens. It's no coincidence that every single jewel that has made my best-of list is one or the other of these colours. It's a trend we spotted at the biggest watch and jewellery fair of the year, Baselworld, and one that has made itself felt on Instagram, where virtually every single one of our most-liked posts starred a blue or green jewel. Read more about Baselworld blue gemstones here.

Chopard's Fleurs d'Opales ring is the epitome of high jewellery: a rare and exquisite 24 carat black opal swimming with flecks of blue and green, set into a beautifully realised titanium-petalled floral design. And bringing the year to a close with a bang was Cartier and the extraordinary 189.34 carat opal that forms the centrepiece of its Étourdissant collection bracelet, launched at Art Basel Miami. Lit up from within with every shade of blue alongside flecks of neon green and swirls of violet, this one-of-a-kind Cartier bracelet shows that the opal jewellery trend is still very much alive and kicking.

My soft spot for the Paraiba tourmaline was sated by one of the most covetable jewels of the year, courtesy of Chopard: an electric blue 41.57ct oval Paraiba tourmaline ring that immediately transports you to sunnier climes. VanLeles also harnessed the luscious blue of Paraiba tourmalines in a pair of earrings that showed an exuberant use of colour, pairing the Paraibas with deep pink rubellites. Elsewhere, Fabergé embraced the colour blue in all its variations in a new Emotion ring, set with more than 300 gemstones of myriad sizes, including sapphires, opals, Paraiba tourmalines and topazes.

At first glance, this Tiffany ring from the Blue Book collection has the same tropical blue of a Paraiba tourmaline, but the gemstone is in fact a 21.66 carat chrysocolla, cabochon cut to accentuate its evenly saturated turquoise hue. Part of the 20-piece Blue Book collection 2015, titled The Art of the Sea, Tiffany's use of this lesser-known carbonate copper mineral - often mistaken for turquoise - is part of the wider trend for using unusual gemstones, a trend that I predict will continue throughout 2016.

Emeralds - one of the "big three" gemstones - continued to enchant in 2015, with exciting designs breathing new life into this most traditional of gemstones. Giampiero Bodino thrust a spectacular emerald cabochon into the limelight with the Tesori del Mare ring, while Boghossian showed real creative flair with a pair of mismatched earrings set with an emerald and diamond hand-carved into the shape of a lotus flower. And who can resist the daring play of colour in the Tresse Émeraude ring from the Soie Dior high jewellery collection, designed to emulate the pleats in a couture dress - a jewel of which Monsieur Christian Dior himself would surely be proud.

In November, Bulgari hosted a pop-up exhibition at Harrods that was a celebration of some of its most famous customers in history, with red-carpet-worthy jewels to match. The Serpenti necklace on show, set with 94 perfectly graduated Zambian emerald beads, would be more than bold enough to satisfy the demanding tastes of Bulgari's best-known diva, Elizabeth Taylor, and she would have loved the fact that the ruby and diamond snakes are removable and can be worn as earrings.

In keeping with the year's predominantly blue theme, and the trend for tanzanites, British designer Ornella Iannuzzi - who was named Jewellery Designer of the Year at the 2015 UK Jewellery Awards - debuted the L’Exceptionnelle pendant at the Goldsmiths Fair in autumn. Ornella invested more than 200 hours in the hand-carved 45ct tanzanite crystal pendant, which quickly became one of my favourite pieces of tanzanite jewellery of the year.

Did I mention that I love Paraiba tourmalines? So you can imagine my joy when I visited Arunashi at the 2015 Couture Show Las Vegas and was greeted with a blindingly beautiful cuff bracelet set with a central 23 carat Paraiba tourmaline, surrounded by opals. This one-of-a-kind cuff sums up what was outstanding for me in 2015: when a strong use of colour is combined with daring creativity, the result is always breathtaking.