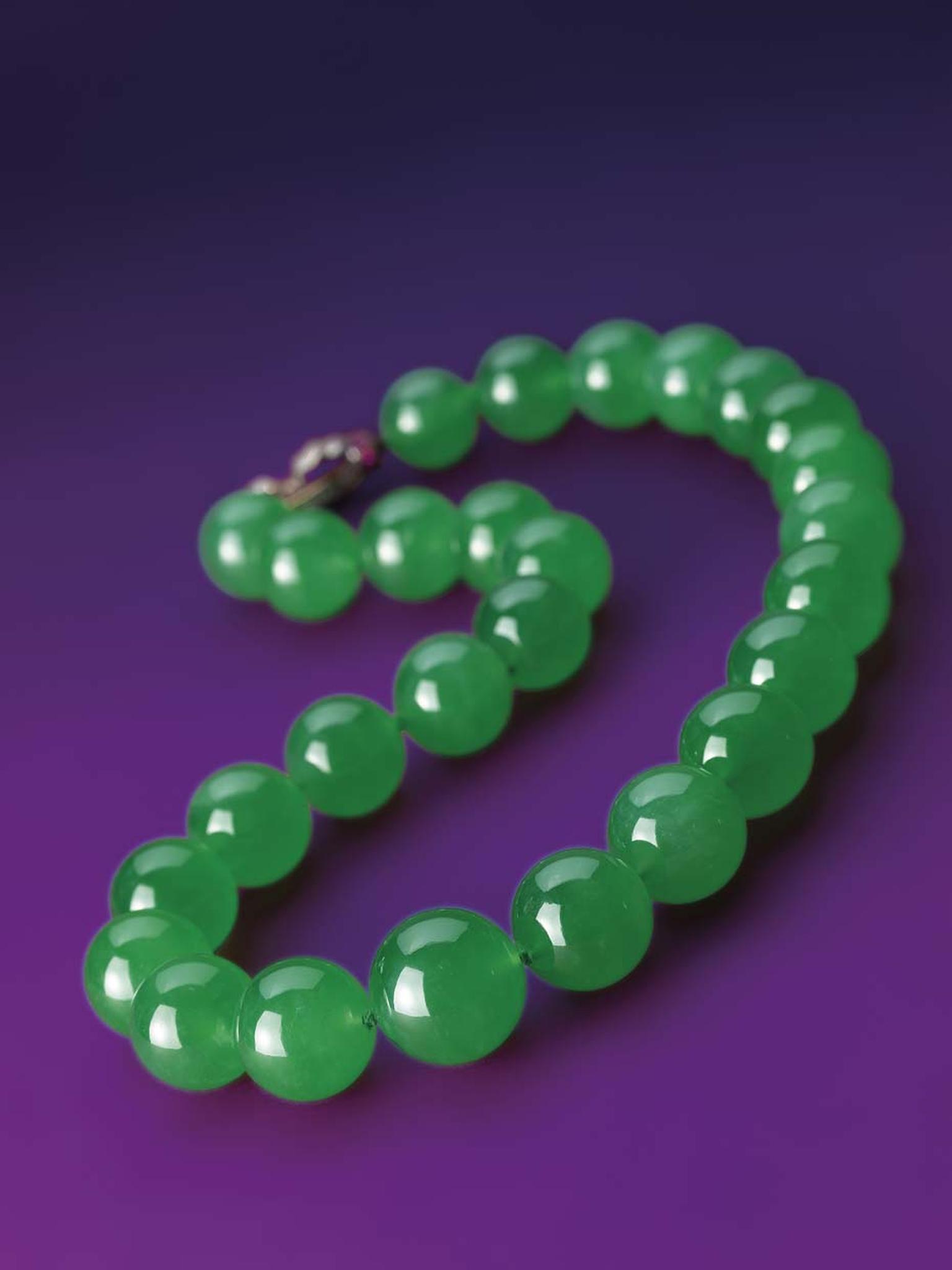 Three extraordinary necklaces will go on sale at Sotheby's Hong Kong next month as part of its Magnificent Jewels and Jadeite Spring Sale 2014.

Known as the Tremendous Trio, the three necklaces are described as "representing the ultimate in diamonds, gemstones and jadeite in phenomenal proportions".

With each piece expected to fetch between US$7.3 million and US$12.8 million, they are the highlight of the auction, which will take place on 3-6 April 2014 at the Hong Kong Convention and Exhibition Centre.

The trio includes the historical Hutton-Mdivani Jadeite Bead necklace as well as a stunning DIF diamond necklace totalling 85.33 carats and a magnificent Burmese ruby and diamond necklace, set with 60 pigeon's blood rubies totalling 104.51 carats. The former hardly needs an introduction, but to jog your memories this is the greatest jadeite bead necklace in the world and was previously owned by socialite and Woolworth heiress Barbara Hutton.

The diamond necklace was created by Indian jeweler Nirav Modi and features 17 brilliant-cut gems in a clean and elegant design. It is the first necklace in an Asian auction to feature only diamonds of Type IIa classification and Excellent Cut, Polish and Symmetry (Triple Xs) as main stones, with the largest gem weighing in at over 10 carats.

Referred to as The Red Emperor, the Burmese ruby and diamond necklace lives up to its name with a cascade of stones in striking crimson. A unique feature of Burmese rubies is their fine needle-shaped inclusions, which diffuse the light evenly to create a soft glow.

The rich history of The Red Emperor necklace spans more than a century. Created by James W Currens for Fai Dee, some of the stones in the necklace were collected by the company's founder, Roop Chand Lunia, more than 100 years ago.

Cutting and polishing the rubies to bring out the best in each rough stone took eight years, but the end result is a necklace where every stone is free of heat treatment and has been certified by the Gemological Institute of America. The natural beauty of the rubies is enhanced by brilliant-cut, pear-shaped and oval diamonds, culminating in an elegant and sophisticated necklace of the very highest quality.

While the three necklaces will no doubt be the focal point of next month's proceedings, Quek Chin Yeow, Deputy Chairman and Head of Jewellery Department at Sotheby's Asia, says: "They are complemented by an extraordinary selection of jewels of exceptional quality, the most coveted brands and designs, and the best qualities encompassing all categories, including a 102.61 carat 'Royal Blue' sapphire necklace that signifies the first occurrence of sapphires of its proportion and calibre in the auction market in Asia. The upcoming sale promises to be a wonderful feast for jewellery connoisseurs."

The third-largest jewellery auction house in the world, Sotheby's Hong Kong continues to bring record-breaking jewels to Asia. The gems in the aforementioned 102.61 carat 'Royal Blue' sapphire necklace, which is expected to fetch between US$2.8-3.8 million, have undergone no heat treatment and are virtually inclusion-free.

Also set to go under the hammer at Sotheby's Hong Kong is a Burmese Mogok ruby and diamond ring, which complements The Red Emperor necklace, as well as a Zip Couture necklace created by Van Cleef & Arpels. The design of the latter is based on an idea by the Duchess of Windsor, which first appeared in the maison's collection in 1951.