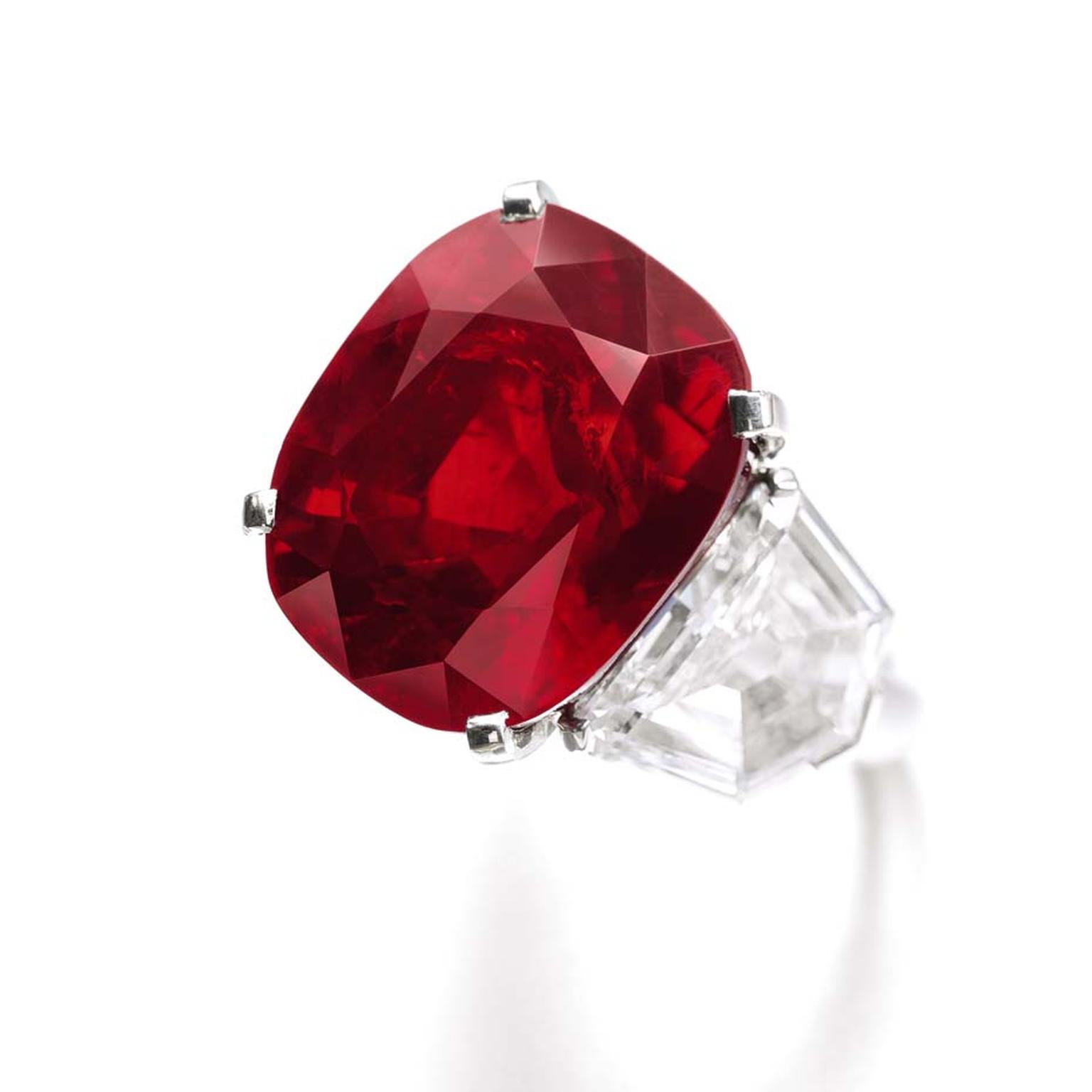 This week's Sotheby's jewellery auction in Geneva set a new world record for any coloured gemstone when the exceptional Sunrise Ruby sold for an astonishing $30.3 million. More than tripling the previous record, it is officially the most expensive ruby in the world.

Read more about "The Sunrise Ruby" - the world's most expensive ruby.

The record-breaking ruby also helped take the total sales at Sotheby's Magnificent Jewels and Noble Jewels auction on 12 May to a dizzying $160.9 million, the highest total ever for a jewellery auction.

Weighing in at 25.59 carats, the untreated Burmese ruby in the most desirable "pigeon's blood" shade of red was mounted into a ring by Cartier jewellery.

The final sale price also set a new record for any piece of Cartier jewellery, as well as being the highest sum ever paid per carat for a ruby.

In total, six world records were broken at the Sotheby's jewellery auction. A pair of sapphire Cartier earrings sold for $3.4 million, setting a new record for a pair of Burmese sapphire earrings. Another unique piece of jewellery, this time a diamond and sapphire Cartier brooch, broke the record for a Kashmir sapphire jewel, selling for $6.16 million. The final record-breaking jewel was a double-strand pearl necklace that sold for just over $7 million, establishing a new record for a two-row natural pearl necklace.

In a jewellery auction filled to the brim with exceptional pieces, other standout jewels included a diamond Cartier necklace, which sold for $7.24 million. A pink diamond, believed to have once belonged to the niece of Napoleon I, Princess Mathilde of Bonaparte, fetched the second highest price of the night at $15.9 million. While pink diamonds are incredibly rare, the 8.72ct stone is also remarkable for its cushion-cut shape, which is rarely seen in rose-hued gemstones. Nicknamed "The Historic Pink Diamond", the coloured gemstone was only recently brought to the public's attention, having languished in a bank vault for the past 70 years.

A collection of 17 jewels that used to belong to Mary, Duchess of Roxburghe also garnered a great deal of interest from buyers, with all pieces being snapped up for a total of $8 million - six times the pre-sale estimate. Highlights from the estate included a 1930s Cartier tiara, which sold for $2.59 million, and another tiara dating back to the 19th century, which achieved $848,326 after an intense bidding battle.

David Bennett, worldwide chairman of Sotheby's International Jewellery Division, attributed the "lively bidding" to the continuing worldwide demand for the finest diamonds, coloured gemstones and signed pieces. He said: "Tonight's record result is the reflection of the outstanding quality of the pieces in the sale across the board. The Sunrise Ruby captivated me from the moment I saw it. Such an exquisite stone truly deserved the multiple record-breaking price. The exceptional results achieved for the other Cartier jewellery in the sale - including two world auction records for sapphires - and for 'The Historic Pink Diamond' are evidence that the market for exceptional jewels is going from strength to strength."