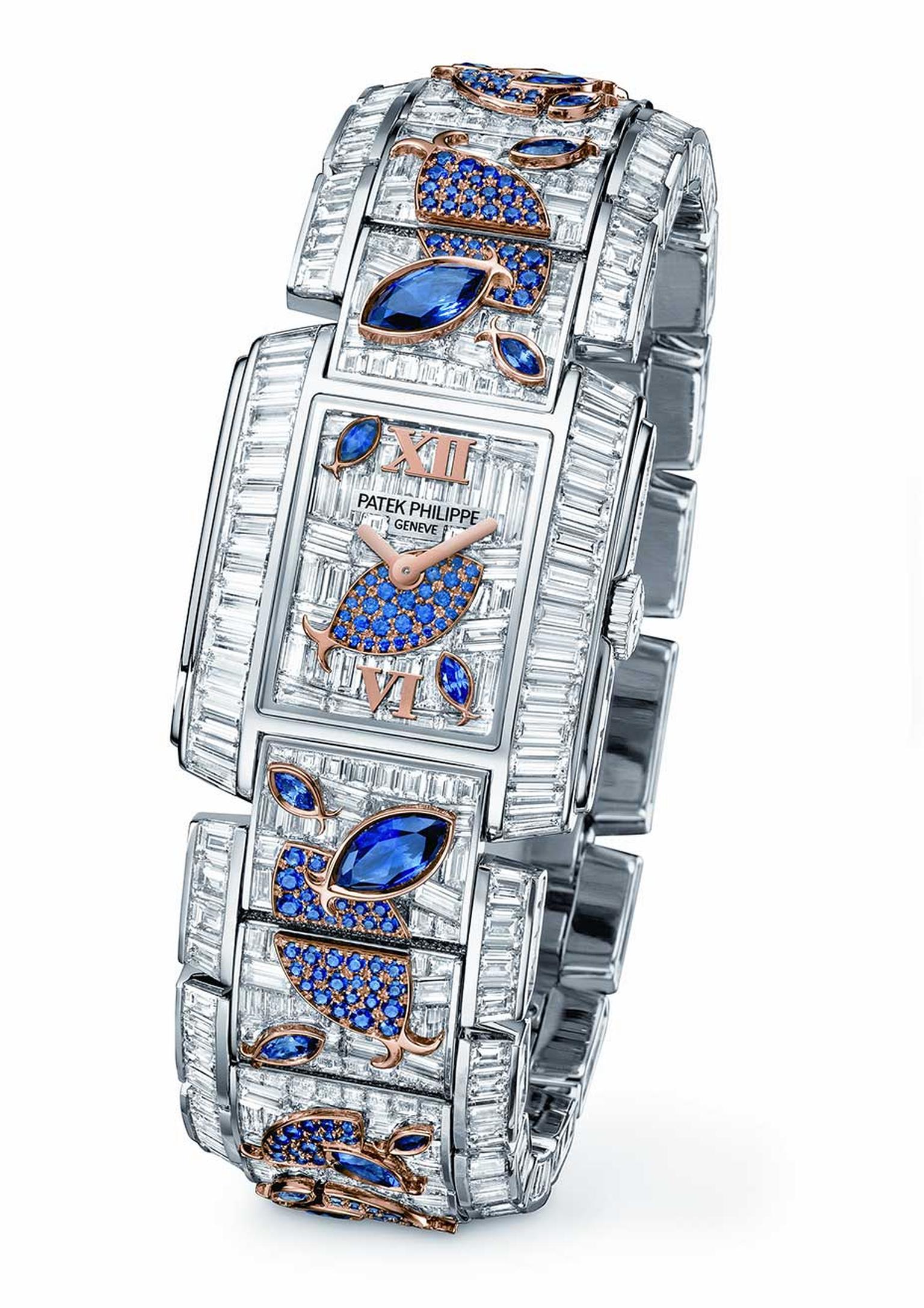 It is a momentous year at Patek Philippe as the House of Calatrava puts the finishing touches on its 175th anniversary festivities. Kicking off the year with a new Baselworld stand known as the 'pavilion of light', Patek unveiled a handful of novelties to keep appetites whetted until the big day in May.

Like a miniature aquarium swimming with diamonds and fish, the Twenty-4® Haute Joaillerie Ref. 4909/110 "Aquatic Life" shows the world that Patek Philippe is at the top of its trade when it comes to the art of gem-setting. Set with 1,937 diamonds and 43.74 carats of sapphires, the beauty of the underwater scenery is achieved by the different cuts of precious stones. Closed-set baguette diamonds on the extremities of the case, flanks and bracelet function like sparkling bulwarks to contain the animated sea life in the small compartments.

Inside the mini aquariums that form the bracelet and dial of this spectacular jewel, the baguette diamonds have been invisibly set - one of the most challenging techniques from a gem-setter's point of view - to create a watertight liquid environment for the blue sapphire fish, some of which are inlaid with rose-gold beads to mimic their natural speckles. And for animation of a horological kind, Patek's beautifully finished manual calibre 16-250, with its 38-hour power reserve for the hour and minute functions, can be admired through the case back.

Patek Philippe's next high jewellery watch has taken the elegant contours of the Calatrava model and adorned them with a mesmerising diamond ruff collar. Marrying the craftsmanship of watchmakers, casemakers, lapidary artists and gem-setters, the Calatrava Haute Joaillere Ref. 4895R has draped the dial of its 1932 ancestor with a lavish swathe of 162 baguette diamonds. The selection of diamonds for this wreath is a complicated process, requiring the gemologist to locate 162 internally flawless baguette diamonds that the lapidary must cut in accordance to its position on the matrix for a perfect fit. The black lacquered dial, with applied rose gold hour markers, contrasts beautifully with the blaze of gemstones.

The manually wound mechanical calibre 215 found inside inside, developed for women's watches, has been going strong for more than 40 years. Refined over time with the addition of a Patek Philippe Gyromax® balance as well as a patented Spiromax® balance spring made of Silinvar®, the legendarymovement can be admired through the sapphire crystal on the case back of the Calatrava.

The Gondolo collection, launched in 1993, was Patek Philippe's contemporary take on the Art Deco style. This year, the Ladies Gondolo Ref. 7042/100R-001 has been generously embellished for the 175th anniversary gala with an evening dress of diamonds and pearls.

No surface on the cushion-shaped case of the Gondolo has been left untouched. The 556 diamonds of different cuts and sizes swirl around the dial and bezel to meet the opalescent Akoya pearl bracelet,with rose gold decorative links and princess cut diamonds.  For women who also like to flaunt their movements, the legendary manually wound mechanical calibre 215, with a 44-hour power reserve, can be admired from the case back.