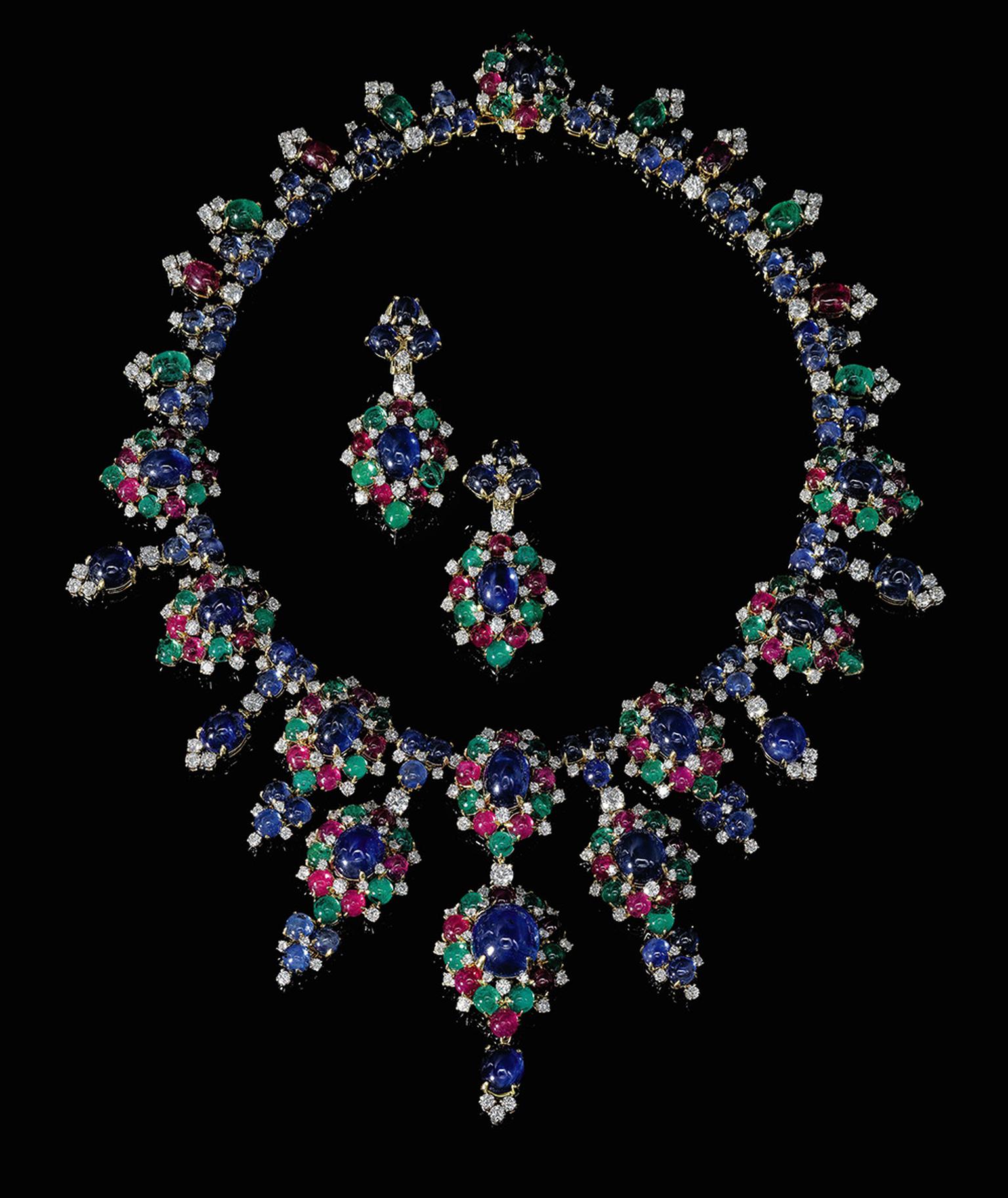 Sotheby's annual spring sale of Magnificent and Noble Jewels takes place in Geneva on 14 May 2013, and our auction specialist Joanna Hardy has chosen some of the pieces that have caught her eye. She also got to try some of them on in London during an exclusive auction preview:

Sotheby's sale of Magnificent and Noble Jewels is led by an important collection of Bulgari jewellery belonging to the enigmatic Italian actress Gina Lollobrigida (read more about the collection here). 22 of La Lollo's jewels are up for auction, which reflect her enjoyment of, and passion for, jewellery - and, of course, Bulgari.

Lot 663 is easily my favourite. A magnificent diamond necklace/ bracelet combination dating from 1954 (estimate: 285,000 - 470,000 CHF), it is such a versatile piece - something that the Italian jewellery house has always excelled in. In the 1950s, Bulgari made jewellery that you could wear in different ways, and Lot 663 can be worn as a pair of bracelets, a necklace or a diadem (decorative headpiece). Bulgari is best known for its creative use of coloured stones, but in this piece it has substituted colour for design, setting baguette and brilliant-cut diamonds in a wonderful floral motif.

I was fortunate enough to try on some of the pieces from Sotheby's spring sale recently in London. Lot 582 (estimate: 190,000 - 380,000 CHF) - another necklace that is Bulgari through and through - was quite spectacular to look at. Circa 1965, it is set with cabochon sapphires, rubies and emeralds, highlighted with brilliant-cut diamonds. Beautifully articulated and a joy to handle, Bulgari got it just right with this piece. Also being sold in the sale - Lot 583 - are the matching ear clips (estimate: 19,000 - 29,000 CHF).

Lot 585 is a late 19th century fancy yellow diamond jewel that was formerly in the private collection of his late Imperial Majesty Sultan Ahmad Shah Qajar (estimate: 1,310,000 - 1,680,000 CHF). It is always exciting to see a historic stone such as this 74.53ct cushion-shaped fancy yellow diamond that hasn't been recut.

Lots 1, 2 and 3 (estimate: 11,000 - 38,000 CHF) are part of a collection of 34 jewels that were designed by the celebrated French jewellery designer Suzanne Belperron for her close friend Cécyle Simon. The combination of strong, abstract shapes and colour is very clever. It was brave of Belperron to contrast pale stones with bright stones, but it works. Rather than one outshining the other, they complement each other perfectly.

'My style is my signature" was Belperron's motto, and with this belief she consequently did not sign her jewels, which has made it difficult in the past to authenticate her jewellery. But since the publication of a book devoted to her work in 2011, written by Sylvie Raulet and Olivier Baroin, verification has become much easier and people are feeling more comfortable buying her work because each piece comes with an authentication certificate from Olivier Baroin. You could easily wear any of her pieces today - she was always ahead of her time.

I was also able to handle Lot 34, a white chalcedony Belperron dress clip (estimate: 23,000 - 33,000 CHF). She always placed stones with such care that her jewels appear quite different depending on which angle you look at them from. All of Belperron's designs are three- dimensional and have an energy that is quite unique.

Finally, Lot 441 (estimate: 125,000 - 175,000 CHF) is a very interesting suite of jewels because not only are they beautiful, I haven't heard of the jeweller who created them, the German goldsmith Emlar Seidler. Dating from the first half of the 20th century, the pieces are very similar in style to the British arts and crafts movement (1880-1914), which suggests there may have been some overlap. The bracelet is almost as decorative on the back as it is on the front, and the reverse of the rings shows a similar attention to detail. Seidler clearly took great pride in making them.