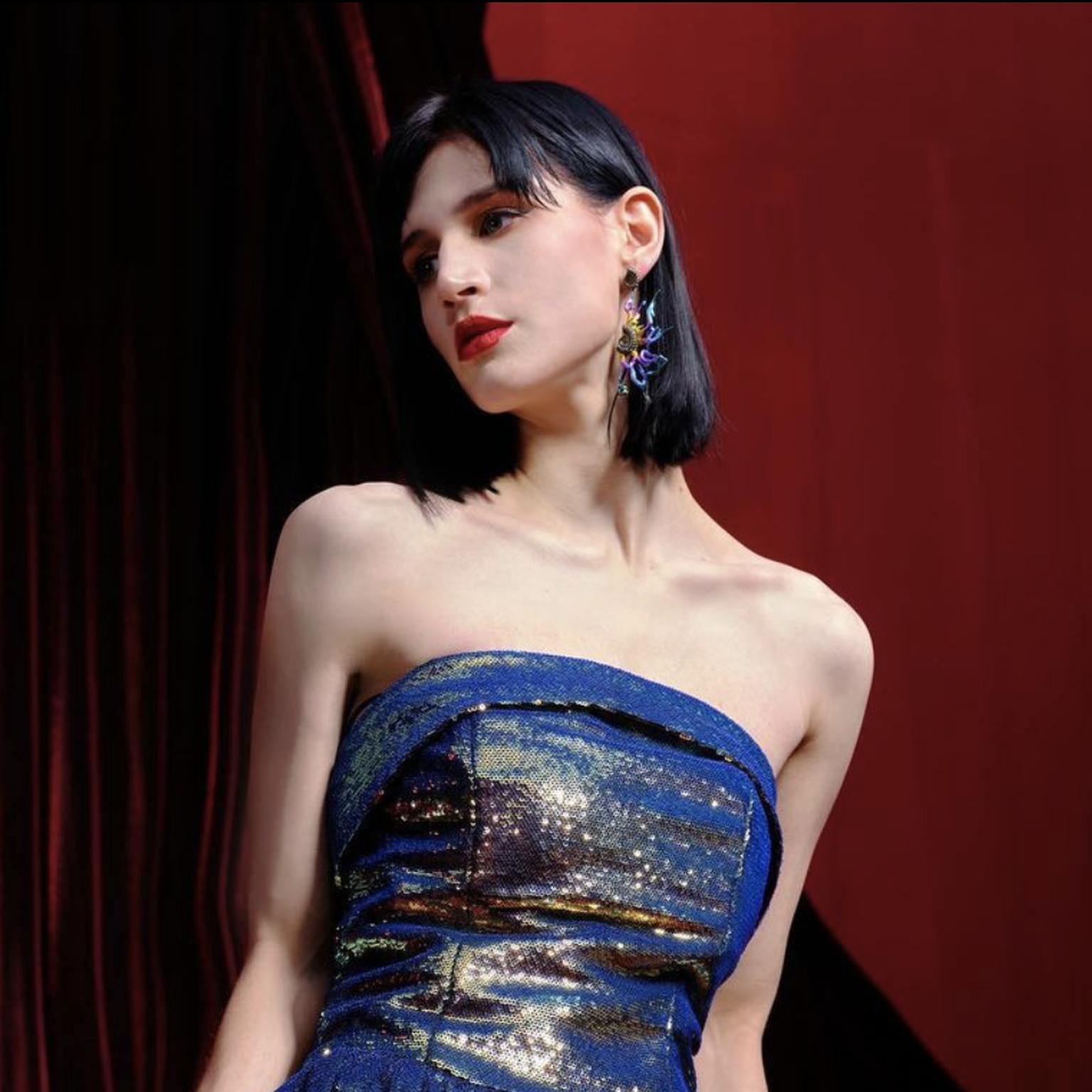 Born in Guangdong province in Southern China, Ray Salenteya’s birth name is Lin Ziliang, but a life-long interest in the mysteries of sorcerers and Nordic mythology has resulted in his name change. Salenteya, he explains, means ‘the one who earns his power and blessing from the sun’.

The millennial jewellery artist was initially drawn to fashion - inspired by his grandfather, Chang Tai-lin, a painter and famous art photographer in his time whose evocative images of his travels in Europe in the 1970s featured chic young women framed in cultural settings. Although he knew little about fashion, surrounded by these photographs the young Salenteya recognised this is where his future would lie. After a brief spell at design school, he opened his couture atelier in Beijing seven years ago creating a distinctive style that was quickly adopted by Chinese celebrities. This has led him into the world of jewellery producing avant-garde designs created to accompany his grand evening gowns and flamboyant masculine tailoring.

How have you transitioned from couture fashion into high jewellery?

I taught myself embroidery and each season I would incorporate different precious metals and gemstones like garnets, sapphires, meteorites and malachite with yellow gold to decorate my garments with beautiful mysterious jewelled motifs based on Nordic fantasies. I wanted the embroidery to share a meaningful story while demonstrating the spirit of craftsmanship. It was from developing these techniques for couture that I began designing jewellery.

Are there any synergies in the creative process between designing fashion and creating fine jewellery pieces?

As a couturier, I see the jewellery as binding the legends with the style and craftsmanship of my collections – the jewellery is deeply connected with the embroidered designs.

How has your interest in Norse mythology manifested itself in your designs?

I am trying to produce in my jewellery something people have never seen before. I like to describe my creations as mythical. Since childhood I have recognised something weird and special in the legendary stories and sagas of the Vikings. Stories like the Aurora being a ‘bi-frost bridge’, a glowing arch that leads fallen warriors into Valhalla, and how the northern lights are starry reflections off the Valkyrie armour. I present these fantasies in the form of jewellery. They inspire the choice of metals and gemstones, the colours and craftsmanship that I put into my designs. I’ve learned about the talismans in mythology in terms of the stones, metals, intricate shapes and beauty, and use that in the storytelling of my jewellery and couture embroideries.

The Art Nouveau aesthetic is also an influence?

I collect vintage Art Nouveau jewellery and have a real respect for the creators of that era especially Rene Lalique. Large opals - one of my favourite gemstones alongside emeralds and tourmalines - and the darkened metal, sinuous snakes and beautiful dragons and the use of nature all evoke the Viking mythology that I love. I also admire Wallace Chan and JAR for their craftsmanship and spirit for always creating something new and inspiring.

Talk us through your design process?

I like using rough stones rather than cut ones because their inclusions and textures have a fascinating character. I might, for instance, surround a garnet in its mineral state with a fluid sculptural design in titanium or colour-plated white gold. This is sometimes designed with computers but mostly hand sculpted and then made in workshops in Macau, Guangzhou, or Paris. Many designs incorporate a talismanic Vegvisir motif on the reverse (underside of a ring or brooch). It is an Icelandic symbol, like a compass, which a powerful meaning ‘Never lose your way’.

Which jewel are you most proud of having designed so far and why?

It is the Muspellheim ring which is inspired by a Viking legend. I wanted to recreate the flames in the jewel and so used different techniques including 3D printing, colour-plating of gold and engraving.

How can we buy your jewels if we don’t live in China?

My jewellery is not available online, but I can be reached via Instagram @wizardray and through China Jewellery and Couture salon. We are planning a new website to show the next collection and the art jewellery pieces.