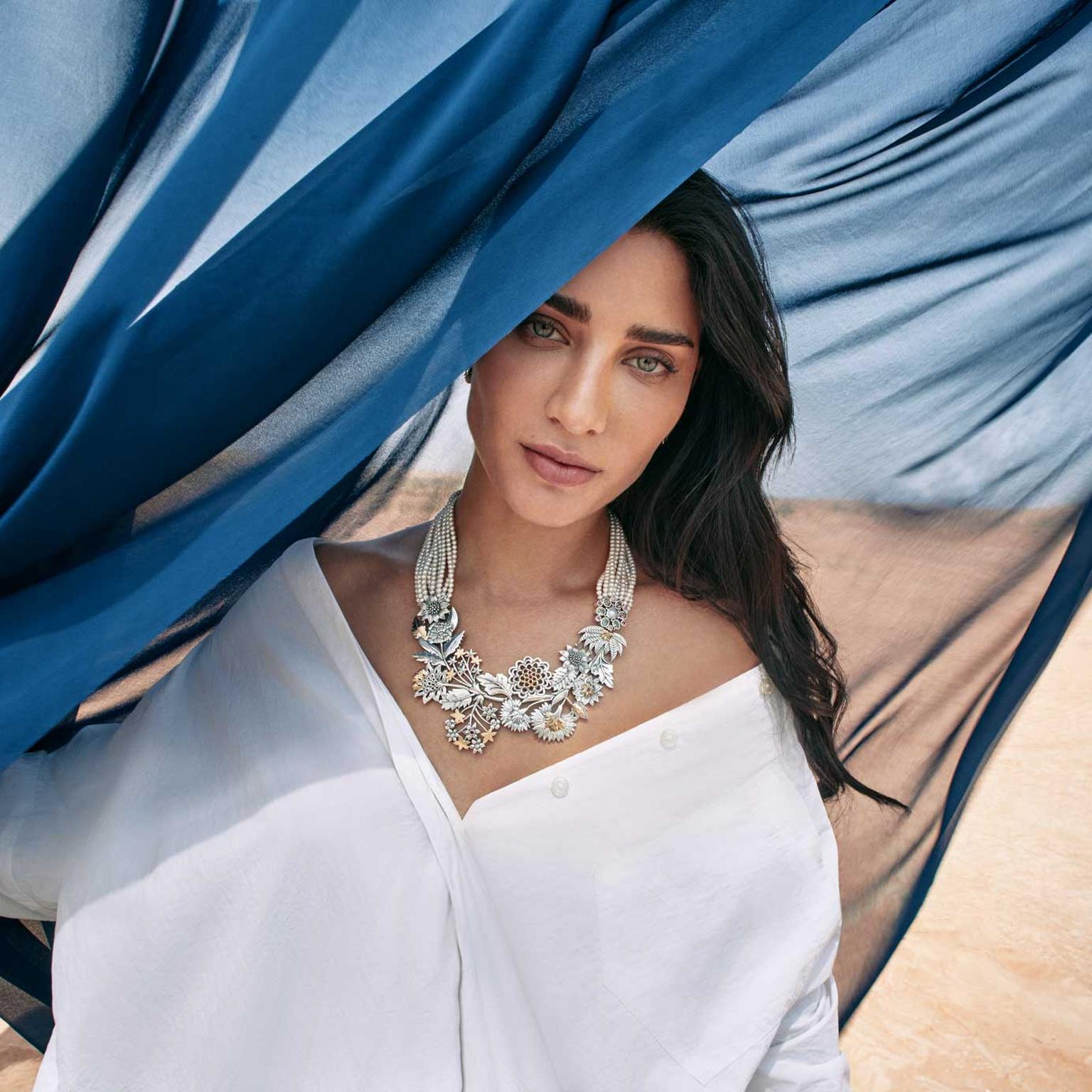 Azza Fahmy Jewellery, the Egyptian house associated with luxurious, handcrafted jewels launches Wonders of Nature: Reimagined. The beautifully crafted new jewels are clearly in the house style. They are rich in exotic and historical cultural references from Egyptian peasant styles to the Ottomans, Cleopatra and Arabic calligraphy. They feature ancient gold-smithing techniques such filigree and hand twisted gold coils, opulent gemstones and flowing scripts. But there is subtle shift in this collection, a reimagining of the brand’s spirit.

Head of design, Amina Ghali, daughter of the founder Azza Fahmy, says: ‘During the lockdown creativity flowed, we had time to look more closely at Nature and to pause and question the bigger meaning of life. As we were separated from our loved ones, more of us were looking to connect in deeper ways. The words that came to mind were love and peace, I know it’s borderline cliché but it was right for the time. I have expressed this mood in Wonders of Nature: Reimagined and designed jewels that connect on different levels and bring joy to the wearer’.

The result is a re-working of the house motifs with a bright new eye and a lightness of touch, but never skimping on opulent colour combinations and the use of larger colour-saturated gemstones. And indeed a quiet revolution has been taking place in the workshops of Cairo. ‘This is a new path for us and a leap forward,’ explains Amina Ghali ‘We are working in technically more sophisticated ways to achieve more layers, greater details all without losing the hand made feel of every pieces. We use technology such as 3D printing to model the jewels and to show us just how far we can go in terms of refining and fine tuning each component of our jewels. From the complex, multi-levelled Beaded Spring necklace to the filigree and stone settings on each ring and earring, every aspect is more refined. We did this through training in our workshops and looking at jewellery from a different perspective.’

While the behind the scenes of Azza Fahmy is moving ahead, so too are the designs but always within the house style so it is no surprise that the eternal snake dominates part of the collection. Amina Ghali explains: ‘Snakes keep coming back to me. They have been a part of our heritage for thousands of years, and in particular the last 200 years. The snake was worshipped as a god in Ancient Egypt and powerful women from Cleopatra to Queen Victoria with her snake engagement ring are associated with this animal. Snakes are a symbol of rebirth as they shed their skin to reveal a new self. I think that idea is so relevant now as we start again after the turmoil of the past years.’

The classic Snake Hoops with glinting sapphire eyes have been shrunk to a daintier, easy to wear size but still exuding the allure of the original Egyptian peasant jewels on which they are based. On the other end of the scale, a one-of-a-kind Cabochon Snake necklace glows with glossy tourmaline cabochons in imperial tones of mauve, red and green. A snake’s head doubles up as a clasp: gently push the ruby on its head and the snake’s mouth releases the fastening hook. The stones are in Turkish bezel settings that sit low around the stone allowing the full beauty of each gem to catch the light. The bottom of each bezel is linked to the next, creating an invisible and highly mobile link between each one giving the necklace its slinky feel.

Always with an eye to how women wear jewellery, the Wrap Around Snake ring is small enough to be worn like a signet ring on the baby finger or stacked. Despite its diminutive size in addition to the symbolism of the Snake itself, its head is decorated with an eye to ward off evil spirits. Attention to detail is everywhere and the ring is crafted using gold wire coiled in the traditional way.

Stars and Crescents are the second overarching theme of Wonders of Nature: Reimagined. Egypt was a part of the Ottoman Empire for some 300 years and the star and crescents found in the medals awarded to civil servants in the Ottoman Empire inspire these jewels.  The Multi-Charm earrings dance with the movement of diamond-set stars and crescents suspended from an eye motif with an emerald in each pupil. The Ottoman Star earrings are regal yet light and easy to wear thanks to their open-work frame. Filigree details and the shine of sapphires, pearls and diamonds add a very feminine feel to these earrings inspired by medals. Likewise the Star Drop earrings transform the shape of a medal into luxuriously colourful jewels alive with the movement of asymmetric briolette drops.

The Enchantment Ottoman bracelet was designed by Azza Fahmy after seeing an Islamic bracelet in the Museum of Islamic Art in Cairo. It features four big emeralds and captures the majesty yet femininity of the original.

A third section offers three handcrafted masterpieces, each laden with symbolism and designed by Azza Fahmy. The Calligraphy Earrings, which are based on Azza Fahmy’s own Arabic script from her calligraphy classes, are composed of a gold swirl of letters that spell out the words from a love song by the famous Egyptian singer Abdel Halim Hafez.

The Beaded Spring necklace offers layers of delicate flowers in gold and silver, each petal rich in details and texture. This precious bouquet is suspended from ropes of pearls evoking awe at the splendour of Nature. The Multi-Way Art Deco necklace can be worn in four different ways and features South Sea pearls and two gold-capped drop-shaped pearls. The word ‘happiness’ in Arabic script is written on the gold clasp at the front of the necklace.

Amina Ghali distils the essence of the charming Wonders of Nature: Reimagined collection that marries tradition with a contemporary edge: ‘We start from the idea that women want practicality and refinement. There is a perception that hand crafted jewels will be heavy and uncomfortable but we have managed to make jewels that are light, and fluid and easy to wear all day. This is the way ahead.’