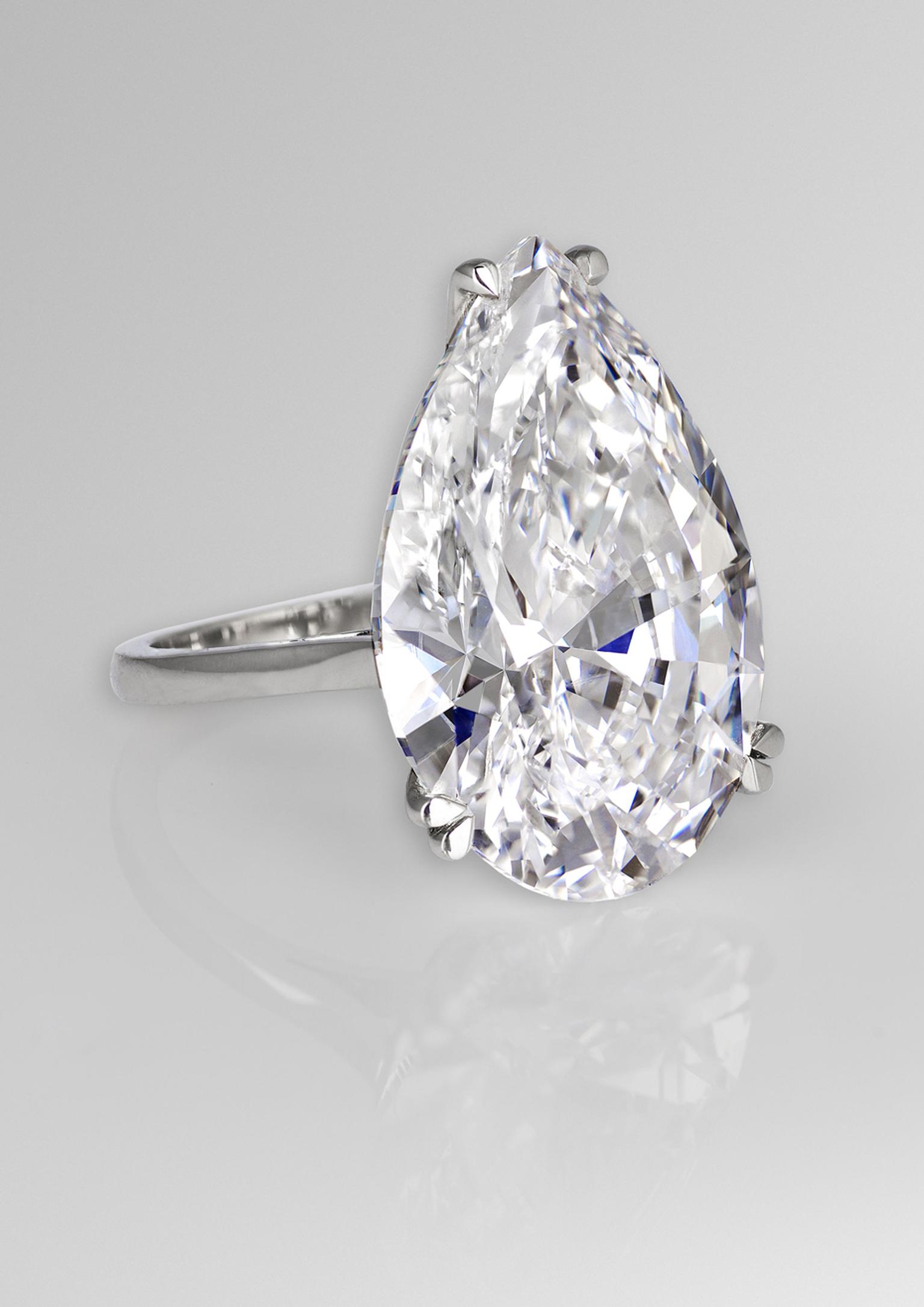 Unique, bold and sophisticated, a pear-cut diamond engagement ring is perfect for girls who aren't afraid to stand out from the crowd.

Also known as a teardrop because of its shape - with one rounded end and a pointed tip at the other - the pear-shaped diamond is a hybrid of the round brilliant and marquise-cut diamond. Pear-shaped diamonds are often used in pendants and earrings, but they make particularly stunning centre stones in engagement rings.

The cut was first created in the 1400s by Flemish cutter Lodewyk van Berquem of Bruges, who also invented the scaif or diamond-polishing wheel. Pear-shaped diamonds normally have 58 facets, with a fire and brilliance that is on a par with a round brilliant-cut diamond. Said to be one of the most challenging shapes to cut, the pear is susceptible to the "bow tie effect" - where a dark bow tie-shaped area appears on the gem - if the facets are not sliced correctly.

Ideally, a pear-cut diamond should have a ratio of 1.5/1.75 to ensure it looks elegant and in proportion. If the diamond is too long and thin, or too short and thick, the gemstone will lose some of its sparkle.  Pear-cut stones also need a specialised setting, with an extra prong to protect the delicate pointed end of the diamond from chipping.

As pear-cut stones are prone to showing up colour and inclusions, it is always advisable to choose a stone with a minimum colour of H, clarity of SI1 and a very good cut. Also avoid diamonds that have uneven shoulders or a squared-off shape, favouring those with a gently rounded arc at the thicker end of the stone.

While the pear-cut is not as common as the round brilliant-cut or even the emerald and cushion, there are still plenty of options for brides who decide to go for this stunning and unusual cut. For the eco-conscious bride, the Split Shank Platinum diamond ring from Ingle & Rhode is the perfect choice. Featuring a central pear-cut Canadian diamond, surrounded by a halo of pavé diamonds, the shoulders of the ring are also set with small diamonds for an effect that is subtle yet sparkly. Ingle & Rhodes is committed to ethical sourcing and uses only conflict-free diamonds, with the option of Fairtrade or recycled gold and platinum.

Boucheron offers a unique take on the pear-cut diamond engagement ring with its Ava Pear design, in which the central diamond appears to magically float mid-air. Thirty-five round diamonds surround the central 0.25-carat pear-shaped gemstone and band. The ring also comes with a matching crescent-shaped wedding band that seamlessly cradles the diamond engagement ring.

Chaumet's Joséphine collection is inspired by the tiara worn by the jewellery brand's first muse, Joséphine, wife of Napoleon Bonaparte. At the heart of the exquisite collection sits an engagement ring in the shape of a tiara, fully pavéd with brilliant-cut diamonds and with the most astounding pear-shaped diamond at its centre.

Set with a central pear-cut diamond and surrounded by 50 brilliant-cut diamonds on two intertwining bands, the Jardin Secret engagement ring by Piaget is the height of glamour with a sparkle that has to be seen to be believed.

The teardrop shape of the stone really comes to the fore in the classic solitaire setting on Lucie Campbell's pear-cut diamond engagement ring, while Bentley & Skinner's interpretation has the added detail of tapered baguette-cut shoulders.

A pear-cut diamond engagement ring is best suited to be worn with the tip of the diamond pointing away or towards the hand, but it is worth bearing in mind that the former position will have a very flattering and elongating effect on the finger, which makes the pear-cut perfectly suited to those with shorter fingers. It is a very versatile stone and, depending on the setting, it can look modern, classic or evocative of old-school glamour.

The most famous pear-cut diamond is arguably the 69.42-carat Taylor-Burton diamond ring given to Elizabeth Taylor by Richard Burton in 1969. The couple are believed to have bought the diamond for $1.1 million from Cartier and, following their divorce, the actress auctioned it for $5 million.

An increasing number of celebrities have also embraced the pear-cut diamond engagement ring, including Grey's Anatomy actress Katherine Heigl, who wears a three-carat diamond on a band partly fashioned out of her mother's engagement ring. Tennis ace Anna Kournikova sports a pink pear-shaped diamond, given to her by Enrique Iglesias and weighing in at an impressive 11 carats.

With its distinctive silhouette and dramatic flair, this is the perfect cut for girls who want their engagement ring to get noticed. So it's not surprising that when Victoria Beckham, who can hardly be described as a shrinking violet, decided to upgrade the marquise diamond given to her by David Beckham back in the 90s, she opted for a pear-cut diamond ring.

And who can blame her? Combining stunning brilliance and a unique shape, the pear-cut looks as impressive in paparazzi pictures as it does in real life.

PREVIOUS ARTICLE GPHG 2014: the beautiful contestants in the Ladies High Mechanical category for the Grand Prix d’Horlogerie de Genève NEXT ARTICLE The ancient art of gemstone carving makes a comeback in India 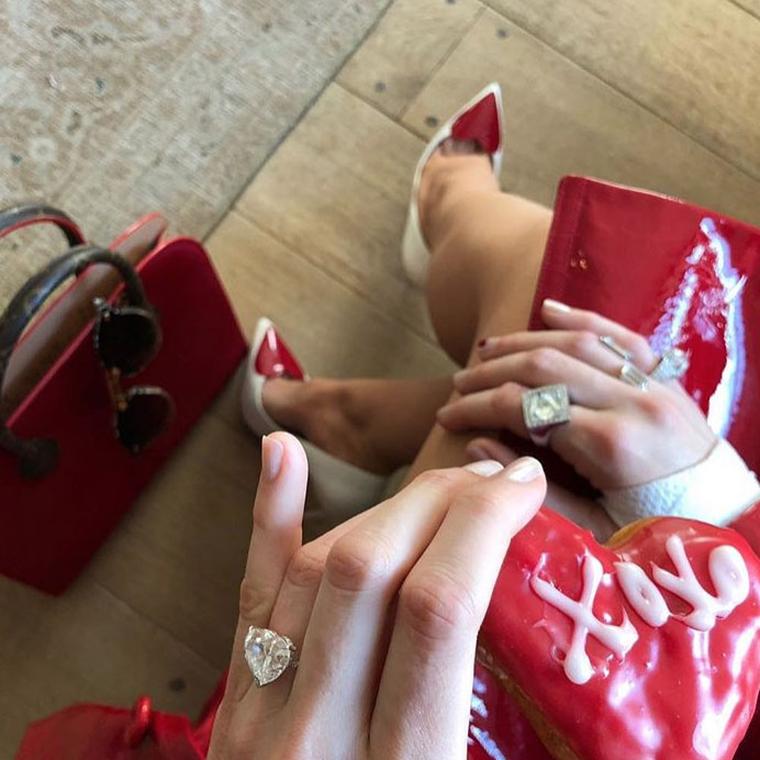 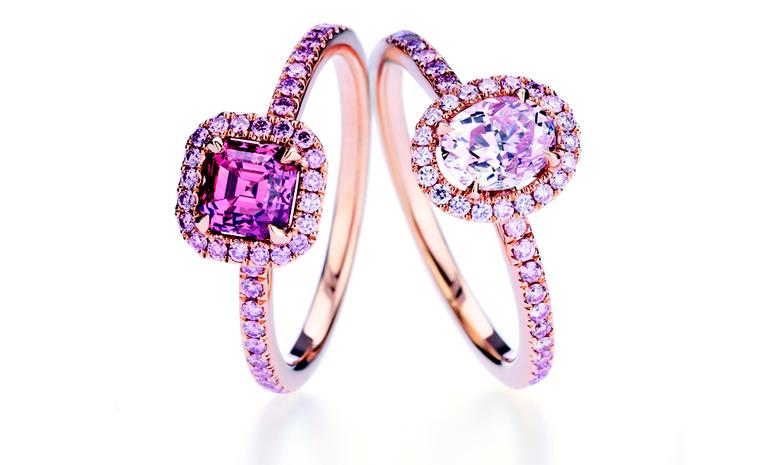