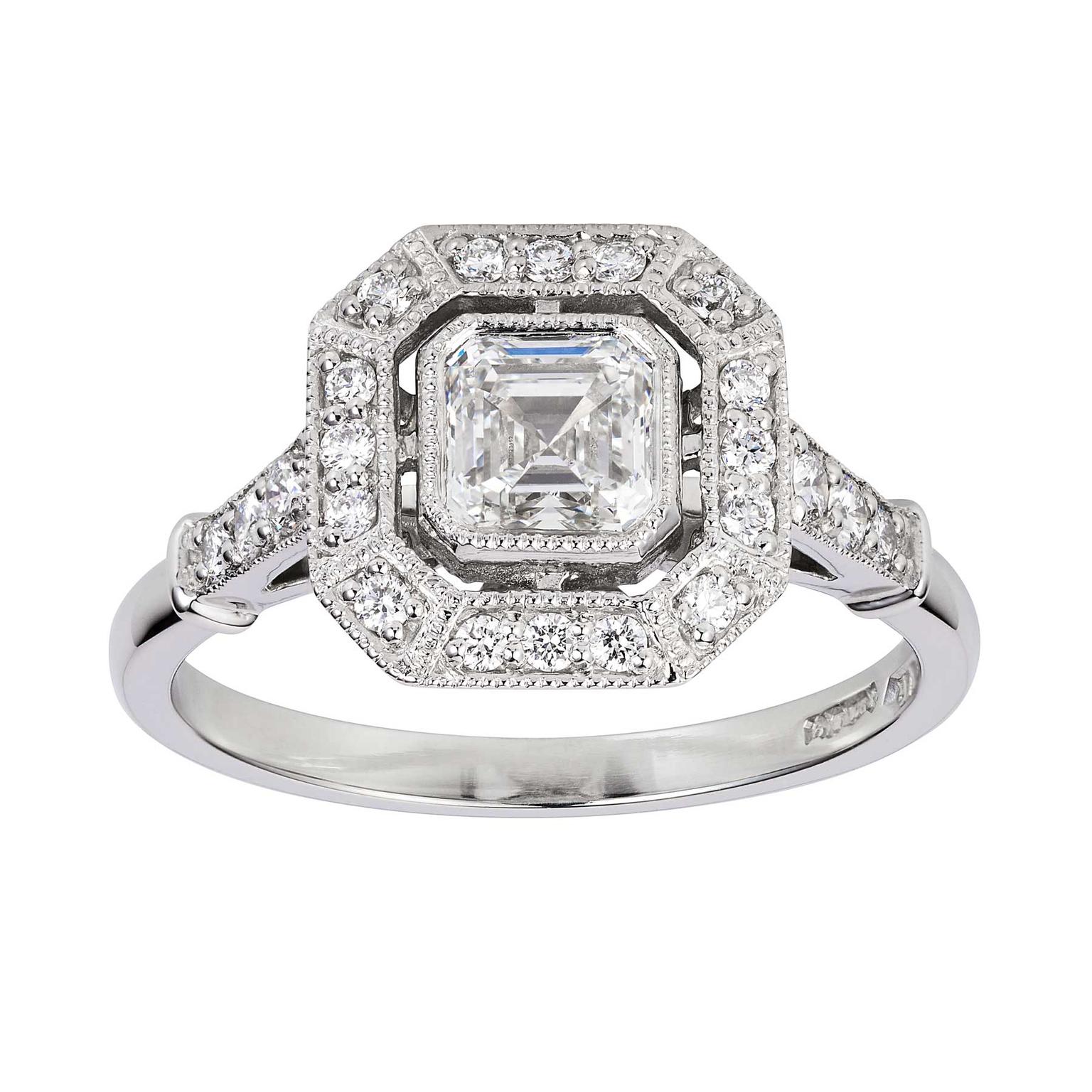 If you are a little bit obsessed with celebrity engagement rings like we are, you will have seen the pictures of Pippa Middleton wearing a sparkler on her finger that has got everyone talking. Her fiancée, hedge fund manager James Matthews, scored top marks on the diamond front: an unusual, square Asscher cut of very impressive proportions. If you, like Pippa, want something different from the ubiquitous round brilliant, square engagement rings could be the perfect choice.

With their eye-pleasingly symmetrical proportions, square engagement rings have the added bonus of appearing bigger than their circular counterparts. They also tend to provide better value for money, carat-for-carat, as less of the diamond has to be cut away to create the four-cornered shape.

The second most popular diamond cut for engagement rings, the princess cut is a square version of the round brilliant. Its pyramid shape, with four bevelled sides, maximises its brilliance, making it the ideal diamond shape for solitaires.

A patented cut with 57 or 76 facets, it is sometimes referred to as a square modified brilliant, and was created in 1979 by Ygal Perlman, Betzalel Ambar and Israel Itzkowitz. The extra facets also disperse more light through the stone, which helps to conceal any inclusions.

A radiant cut is a square-shaped diamond where the corners have been trimmed to create a softer appearance. Designed by Henry Grossbard in 1977, it was the first step-cut diamond with a brilliance to rival that of the triangular-faceted oval and pear.

Also known as a square modified brilliant, the radiant cut has 70 facets and is a hybrid of the round, emerald and princess cuts. If you’re having trouble choosing between a brilliant and a step-cut diamond, the radiant could be the perfect compromise as it offers the best of both worlds.

Another variation on the square-shaped diamond is the vintage-inspired Asscher cut with 58 long facets that create a stunning “Hall of Mirrors” optical illusion when it catches the light. Named after its creator Joseph Asscher, who went down in history as the cutter of the famous 3,106ct Cullinan diamond, the Asscher cut was never patented and, over time, it became a universal term to describe any stepped, square-cut diamond. With four cropped corners, the open table of the diamond will highlight any inclusions so it is important to choose the highest quality stone you can afford.

Tiffany has also developed its own square-shaped, mixed-cut stone, the Lucida, which was revealed to the world in 1999. Reminiscent of the Asscher cut, it took decades to perfect and combines 50 facets with the elegance of a step-cut crown and a brilliant-cut pavilion.

Tiffany christened the diamond after the brightest star in the constellation and gave it an exclusive, crossover, four-prong setting that allows light to pass through the stone.

Finally, the carré cut is the archetypal square-shaped diamond with 90-degree corners and a large upper facet. It was developed to use the maximum amount of rough stone and is often seen in antique jewellery created before the arrival of the modern princess cut.

Again, the step-cut facets will emphasise any flaws in the diamond so only gems of the very highest quality and clarity are suitable for this shape. While the sparkle is less lively than the princess or Asscher, carré-cut diamonds have a refined elegance similar to the emerald cut.

Unlike geometry, when it comes to diamonds, it seems there is more than one way to cut a square. If you’re considering square engagement rings, it is worth taking a look at all these different styles as what may appear at first to be subtle variations can change the whole appearance of the diamond.

PREVIOUS INTERVIEW The pursuit of joy: exclusive interview with Giampiero Bodino NEXT ARTICLE The rock star that got stage fright at auction 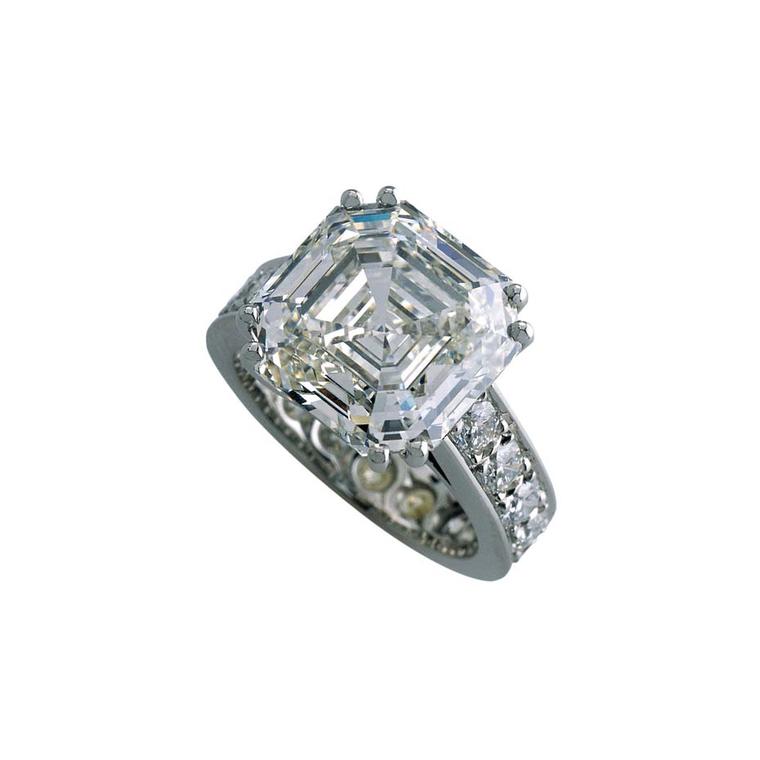 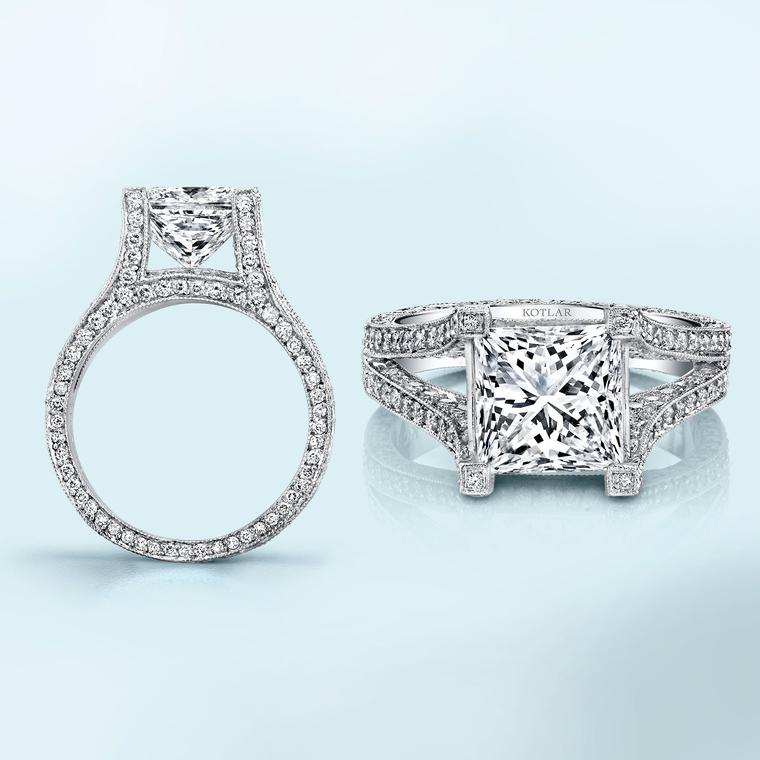 The romance of princess-cut engagement rings