A brooch belonging to the Iron Lady sold for more than 10 times its estimate.

A diamond flower brooch belonging to Margaret Thatcher was the star performer at a an auction of the Iron Lady’s jewellery, fetching more than 10 times its pre-sale estimate.

Dating back to the reign of George III at the start of the 19th century, the antique pavé-set diamond brooch sold for £158,500 at Christie’s London this week. It was one of Lady Thatcher’s most treasured jewels and she wore it in several official photographs including the portrait hanging at 10 Downing Street.

An Art Deco emerald and diamond necklace by Chaumet went under the hammer for £158,500, while a Victorian diamond brooch in the shape of a swallow, with a ruby for an eye, also outdid its pre-sale estimate of £3,000-5,000 to sell for £50,000. Another Chaumet piece, this time a cultured pearl, sapphire and diamond necklace and earring suite, sold for £52,000, which was at the top end of the anticipated price.

Besides the jewellery, other items on offer at the auction included the iconic Prime Ministerial red dispatch box from 1980-90, which fetched a staggering £242,500 against a much more modest estimate of £3,000-5,000. Similarly, a model of an American bald eagle given to Lady Thatcher by President Ronald Reagan to mark their special relationship sold for more than 30 times its estimate, with the final winning bid coming in at £266,500.

In total 185 lots were sold by Margaret Thatcher’s family at the auction held at Christie’s London with a further 200 offered in an online auction.

In the same week that the so-called Iron Lady would have celebrated her 90th birthday, Christie’s London is presenting a selection of Margaret Thatcher’s jewellery at auction.

Britain’s first and only female prime minister was famous the world over for her distinctive style, which focused on tailored power suits, pussybow blouses, structured handbags and classic pearls.

Leading the jewellery line-up at the auction on 15 December is a colourful Chaumet necklace, which is more suitable for an evening function than a heated Commons debate. Designed in the 1930s, the Art Deco emerald and diamond necklace has a pre-sale estimate of £120,000-180,000.

Other jewellery highlights include an antique diamond flower brooch that dates back to the reign of George III at the start of the 19th century. A firm favourite of Lady Thatcher, the brooch has featured in numerous photographs, including the former prime minister’s official portrait on display at 10 Downing Street. Pavé set with old cushion, pear and round-cut diamonds, the iconic brooch is expected to fetch £8,000-10,000 at next week’s jewellery auction. Her trademark pearls are also up for grabs, with a two-row cultured pearl necklace appearing on the block with a pre-sale estimate of £1,000-1,500.

A selection of Margaret Thatcher’s most memorable outfits are also up for grabs, including a number of 80s power suits and her blue velvet wedding dress with matching hat and muff, decorated with an Art Deco silver and marcasite brooch. Bidders will also have a chance to take home a piece of political history via the red leather Prime Ministerial Dispatch Box, which is offered for sale with a £3,000-5,000 estimate.

Lady Thatcher’s family took the decision to sell off her personal possessions after the Victoria & Albert Museum declined the offer to display her wardrobe as part of its collections.

The most anticipated jewellery lot was an Art Deco emerald and diamond necklace by Chaumet, which went under the hammer for £158,500. 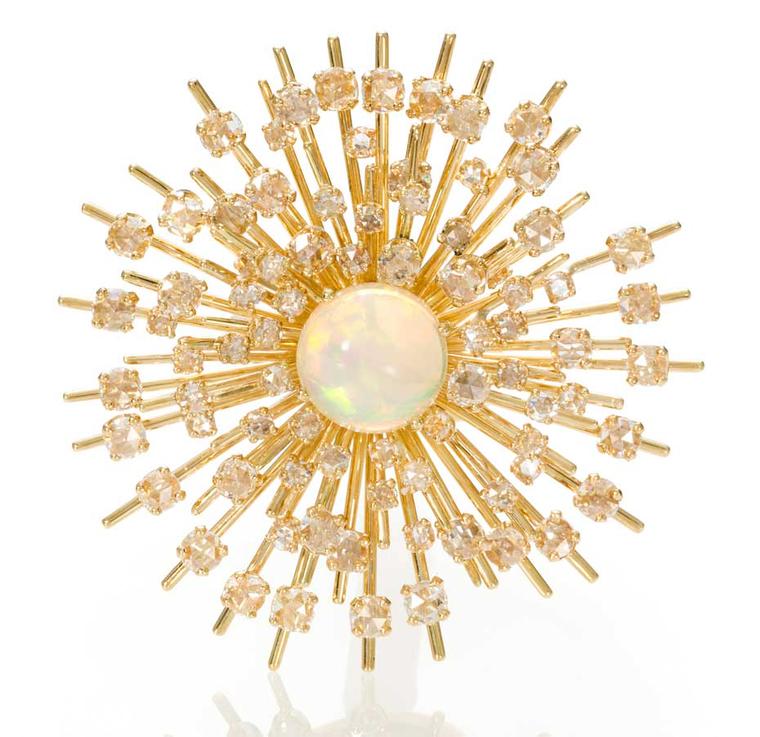