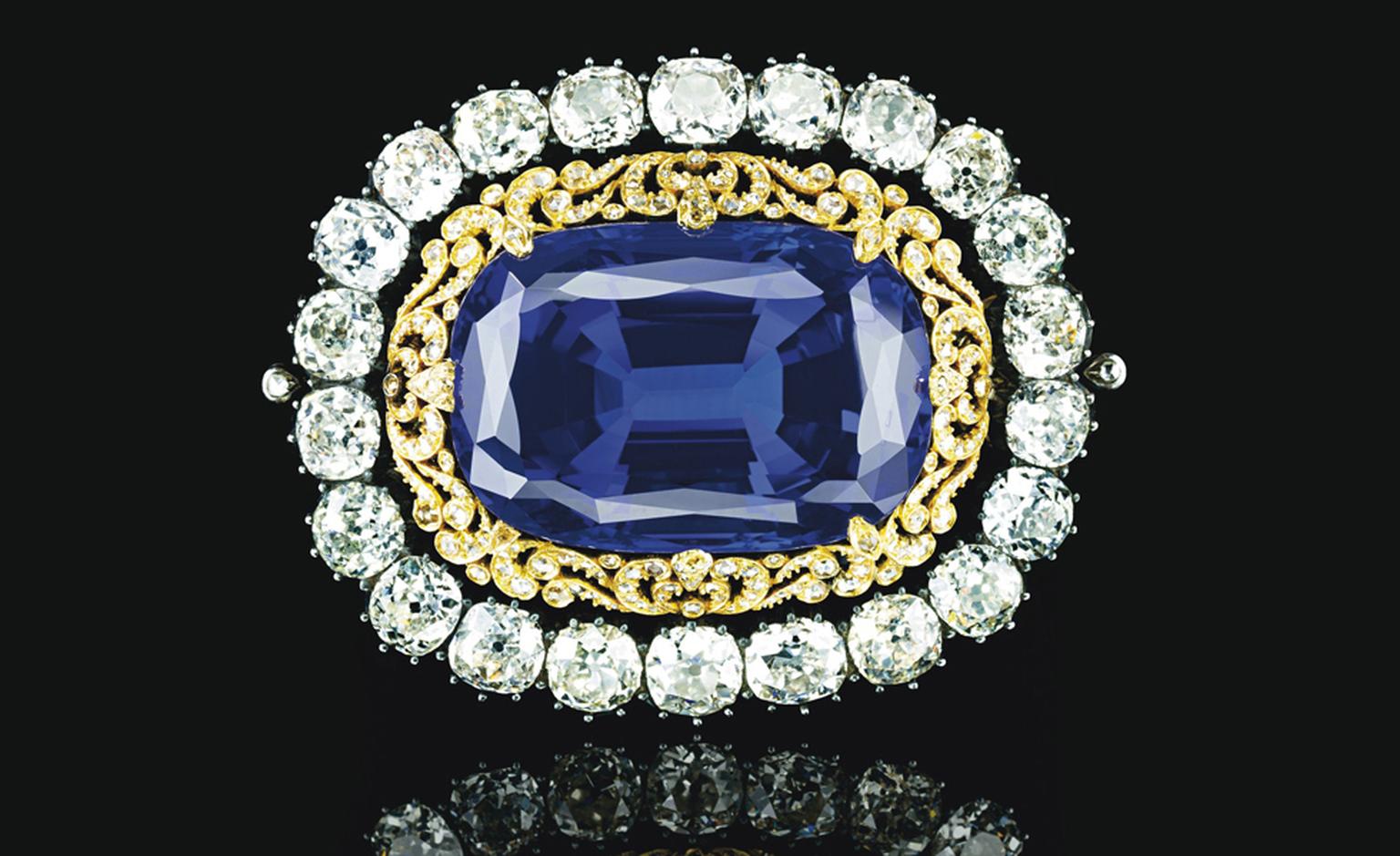 Christie's Geneva 18th May 2011 sale of Magnificent Jewels achieved a high price for the antique wonders the Mughal Spinel necklace that sold for double its top estimate of CHF 4,579,000 and the Burmese sapphires brooch five times its top estimate for CHF 6,259,00 while the heart-shaped D colour flawless 56.16 carat diamond sold for CHF9,619,00.Lot 306 (CHF1,450,000 - CHF2,400,000) SOLD  FOR CHF4,579,000 is an Imperial Mughal Spinel Necklace. The Mughal Empire in India ran from the early 15th century to early 18th century, during which era the Taj Mahal was built. During its largest territorial extent it ruled most of the Indian subcontinent and Afghanistan. From research into texts of this period, we know that the Mughal emperors had a huge love for precious stones and a strong belief in the properties of gemstones. The 11 spinel beads that make up this necklace have a gemological report to say that they are spinels from the Pamir origin and there are no indications of any treatment to enhance the stone. Stones can be treated with oils or heat to enhance their clarity or colour, but these are natural. The carat weight of these spinels equates to 1131.59cts, the largest stone weighing 164.09 carats. The Pamir region is between Afghanistan and Tajikistan. All red stones used to be referred to as 'ruby' but after gemological tests developed, there became the differentiation between the two stones. Spinels are a hardness of 8 on the Mohs scale and have a fantastic lustre similar to a diamond. Lot 291 (CHF180,000 - CHF220,000) SOLD FOR CHF 231,000 is a real rarity. It is a diamond and coloured diamond necklace but what makes it so amazing is that it is a purple diamond which is incredibly rare. Even seasoned jewellery experts have never seen a purple diamond. The purple diamond weighs 1.04 carats. This stone is a genuine phenomenon and Christie's describe it as a 'wonder of nature'. Coloured diamonds are determined by their saturation and intensity. Diamonds with a secondary colour that is purple are occasionally stumbled upon and one can find stones which are purplish-blue, purplish-red or purple-pink, but it is extremely unusual to have a pure purple diamond. A spectacular pair of Art Deco natural pearl and diamond ear pendants are lot 266(CHF570,000 - CHF760,000). SOLD FOR CHF 663,000 Pearls are one of the oldest materials used as gemstone because they need no further attention by human hand. Pearls are created within the shells of an oyster, the oyster deposits layers of aragonite (calcium carbonate) around an irritation in the shell. The layers gradually build up until a pearl is formed. They would be found in the Persian Gulf. Good quality natural pearls are fetching huge prices at the moment as they are extremely rare. This is because oysters do not grow in polluted waters and the discovery of oil in the 50's and subsequent oil rigs prohibits their growth. In the 1900's cultured pearls were introduced and there was a huge fashion for them because they were new. But now due to the rarity of natural pearls, they are extremely sought after. The drop pearls in these earrings weigh approximately 100 and 96 grains. They have a stunning lustre and amazing shape, and it is very special to have such a fantastic match. It would take many, many oysters to find such a pair. Lot 321 (CHF800,000 - CHF1,200,000) SOLD FOR CHF 6,259,000 is a Burmese sapphire and diamond brooch, of beautiful colour, mounted in gold and silver. The sapphire weighs 130.50 carats and is a beautiful deep rich velvety colour. This lovely stone is surrounded by an openwork rose-cut diamond detail and a collet-set old cut diamond frame. A necklace that looks truly fabulous on is lot 161 (CHF45,000 - CHF55,000).SOLD FOR CHF 56,250Buccellati made this in 1994 and it is a great example of something that can be assembled in different ways and worn as different jewels. It comes with original drawings, photos and a letter explaining how it can be worn as different items, and each piece has a different number on the back. It is a real showstopper and very popular to have something that can be so versatile and eye catching. Lot 165 (CHF200,000 - CHF300,000) is a superb ruby and diamond brooch by Van Cleef & Arpels 2003. In 1935 Van Cleef & Arpels patented a way of setting stones with no claws which is known as the 'mystery set', and demonstrated the finest of craftsmanship. The petals of this flower are 'mystery set' or invisibly set with rubies that come together onto a brilliant cut diamond pistil. One of the things that make this brooch so beautiful is that the petals move so delicately and naturally. Lot 316 (CHF8,600,000 - CHF11,500,000)SOLD FOR CHF 9,619,000 is an unmounted heart-shape diamond weighing 56.15 carats. It is a D colour (the top white grading) and Internally Flawless as well as a Type IIa diamond which is a type of stone that less than 2% of the worlds diamonds fall into the category of. Type IIa diamonds have an incredible optical transparency and these stones are chemically the purest of diamond crystals.