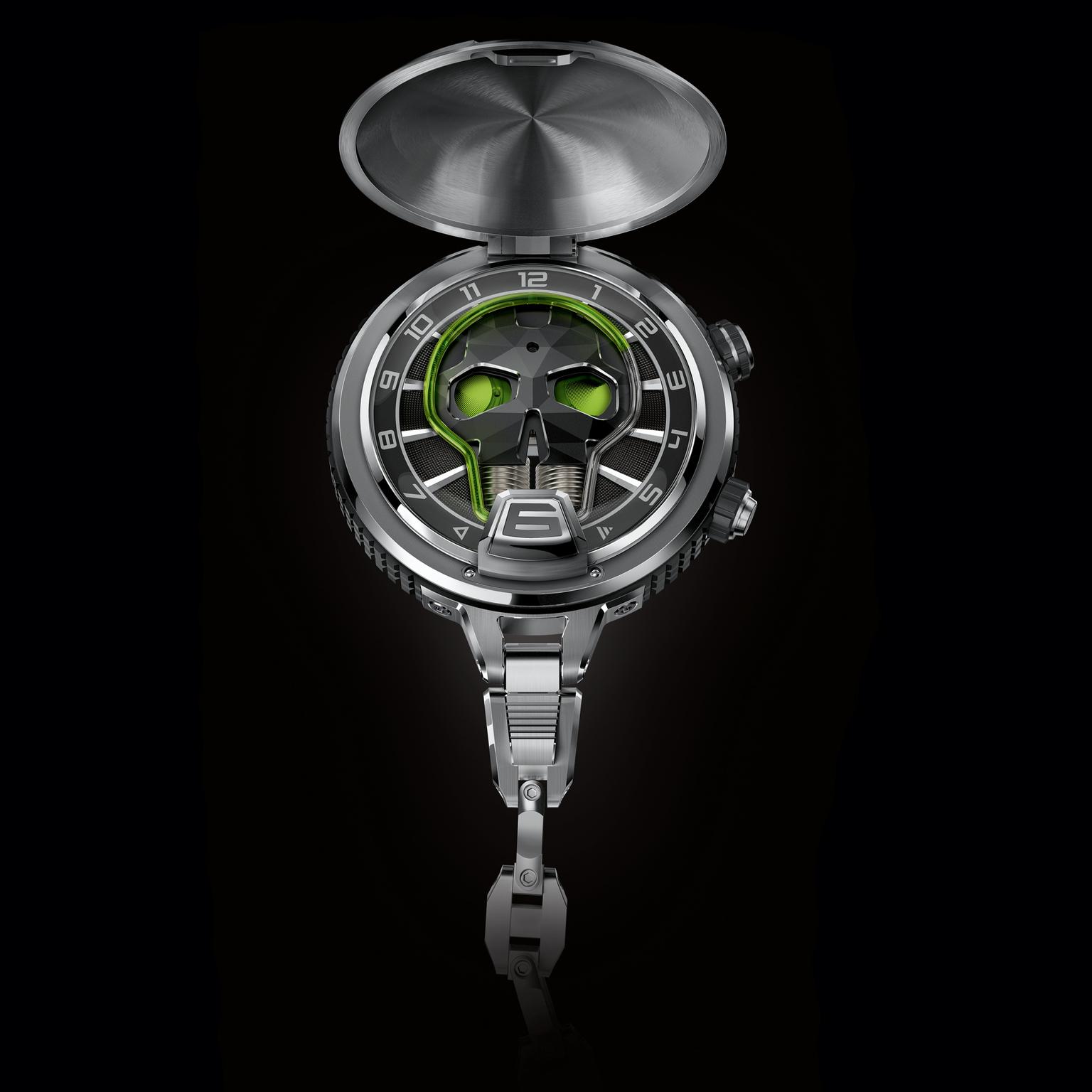 The Skull Pocket by HYT caused a stir at the SIHH salon this year with its ghoulish glowing skull spelling out hipster cool in big, bold letters.  While a handful of watch purists discovering the brand for the first time discarded the watch as a gimmick – entirely overlooking the fact that watchmakers of the past were the rabid trendsetters of their day – the truth is that this pocket watch is an exceptional showcase of hydro-mechanical technology applied to watchmaking, and exquisitely crafted to boot.

Time flows fluidly at HYT (Hydro Mechanical Horologists) – the young, independent Swiss brand that has made a name for itself thanks to its liquid representation of time. Instead of hands to indicate the passing hours and minutes, HYT watches use a fluorescent fluid that travels in a capillary glass tube propelled by an ingenious system of bellows.

Grégory Dourde, CEO of HYT,  gave me a live presentation of the Skull Pocket at the SIHH last week. “We are trying to reinterpret things from the past – like pocket watches – in a contemporary spirit,” he says, letting me hold the 59mm watch in my hand along with the chunky chain used to attach the watch to a vest. Surprisingly lightweight, the entire case and chain are crafted from titanium.

In another nod to traditional watchmaking, the protective cover of the pocket watch is embossed with Harrison leather and the dial is decorated with classic Clous de Paris, or hobnail motifs.

But that’s where tradition ends and the fun begins. By depressing the pusher at 6 o’clock, the cover gently opens to reveal a faceted skull with a thin green tube encircling its contours. The time is indicated via the fluorescent green liquid, which is pumped by the bellows positioned in the jaw of the skull.

“For us, a skull is not morbid at all. It is in the spirit of carpe diem, a reminder to enjoy the present,” comments Dourde on the choice of dial decoration. “The watch itself is alive, it’s in constant movement. The green liquid moves, and if you look closely into its eyes, you see that they are always moving – they are also alive!”

The eyes are all part of the timekeeping show – the left eye displays the seconds and the right eye features a power reserve indicator. “When the eye is black, the power reserve is full; when it’s yellow, the watch needs winding to restore its 65-hour power reserve,” explains Dourde.

“But, this is not all,” says Dourde, making sure I am not taking notes but watching as he repeatedly pushes the button crown at 4:30 on the side of the case and places the watch inside his jacket, away from the bright lights of the stand. A strange glow emanates from his chest and I notice that, in addition to the fluorescent green light from the skull, a soft blue light bathes the watch in a surreal aura.

To achieve this spectacular light show, HYT technicians positioned two LEDs under the skull and developed a micro-generator to charge the LEDs. The mechanical impulse is provided by the pusher on the case and converts the energy into electricity. No batteries and no electronic circuits are required to power the LEDs, and the assembly of the 82 components – required to create the micro-generator – caused the tech team multiple headaches because of the extreme miniaturisation and curved shape of the premises provided.

Limited to just 8 pieces and with a retail price of SFr. 115,000, most of the Skull Pocket watches had already been sold by the SIHH. But don't despair – HYT is in the bespoke trade as well and will be delighted to customise your fantasy, as long as you can envision flowing fluorescent fluid as part of the scenery. 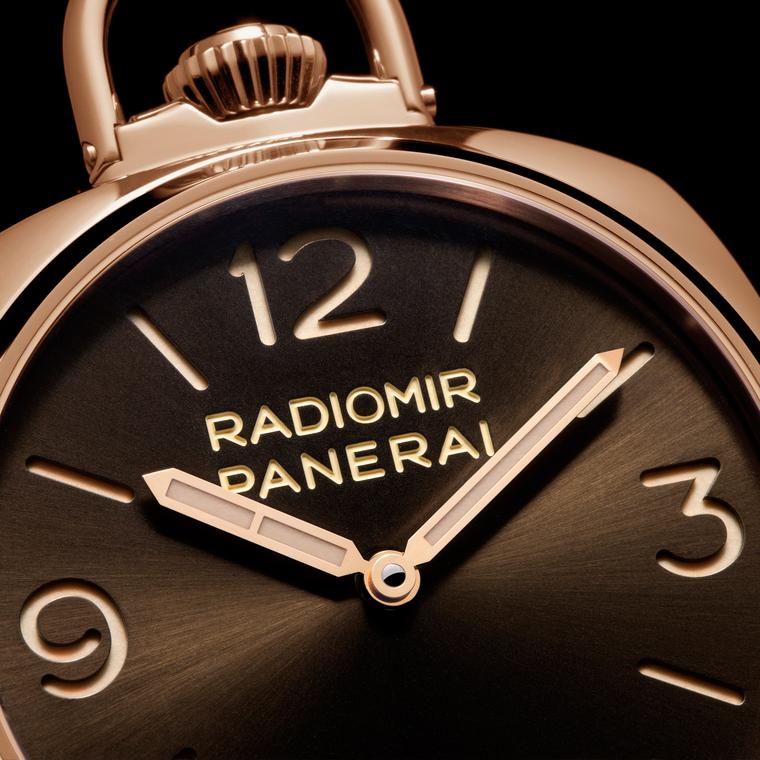 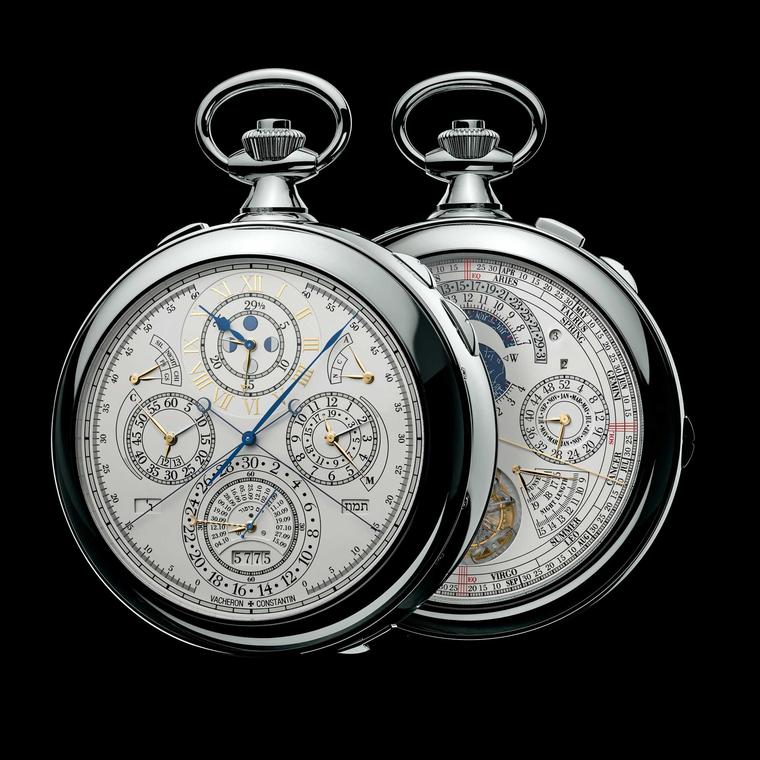