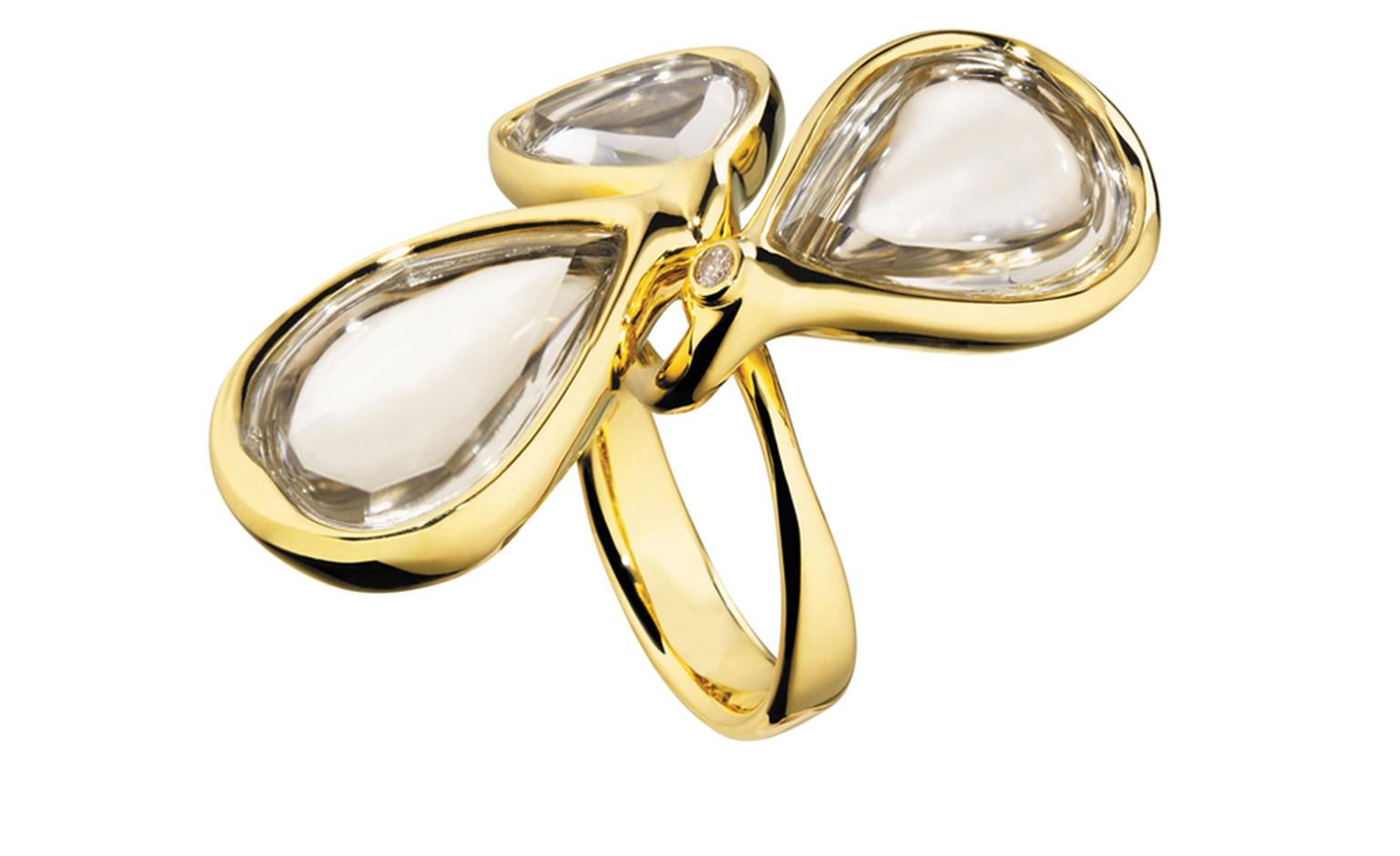 Diane von Furstenberg brings her strong sense of style to jewels created in association with H. Stern. Find out more about this new collection inspired by the rich jewellery tradition of the 18th century Moghul jewellers and ancient mysticism. H. Stern is working once again with the fashion designer Diane von Furstenberg and the result is a second collection of  eight new 'Sutras' jewels with flowing organic shapes. Von Furstenberg came to London to talk about her new collection and what inspires her to create these outsized jewels in yellow gold and crystal-clear stones. Like von Furstenberg's first jewellery collection with jeweller H. Stern, the look is all about the beauty and spiritual power of jewels. Sutras that means 'line that unites' in ancient Sanskrit are the rules at the heart of Eastern mysticism that guide the faithful to a higher level of consciousness. Von Furstenberg taps into the talismanic power of jewels and the ancient Eastern belief that gem stones had protective powers and channeled the power of the gods. Clean sweeps of highly polished gold wrap around soft-curving tear-drop crystals, a technique used by the Moghul jewellers of India.  The gold is so highly polished that it appears as smooth as liquid and asking to be caressed. "The way the stones are set makes you want to swim inside the stones," says von Furstenberg, who is in awe of H. Stern's prowess as craftsmen. Big, bold gold shapes contrast with small details. Each jewel is inscribed with what von Furstenberg calls "good words" such as 'love', 'honesty' or 'truth' that bring the wearer protection and confidence. A single little diamonds is set into gold, sparkling away amongst the large pools of rock crystal. Von Furstenberg explains that for her jewels should be like weapons: powerful and protecting. And so the big gold links of the Sutra bracelet or the outsized rock crystal stones both empower and shield the wearer from any evil that may be lurking in the shadows. Leaving aside the colourful gem stones for which H. Stern is known, the new collection only uses clear -as-water rock crystal for a pure look. Diane was wearing her Sutra gold earrings, an all-gold large link bracelet and a stack of smaller bracelets up her arm and the Sutras ring teamed with a loose grey chemise offset by her striking looks and mane of brown hair. Her jewels and fashion sit well together in a relaxed, chic way, the sign of a woman who is confident of her style and at ease with herself. The new arrivals were presented at Harrod's private By Appointment shopping suite on the top floor of the Knightsbridge emporium. Mannequins in von Furstenberg's latest soft silky dresses were draped in long gold 'Sutras' knot necklaces and chunky gold bracelets, showing how fashion and jewels are complementary for this legendary designer. The jewels are made in H. Stern's workshops in Brazil, where highly trained craftsmen and gemologists convert the most beautiful stones this land has to offer in world-class gems. H Stern has collaborated with designers such as von Furstenberg to bring another level of design and awareness to this luxury house.