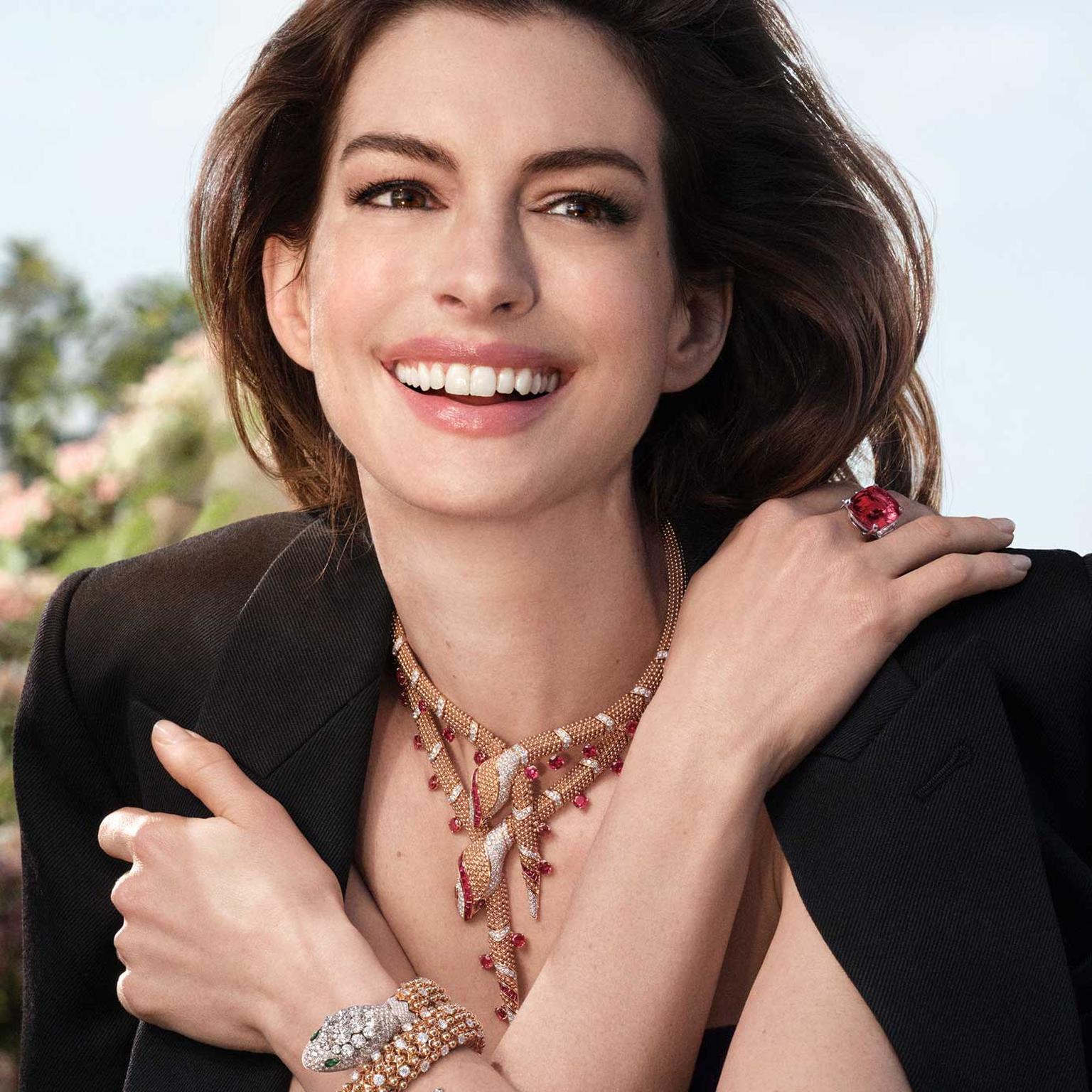 Bulgari chose the sumptuous Italian Embassy in Paris, a hôtel particulier built in 1732, to launch the 2022 Eden The Garden of Wonders  high jewellery collection. It was the perfect setting combining lush lawns, blossoming gardens and classically elegant high-ceilinged salons.

Bulgari's Eden The Garden of Wonders collection of 140 jewellery masterpieces was unveiled at the dinner where Carla Bruni sang wearing the spectacular emerald and diamond Tribute to Paris choker (below) and Anne Hathaway was draped in a flowing and tasselled diamond medallion necklace.

The collection is themed around the world of flowers and plants, but all with Bulgari’s breathtaking skill in breathing life and excitement into the most precious of jewels. Vivacious colour and an opulence of detail are at the heart of this collection divided into three themes with an emphasis on 30 emerald jewels. Bulgari is well known for its audacious use of gemstones and in particular emeralds and the brighter, the juicier and the bigger the stone, the better. This joyous use of colour is characteristic of Bulgari that is so closely associated with La Dolce Vita and the glamour of Rome in the 1950’s when the Italian film industry based around Cinecittà  was at its height. The style carried through into the 1960’s when the emerald continued to feature strongly in many Bulgari jewels.

Today it is much harder to source high quality, large sizes of precious gemstones than it was in the 1950's and 1960's but Bulgari has an uncanny ability to hunt down the rare examples still to be found. Between the firm’s gem vault that has been amassed over decades and the skill of Creative Director and stone sourcing guru Lucia Silvestri, Bulgari can pride itself on having one of the best assortments of colour gemstones in the world. And it certainly knows what to do with this abundance of mineral marvels.

The most stunning example is the Emerald Glory (above), a jewel as soft as lace that can be worn as a necklace, choker or tiara.  A lattice made up of 220 carats of diamonds forms the body of the piece that is adorned with 11 pear-shaped Colombian emeralds. It took Bulgari’s master jewellers over 3000 hours of work to bring this creation to life that is a mesmerising combination of ice cool diamonds and vivid green emeralds that glide smoothly over the skin.

Architectural and geometric, the Tribute to Paris necklace - as worn by Carla Bruni - features little Eiffel Tower motifs that like the city at night, shimmer around a 35.53-carat oval Colombian emerald. Playful and with a quirky story of its own, this necklace is a charming example of the ease with which Bulgari can weave together hugely precious gems. In a totally different style, the Emerald Venus necklace (below) is inspired by the Capelvenere, the Italian name for the Mediterranean fern whose name means hair of Venus. Twisting diamond branches set with emerald beads grow around a 20-carat Colombian octagonal-cut emerald. The art of this jewels is the harmony achieved between the symmetry of the emerald and the whimsical weaving and swaying of the branches. A spectacular matching watch with a mint green tourmaline over the dial completes this impressive set.

The Mediterranean Reverie necklace (below) is one of the most valuable jewels ever created by the Roman jeweller. A 107.15-carat cushion-cut Sri Lankan sapphire with intense yet translucent blue hues is suspended from a chain of made up of platinum links entirely set with baguette-cut sapphires and hundreds of diamonds. The effect captures the moment when in the Blue Grotto sea cave in Capri, your guide splashes his oar in the water and for an instant drops of water floating in the air shimmer like diamonds and the sea is a sapphire pool.

No Bulgari collection is complete without new incarnations of the snake and the Serpenti Ocean Treasure features two entwined serpents. The writhing diamond-set bodies sensuously wrap around the neck and their shared head holds  a 61.30-carat drop-shaped Sri Lankan sapphire. The exuberance of flowers in full bloom is crystallised in the magnificent Flowers of Eden necklace, that is a cornucopia of gem-set flowers. The vivaciousness  of the tourmalines, carnelians, amethysts and emeralds contrasts with the opacity of the mother of pearl leaves. Like a bouquet bursting with life,  the Flowers of Eden necklace captures the  joyful spontaneity of nature, a task that took 1,500 hours of meticulous labour.

The Garden of Eden collection also features five exceptional watches, each an exquisite example of this rare art and a field in which Bulgari is taking a pole position. The Giardinno dell’Eden Tourbillon cuff (above) watch perfectly mimics a Mediterranean garden complete with two quivering electric blue opal butterfly and lush blossoming flowers. All this was achieved using 6,500 gemstones with a total weight of 223 carats including Paraiba tourmalines, emeralds, garnets, tourmalines, opals, rubies sapphires and diamonds. The back section of the cuff can be detached to be worn as brooch and the movement is powered by a sophisticated caliber featuring a tourbillon. Bulgari’s new miniature Piccolissimo mechanical movement is tucked away in the Giardinno dell’Eden Piccolissimo watch that explodes with a riot of flowers with a Sixties psychedelic feel in hot pink, red and yellow tones. The collection reflects Bulgari's commitment to raising the bar of creativity and craftsmanship in both high jewellery and high watchmaking, all with characteristic Italian flair and a love of colour and a dash of humour. 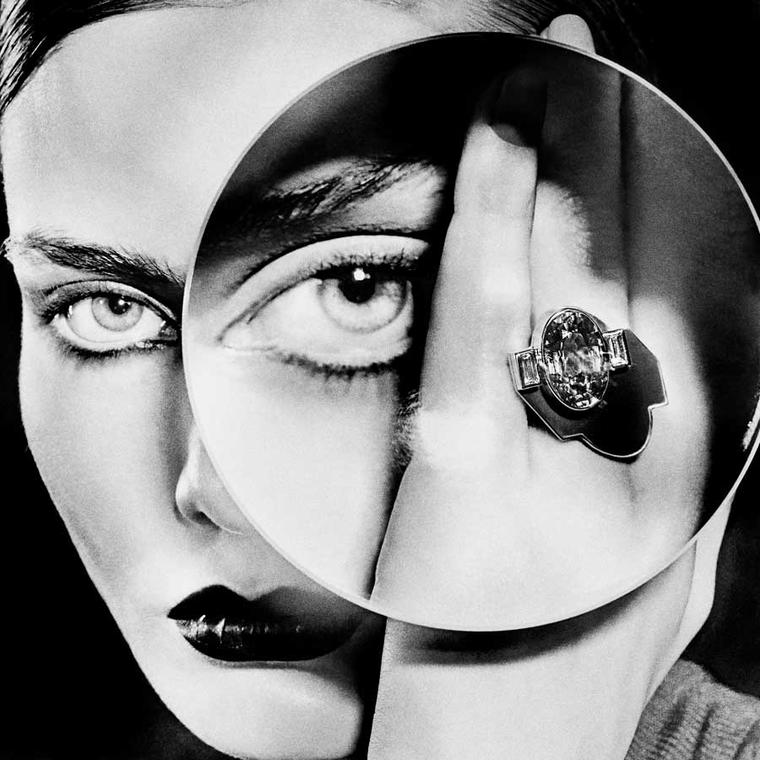 Don’t look back: the way ahead for high jewellery