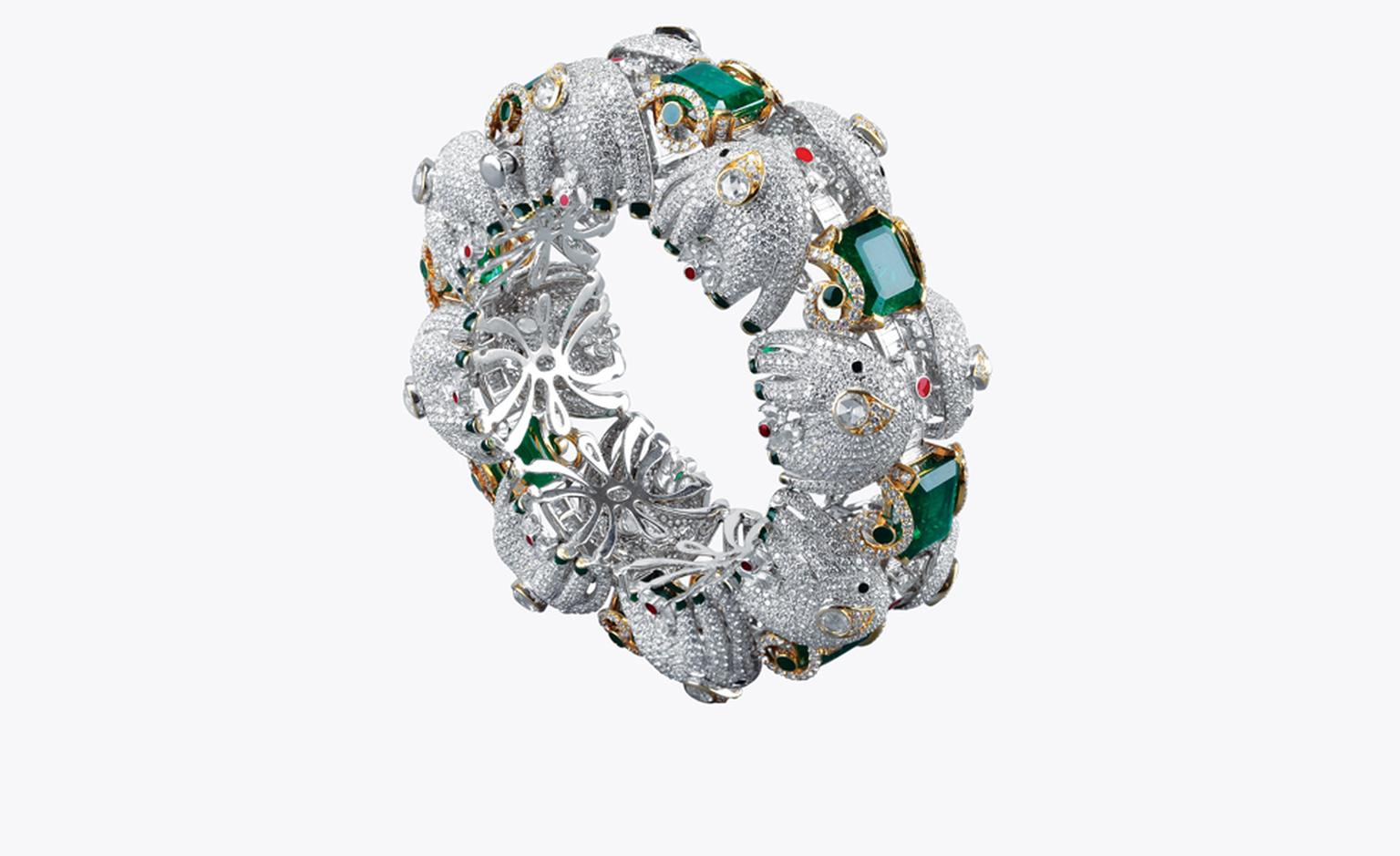 On 14 October Sotheby's auctioned the second collection of Zambian emerald jewels called "Emeralds for Elephants" to raise funds for the Wildlife Trust of India to help their work protecting vital elephant corridors. The total for the sale was $750,000 of which $150,000 goes to the WTF. Following the success of the 2010 "Emeralds for Elephants" auction held in London, this year the World Land Trust migrated to India where new extravagant jewels using Gemfields stones were sold at the Mumbai Taj Mahal hotel. The aim of this collection is to create awareness and raise crucial funds for the conservation initiatives of Wildlife Trust of India (WTI) for the Asian Elephant in India. The star of the collection is a Ganesha sculpture with a 638 carat Gemfields Zambian emerald created by artist Arzan Khambatta. And all the jewels feature elephants or some part of this distinctive pachyderm - quite a feat. The World Land Trust and ethical coloured gemstones mining company, Gemfields, together with Jaguar Land Rover and the Gemological Institute of America (GIA India), have collaborated with ten of India's top jewellery designers to create a unique 'pop up' collection of bespoke Zambian emerald jewellery. The Asian elephant is in danger of losing its habitat as India's farmlands and cities expand and India is home to 60% of the world's Asian Elephant population, making their survival in India critical to the survival of the whole species. An extensive survey across India conducted by WTI resulted in identifying 88 vital corridors for elephant movement. The Wildlife Trust of India with its conservation partners subsequently set about securing these vital corridors, of which the World Land Trust has partnered with WTI in the northern Indian state of Uttarakhand, southern Indian state of Kerala and the north eastern state of Meghalaya. Securing corridors for elephants involves working closely with local communities and governments. WTI and its conservation partner WLT aim to facilitate the creation of conflict-free corridors and improve conservation prospects of the Asian elephant. Gemfields has chosen ten leading jewellers from around India to create a one-of-a-kind piece or set of jewellery using Zambian emeralds. Gemfields' focus is on ethically produced Zambian emeralds that follow fair-trade, environment, social and safety best practices. The Company's unique mine-to-market capability guarantees the provenance of every gem through a full disclosure and certification programme. The deep green of these gems and the ethical nature of their mining and route to market, form a perfect fit with the World Land Trust's goals and objectives. Each designer has created a unique piece /set inspired by the elephants themselves and the corridors that are home to an abundant biodiversity of flora and fauna. The jewellers are just as diverse in their style and designs; Abaran Jewellers (Bangalore), Anmol Jewellers (Mumbai), Gem Palace (Jaipur), Khanna Jewellers (New Delhi), Meena Jewellers(Hyderabad), Narayan Jewellers (Baroda), Nirav Modi (Mumbai), Sawansukha Jewellers (Kolkata), Talwarsons Jewellers (Chandigarh) and Vummidi Bangaru Jewellers (Chennai). The partnership between World Land Trust and Gemfields is an on-going one and both organisations have long-term aims for their work together.