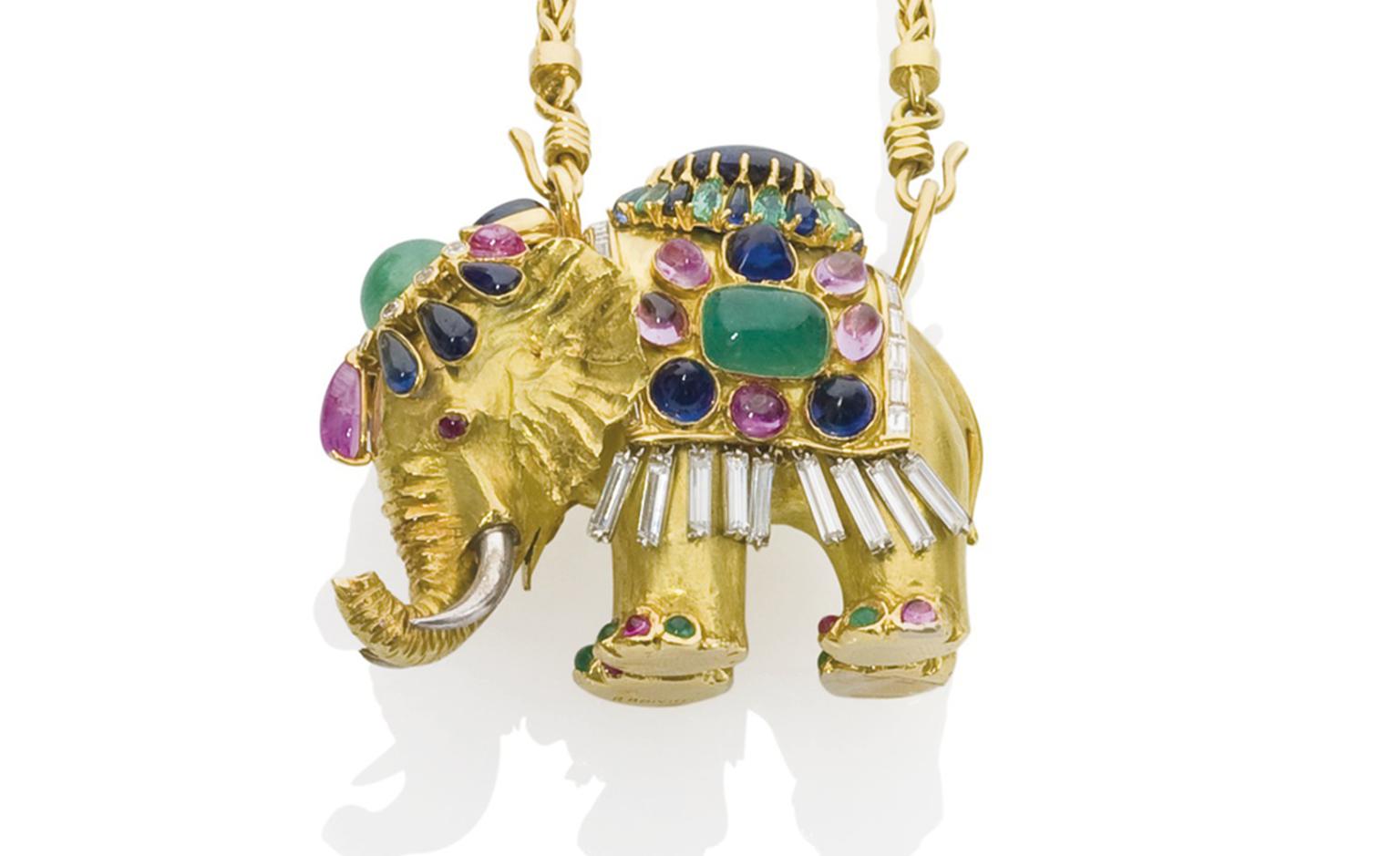 One item in particular attracted our attention at Christies Paris Bijoux  Sale May 23. It's a little golden pachyderm with bejewelled toes by Rene Boivin. ChristiesParis Bijoux Sale May 23 will offer a range of deligths but this little pendant is the one that stands out for us.Numbered Lot 232 andestimated between €20,000-€30,000 (SOLD FOR €109,000)  it is a lovely gold elephant pendant by Rene Boivin, decorated with sapphires, emeralds and diamonds. This elephant has fabulous pink sapphire eyes. His toes are pink sapphires and emeralds and he has a jeweled headdress and a rug that is encrusted with varied sizes of cabochon, marquise and round emeralds, diamonds, blue and pink sapphires. Baguette diamonds represent the swaying tassels on the rug. Although this is signed 'R. Boivin 1960', this piece would not actually have been made by the man himself, but by the jewellery house that proceeded his name. Jules Rene Boivin was born in 1864 but died in 1917. He was passionate about jewellery and from a young age became incredibly skilled in engraving and designing after being an apprentice goldsmith in his brother's business. In the 1890's he began the firm 'Rene Boivin' and established himself in Rue de St Anastase. In the firm's early years, Boivin created beautiful  floral, garland and Art Nouveau style jewel. In 1917 Jules Rene Boivin died prematurely so his wife Jeanne took on the company, with Suzanne Belperron joining in 1921. The firm continued to be a family business with Boivin's daughters joining in 1933 and producing some very avant-garde work in the 40's and 50's. Nothing was typical of the house of Boivin, its jewels always stood out from the crowd in originality. A distinct characteristic of their pieces is varied textures alongside the integration of precious and semi precious stones with unusual materials. By keeping their followers intrigued, constant innovation in design resulted in sustained success over the decades. An example that demonstrate this originality is the fact that Jeanne was possibly the first jeweller to use combinations such as wood, sandalwood, ebony, gold and coral in a piece of jewellery. 1960 was a period when jewellery houses such as Cartier and Van Cleef & Arpels were creating whimsical animal brooches and jewels. However this is not the stylized 60's spiky, textured look, and shows Boivin's initiative. The elephant could be reminiscent of the hippy movement of this decade and the influence from India on fashion and jewellery. The fact that it is something that stands out from this period could suggest it was a commission.