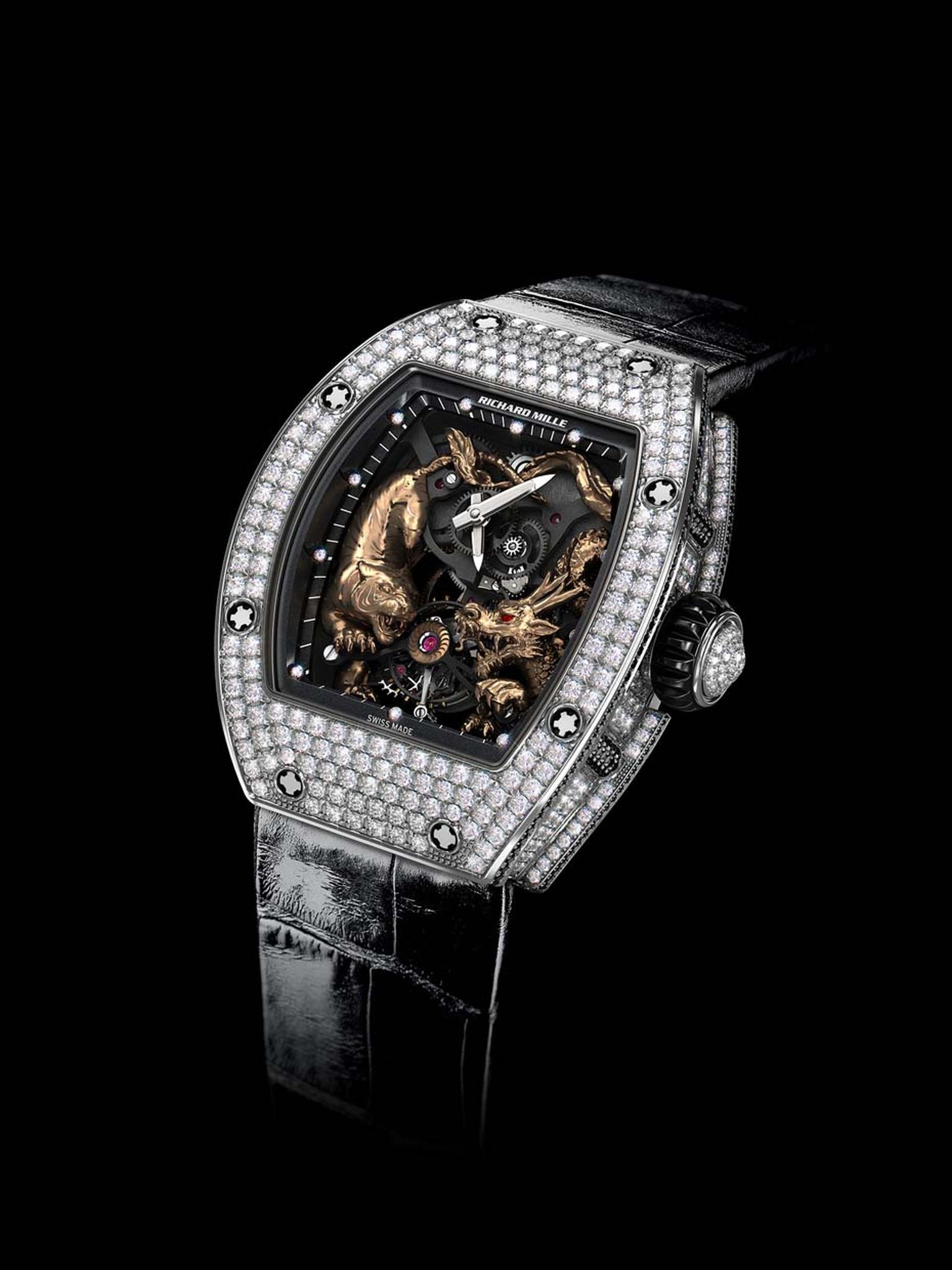 If machines for the wrist, Formula 1 racing technology, cutting-edge micro-mechanics and avant-garde materials don't sound like the ideal ingredients for a woman's watch, then Richard Mille may well change your mind.

This year the daring, young Swiss watch brand, named after its founder Richard Mille, has made an unprecedented commitment to women by offering a wider and more enticing range of watches for the female wrist. In fact, the brand has gone a step further and declared 2014 the 'Year of the Woman', with four of the 10 new watches it presented at the Salon International de Haute Horlogerie (or SIHH) designed for the fairer sex.

But this is no exercise is merely prettying up a watch with diamonds. All the new women's watches feature the trademark ultra-light, high-performance technology and materials that have made this brand stand out from the rest.

And the results are as surprising and exciting as you would expect from this renegade house with a penchant for nanofibres, mind-boggling mechanics and a big statement on the wrist. The watch that immediately caught my eye was the elaborate Tourbillon RM 51-01, also known as the 'Tiger and Dragon Michelle Yeoh'. The watch continues Richard Mille's collaboration with the Malaysian actress Michelle Yeoh and celebrates the release of her latest film, 'Crouching Tiger, Hidden Dragon II', in which she plays the sword-wielding Yu Shu Lien.

As its name suggests, a sharp-clawed, teeth-baring tiger fights for dominance on the dial with a snarling red-eyed dragon. The exquisitely hand-carved animals look ready to pounce into combat, their golden bodies and tails snaking through the mechanics of the movement as they meet eye to eye over the tourbillon regulator. Each animal is meticulously hand-painted, and on the back of the watch, through the glass case-back, you can even see the tiger's paw pushing through the cogs and wheels of the movement.

You can't deny that this is an original-looking dial, and it goes without saying that the mechanics show a rare mastery of refinement and daring. The watch has a 48-hour power reserve, and the movement is executed in grade 5 titanium. A torque-limiting system in the crown protects the movement from accidentally being over-wound. Only 20 pieces will be in made in white or red gold making this one for the collectors.

Another watch that is bound to draw gasps is the Tourbillon Natalie Portman RM19-01. Embracing a slightly spooky theme, the movement features a diamond-set spider that spreads his tapered legs across the dial while his abdomen holds the tourbillon cage. On the back of the watch, a cobweb set with glistening black sapphires is draped across the movement. This is the first watch created by Richard Mille in collaboration with the award-winning American actress, who has been a partner of the brand since 2011. Natalie Portman supports various charities, including the Foundation for International Community Assistance (FINCA), a non-profit organisation offering solutions for micro-credit in developing countries, and Free the Children, a charity defending the rights of children worldwide.

But why the spider? I hadn't really associated the star of Black Swan with an arachnid, but apparently Portman set her mind on finding a strong symbol with complex undertones. In mythology, the spider is associated with feminine energy and creativity as well as being a symbol of the soul and freedom. Whatever your thoughts on these creepy crawlies, the watch rises above any preconceptions, and the stylised outline of the creature, shimmering with diamonds, is beautiful and alluring. The spider is in fact part of the movement. Its abdomen supports the tourbillon bridges, while its legs form the bridges of the two winding barrels. Look out for this striking watch, which conveys Natalie Portman's very personal take on luxury, as she travels the world making high-profile appearances wearing it on her wrist. Again, only 20 of these watches will be made.

Less elaborately decorated are the two versions of the RM07-01 in either white or warm-brown ceramic, which Richard Mille describe as a 'tough love' approach to horology. Showing full commitment to making beautiful but top-of-the-range mechanical watches for women, the RM07-01 boasts a brand-new automatic winding movement known as the CRMA2 with a sophisticated variable-inertia balance.

The delicate and perfectly executed equilibrium between performance and aesthetics makes this one of the most exciting new women's watches of the year. I particularly like the contrast of the red gold band on the side of the case combined with the sweeping curves of the scratchproof TZP ceramic in a warm-brown hue that is smooth and soft to the touch, making this the perfect companion for the woman who demands as much of herself as her watch.

The RM 037 is a new interpretation for women of an existing watch. I like the clean and elegant diamond-set dial as well as the brand new red gold bracelet, which takes this classic and elegant watch to a whole new level of luxury. And you can choose different stones such as onyx, pearl or jasper to decorate the central lozenge of the dial.

So however much you may have thought that Richard Mille was for men with deep pockets and a love of all things technical, the brand is now looking more feminine and sexy than ever. And that, I am sure, will appeal to women who want a truly different watch with its very own take on what an ultra-valuable watch should look like.

PREVIOUS ARTICLE Ray of sunshine: nine of the best yellow diamond engagement rings NEXT ARTICLE Jaeger-LeCoultre watches for women: a Christmas Rendez-Vous with a master of timeless designs