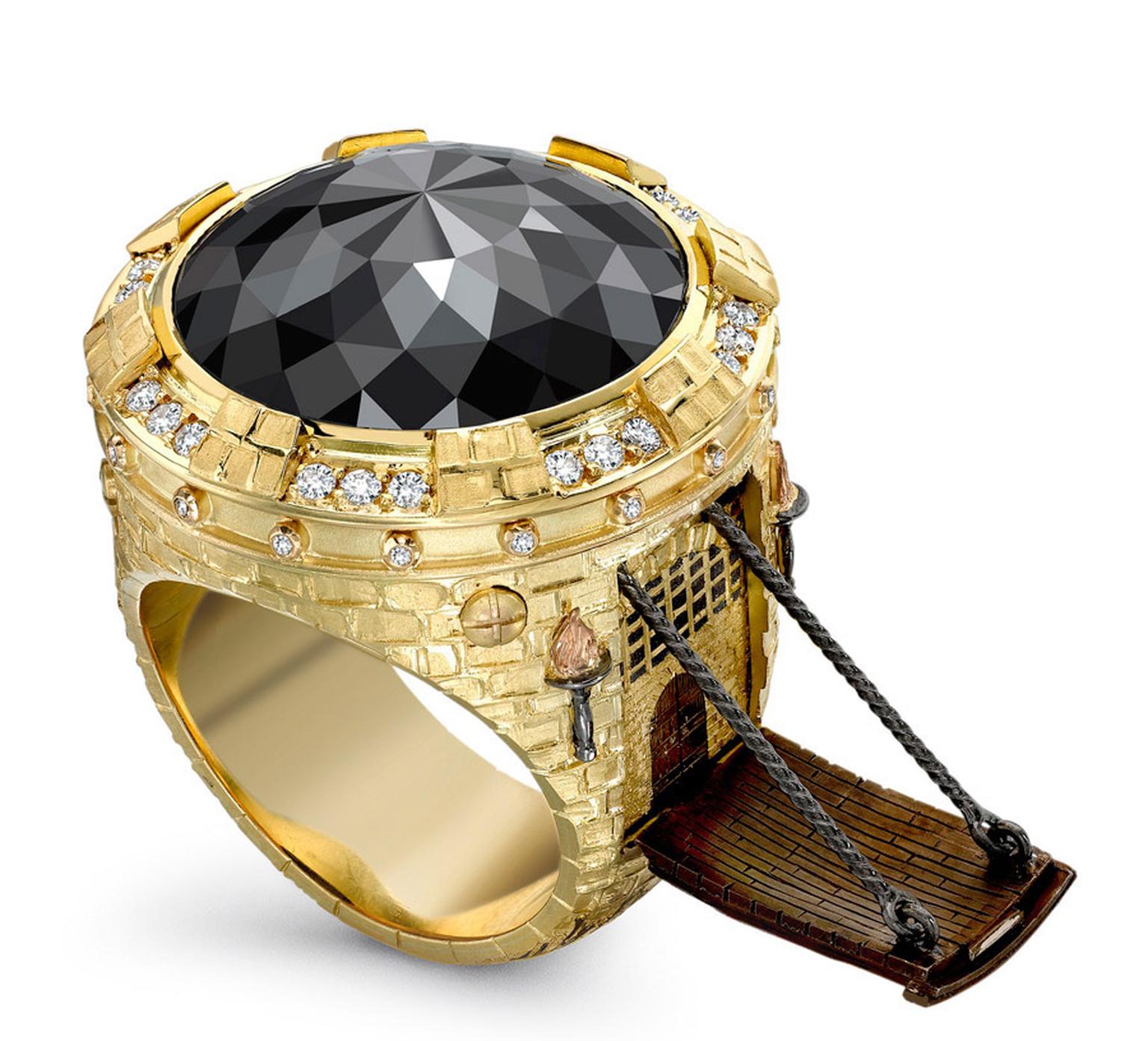 This year's Masterpiece London fair promises to be the best yet, and after two years of providing visitors with a veritable treasure trove of antiquities, relics and modern wonders, that will be no mean feat. Looking at art and design from antiquity to present day, the fair offers you a chance to get up close with a vast array of paragons of perfection, be they Degas or diamonds, mirrors or miniatures, or in my case, jewellery. Here I've selected a few potential standouts, and it's clear to see at first glance that these are very special pieces indeed, with design, workmanship, and minutiae of detail shining out of each and every one.

The first designer to create opening door rings, Theo Fennell's Castle Ring is a piece of jewellery that one can literally get lost in. As Fennell himself espouses, this takes us "away from mass-produced offerings that are available anywhere in the world. This is truly special", and with details as playful as the opening drawbridge with its very own chain mechanism, it's hard to argue. The ring has been handcrafted in yellow gold holding a 23.88ct black diamond. It sits perfectly next to his other piece, the Cleopatra Brooch, which boasts tsavorites, emeralds, rubies, diamonds, and a moonstone skull with her hair in black spinel. It also boasts a scarab carved from tektite, molten glass said to have formed from meteorites heating and breaking up as they entered our atmosphere.

Symbolic & Chase seem to also delight in colourful pieces with delicious details. Firstly there's an articulated yellow gold serpent with enamel motifs and a pearl-accented head, with a ruby eye. Made in 1840, this Swiss masterpiece opens to reveal a gold vinaigrette compartment, and can be worn either as a necklace or wound around the wrist with head in hand. Symbolic & Chase also have a late 1920s French gem-set platinum parrot brooch, with calibré-cut buff-top sapphires, rubies and emeralds, while the little chap sits atop a baguette-cut diamond-set perch.

Hancocks have a vibrantly coloured and aptly named Tutti Frutti bracelet from Cartier; this would have been part of the Tutti Frutti jewels, exuberant pieces that consisted of coloured gems carved into leafy shapes, combined with cabochons and smooth or ribbed beads. The gems themselves originally came from India and became something a hallmark for Cartier during the 1920s. What's so incredible is how much this bracelet mirrors the Giuliano Bracelet also at Masterpiece London this year, a rare archaeological revival-style bracelet from the 1880s.

Again, detail is delicious with so much of the jewellery here, and the Verdura Heart on display is testament to this; the hearts became something of a trend in 1940s Hollywood and although Verdura was influenced by baroque Sacred Heart imagery, his designs are closer to the courtly heart jewels that were highly prized in Elizabethan England. Also from the same era is the Ford Bracelet featuring five delightful gold and enamel charms by O.C. Tanner and Co., all on a Tiffany gold chain. Each charm is marked with the specific model, date of manufacture, and quantity made.

Masterpiece London 2012 takes place from the 28th June until 4th July at the South Grounds of the Royal Hospital Chelsea. Tickets range start at £20, with booking and more information available here.