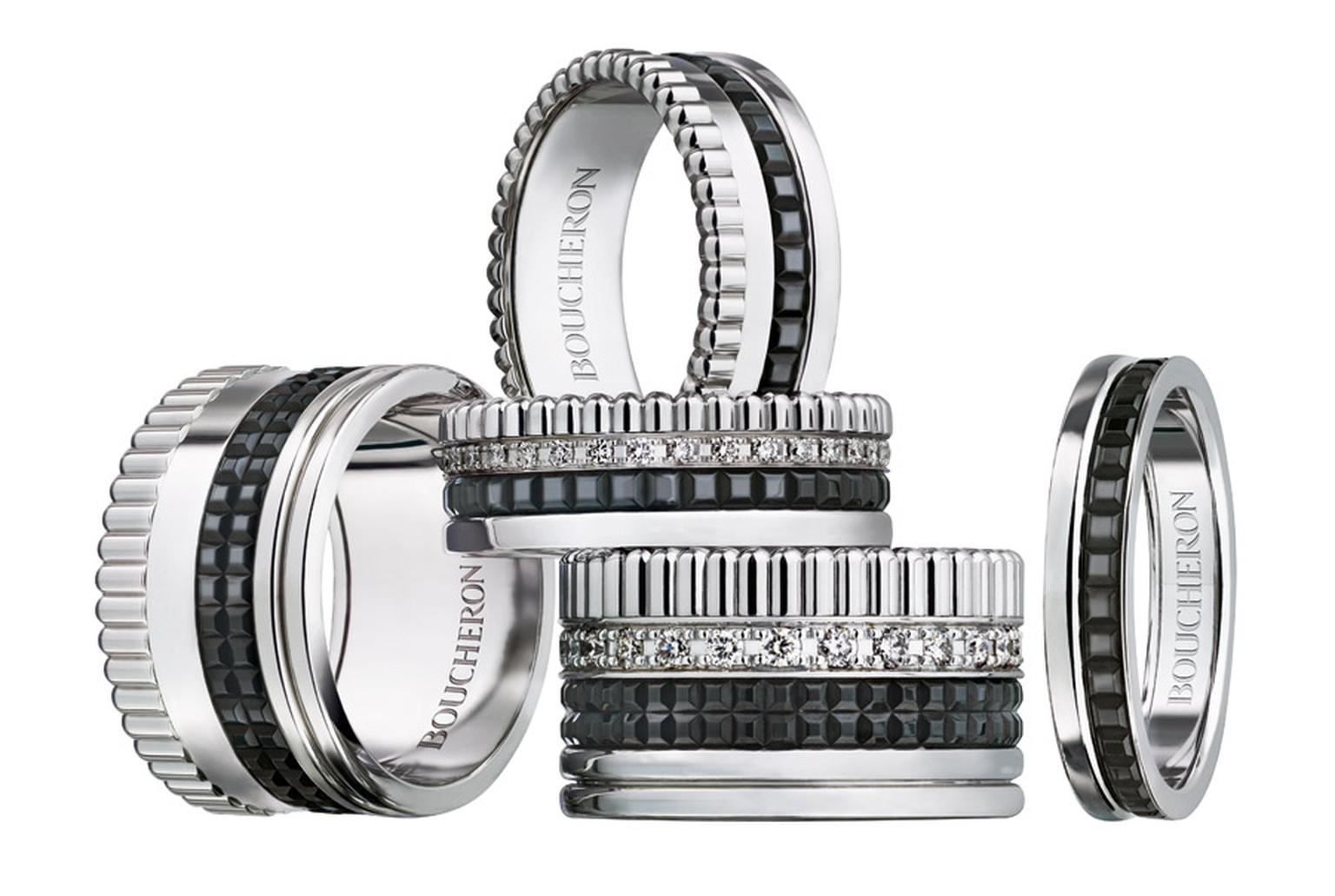 The Quatre collection from Boucheron just got cooler with the entrance of the Quatre 'Black Edition', a new version of the famous four stacked rings that now feature the sleek and enigmatic 'black' Boucheron gold, an alloy created to offer a darker shade of this precious metal.

The Quatre collection pays homage to the architecture of Paris and picks up on patterns you would see on a stroll around the city. Perhaps it is a glimpse of light bouncing off the Seine, a rain slicked cobblestone, a detail of stonework on the side of one of the capital's grandiose buildings or the velvet darkness of a city park at night. The ribbed 'gadroon' forms refer to architectural details found in steel structures such as the Grand Palais or the Eiffel Tower, testaments of the age of industry that punctuate the Parisian skyline. Abstract yet precise, the ring allows you to see many different facets of Paris in its four geometrical patterns.

Launched in 2004, the brave new design with an unforgivingly bold and stark look lines up four gold bands: one in yellow gold, followed by white then pink and Boucheron's warmly-hued 'chocolate' gold. Almost masculine in its emphatic forms, repeated patterns and rigid lines, it has become a favourite with the fashion-forward. On the finger of a woman, the Quatre is edgy and sexy and a touch defiant; a look Boucheron describe as 'rockn'roll attitude á la française.' So it is no wonder that these audicious forms have caught the eye of some of the most fashionable women including the demi-godess of mode, Carine Roitfeld, ex-editor of Vogue France.

The contrast of the colours of gold combined with the intriguing shapes, angles and curves of the metal plays with light creating an effect that even without diamonds, sends out flashes of light. The cunning juxtaposition of hard with smooth, silky with ribbed, vertical with horizontal, inverted with curved and dark with light creates an intriguing rhythm of patterns that is further enhanced by the arrival of the strong contrast of black against white gold.

The first band of ribbed, rounded highly polished tubular forms set in a tight pattern is known as a 'gros grain' motif, an architectural term that refers to a band of convex molding carved with ornamental beading or reeding. Next is a line of diamonds set flush into the white gold followed by what I think is the most dramatic pattern, the 'clous de Paris'. The facetted 'black' gold flat-top pyramids are tightly packed creating a sequence of angles that shows off the skill of the jewellers at Boucheron. The effect is finished off with two smooth gadroon, sweeps of highly-polished curved white gold that imitate silk cord with their high sheen.

The test of a great jewellery design is to create a striking jewel without relying on the fireworks of brightly coloured stones or the distraction of elaborate patterns. The Quatre is a prime example of great design prowess that stands out even without the discreet row of diamonds. To complete the story, the workmanship of the Quatre rings, like all Boucheron jewels is second to none and stands up to the closest scrutiny. And like Paris, its appeal is timeless and everyone sees something different in its angles, curves and facets.