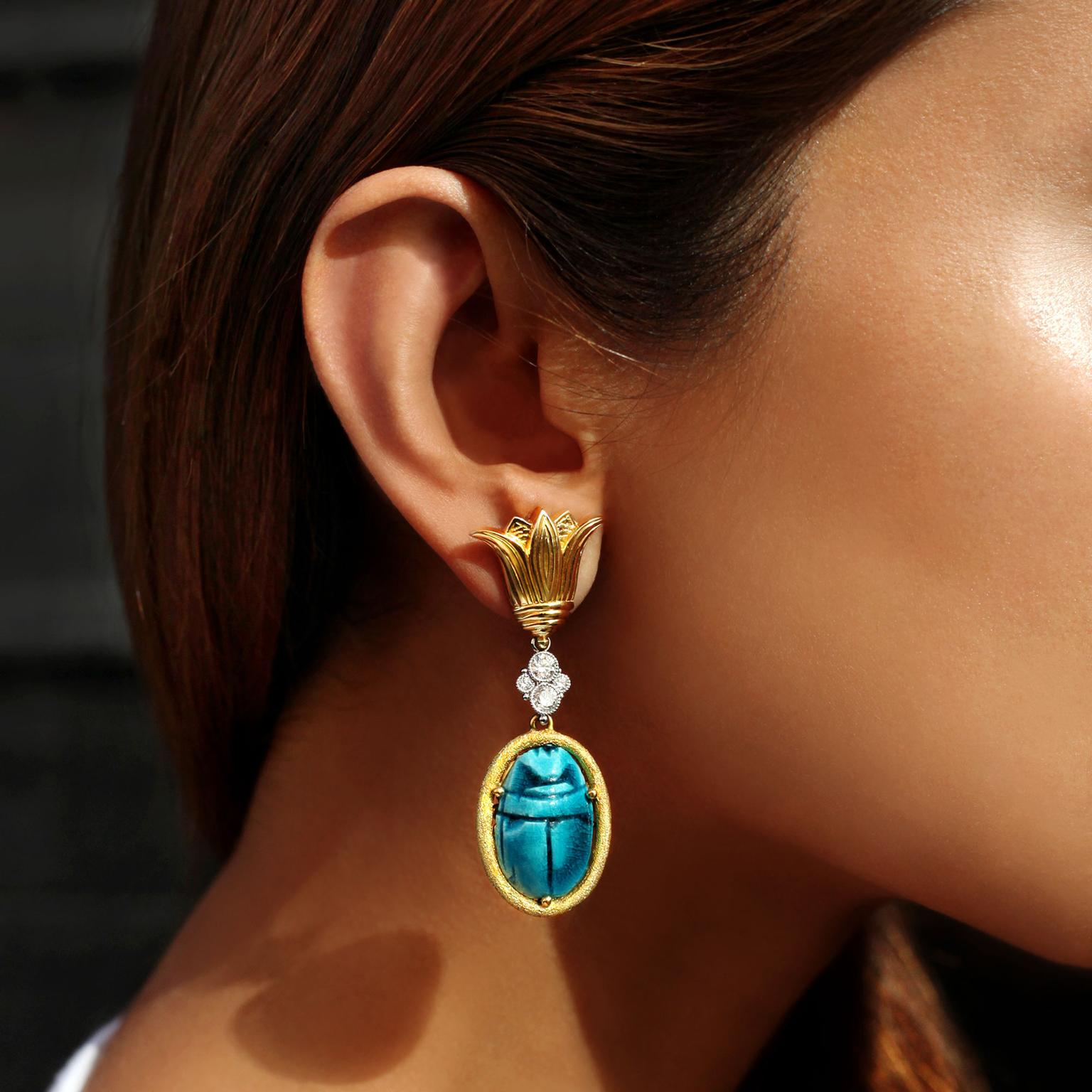 An Ancient Egyptian symbol for good luck, the scarab beetle is brought to life in one of this season’s most covetable jewellery trends.

I’m the first to admit that if a real-life beetle scuttles across the kitchen floor, I’m most likely to take refuge on top of a chair, probably yelling for my husband to remove the offending beast without delay. Luckily my squeamishness about insects doesn’t extend to the bejewelled versions, as it would be a huge shame to miss out on this season’s scarab jewellery trend. Massive credit goes to the jewellery designers who have incorporated the scarab beetle into earrings, necklaces and bracelets, which make the heart flutter, not with fear, but with desire.

Bibi van der Velden is renowned for her use of real, untreated scarab wings in pieces such as this open bangle that also features a Tahitian pearl to balance the bright colours of the scarab wings. Bibi says: “I really love the material from the scarab pieces. The iridescent colour of the wings is so unbelievably beautiful and all-natural, you can’t get the same effect with enamel. The scarabs are eaten as a delicacy in Thailand and the wings are a waste material, which completely ties in with the recycle element of my work.”

The Scarab jewellery collection by Bibi van der Velden has proven very popular with customers due to the eye-catching colours and the fact that each piece is completely unique. “The most popular item is the bracelet with the scarab and Tahitian pearl because it's an easy-to-wear bangle with very beautiful and colourful materials,” says Bibi.

They may be on-trend for spring/summer 2016, but scarab jewellery has a long history that spans as far back as 2,000BC. Amulets in the form of scarab beetles were very popular in Ancient Egypt from 2,000BC onwards; soldiers often wore scarab beetles into battle as the insects were thought to have supernatural powers of protection against enemies. Scarab jewels were also carved from stones or moulded from Egyptian faience - a ceramic developed more than 6,000 years ago - before being glazed blue or green. The scarabs were often engraved, initially with the names of pharaohs, royals and other titled officials, and later with the names of Gods and short prayers or mottos.

Based in New York, former antique auctioneer Deirdre Featherstone has been creating jewellery with a story to tell for her label Featherstone Design for more than 30 years. With a penchant for Ancient Egyptian culture, her new collection combines the scarab motif with hammered yellow gold and raw, natural gemstones in pieces that encapsulate the seemingly paradoxical concept of “modern antiquity”.

Brazilian jewellery designer Silvia Furmanovich is also inspired by Ancient Egyptian iconography where the scarab symbolised rebirth and brought the wearer good fortune. The muted tones of these elegant grey agate and diamond scarab earrings make them extremely versatile and easy to wear.

The Scarab range of Carolina Bucci jewellery celebrates the shell of the insect as an ancient symbol of strength and vitality. Cute and luxurious in equal measure, a chubby yellow gold scarab sits on top of a ring, its rounded shell glistening with diamonds and coloured gemstones.

Working from her Paris studio, Aurelie Bidermann creates exquisite gems with a fun twist inspired by the eclectic contents of her grandmother’s jewellery box. This season you can embrace two jewellery trends at once by wearing Aurelie’s single earring featuring a scarab on the verge of unfurling its sapphire wings.

An avid collector of antique gems, Sylva Yepremian - the Los Angeles-based designer behind Sylva & Cie jewellery - regularly looks to the past for inspiration for her unique pieces. A pleasingly chunky scarab cuff crafted from gold and set with three turquoise scarabs also reflects Sylva’s love for distressed patinas and asymmetrically faceted stones.

This latest jewellery trend has brought the scarab firmly into the 21st century, but if these precious beetles can attract good luck and bring protective powers as well as admiring looks, then I’m all for it.

PREVIOUS ARTICLE Our favourite jewellery trends from Baselworld: part 1 NEXT ARTICLE Your wish is DeLaneau’s command 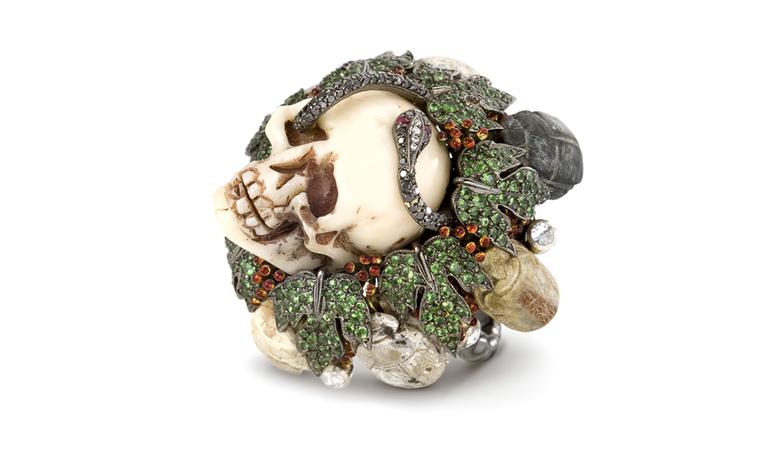 Jewels from the dark side 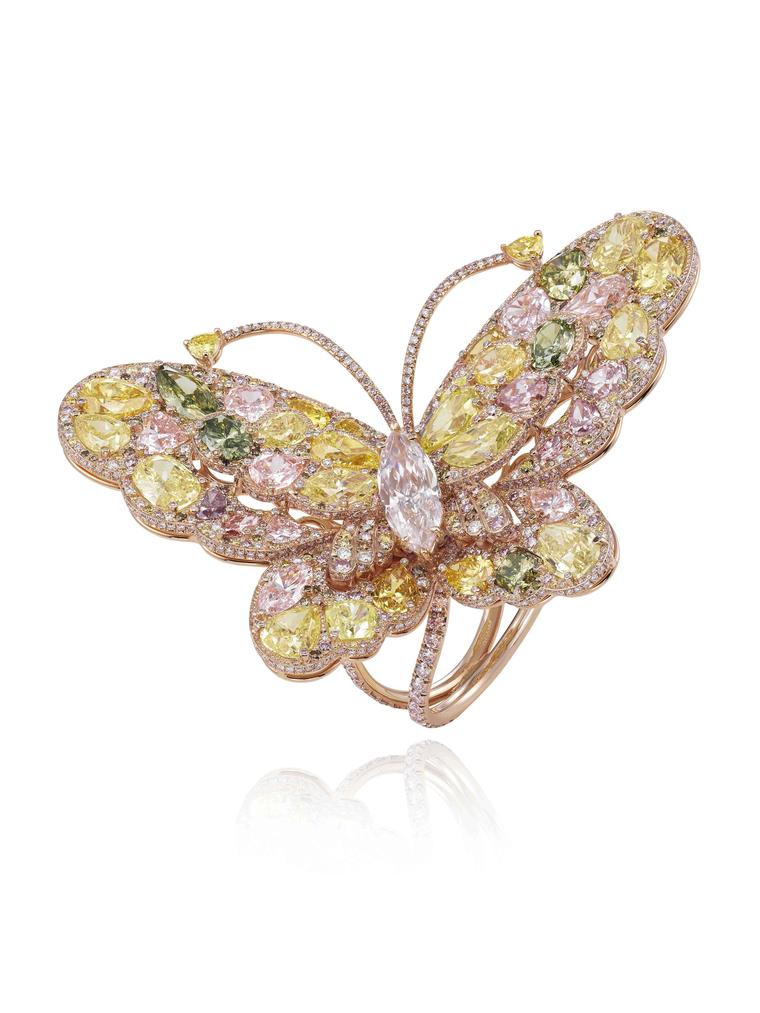 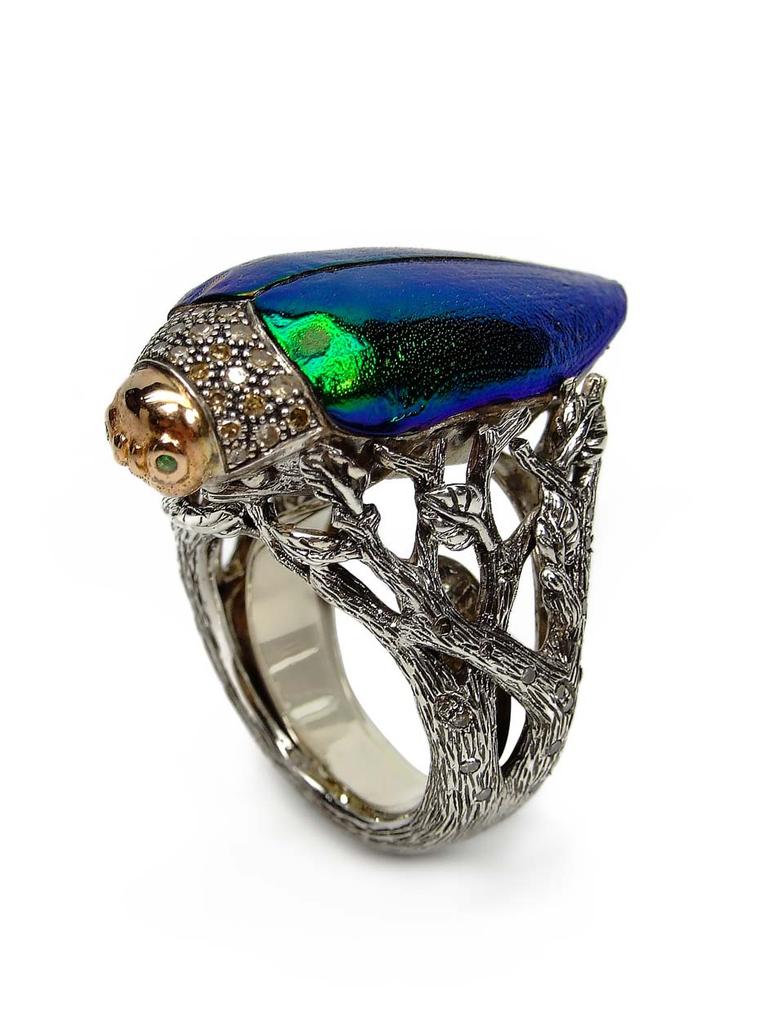