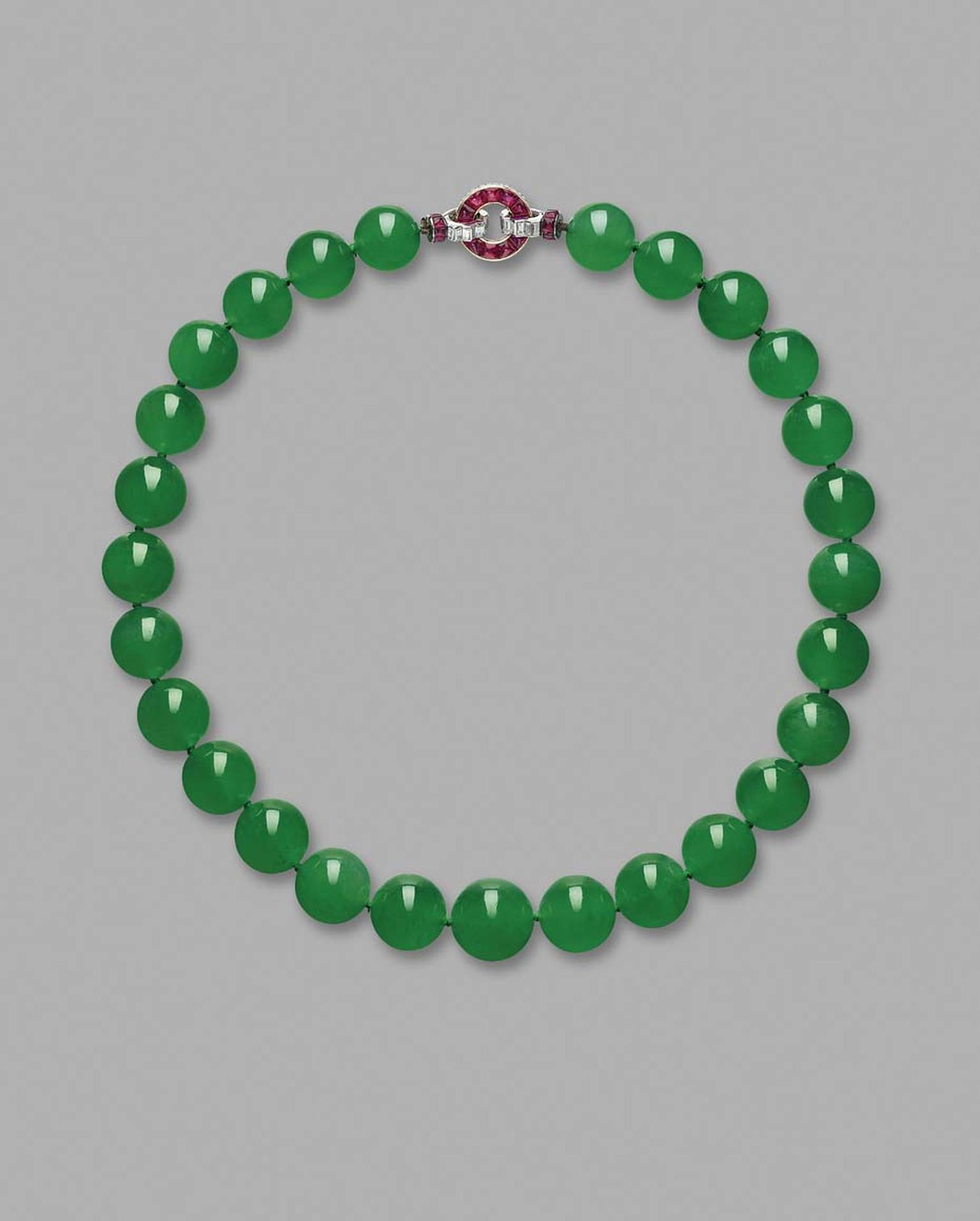 Sotheby's Hong Kong has today announced the sale of The Hutton-Mdivani necklace, the top lot in its Magnificent Jewels and Jadeite Spring Sale on 3-6 April 2014. The greatest jadeite bead necklace in the world, it is of exceptional historical importance, both for its illustrious provenance and the quality and size of the jadeite beads.

Made up of 27 Qing jadeite beads reputedly from the Imperial Court, The Hutton-Mdivani necklace is formerly the property of socialite and Woolworth heiress Barbara Hutton, one of the wealthiest women of the 20th century and an enthusiastic collector of exceptional jewellery by celebrated designers, as well as important and historic jewels.

The exact date the necklace came into the Hutton family's possession is unknown, but in 1933 Cartier was commissioned by Barbara's father to add an innovative clasp to the necklace. Shortly afterwards, it was presented to Barbara by her father as a wedding gift on the occasion of her marriage to Prince Mdivani and she was photographed wearing it to the Metropolitan Opera House in New York.

Comprising 27 gigantic, vivid green jadeite beads, all of which are of excellent translucency and extremely fine texture, with diameters ranging from 19.2mm to 15.4mm, The Hutton-Mdivani necklace is expected to fetch in excess of HK$100 million (US$12.8 million). The necklace will be showcased in a travelling exhibition that takes in Shanghai (5-6 March), Beijing (8-9 March), Taipei (22-23 March) and Kaohsiung  (25-26 March) before it is auctioned by Sotheby's Hong Kong at the Hong Kong Convention and Exhibition Centre in April.

Of the sale, QUEK Chin Yeow, Deputy Chairman and Head of Jewellery Department, Sotheby's Asia, says: "The Hutton-Mdivani Necklace is of the finest quality and striking proportions. This jadeite bead necklace with a storied past is the epitome of the mysterious and captivating beauty of jadeite, the most revered oriental gemstone, and evokes the glamour of distinguished style icons of both China and the West at the turn of the last century.  It stands as the most important piece of jadeite jewellery known to the world and is set to engage keen competition from jewellery cognoscenti."