A 100 carat ultimate emerald-cut diamond sells for $22 million at Sotheby’s New York, placing it in a record-breaking league of its own.

The most expensive diamond, dubbed the "ultimate emerald-cut diamond", sold for $22.1 million at Sotheby's Auction of Magnificent Jewels on 21 April. Weighing in at 100.20ct, the size and exceptional quality of this extraordinary D color, Internally Flawless, Type IIA stone, places the diamond in a record-breaking league of its own.

Not only is it the largest perfect emerald-cut diamond to ever be offered at auction, the giant gemstone is now also the first 100-plus carat perfect diamond to be sold at a jewelry auction in the US. The remarkable stone also achieved the highest price for any colorless diamond auctioned in New York.

It is incredibly unusual to see a diamond of this size cut into an emerald shape, and the precious stone attracted a great deal of interest on the Sotheby's jewelry international tour, which preceded this week's auction. Cut from a rough stone of more than 200ct, and found in a South African mine owned by De Beers, it took a year to perfect the final shape.

Lisa Hubbard, Chairman, North and South America, Sotheby's International Jewelry Division, said: "This diamond is exceptional in every sense of the word, and we were thrilled to see it achieve such a strong result. The stone captivated people around the world throughout our extensive travels this spring, but it was a particular privilege to offer it at our New York headquarters."

In the last 25 years, only six perfect diamonds weighing more than 100ct have sold at auction, with five of them going under the hammer at Sotheby's in Geneva, Hong Kong and now New York.

While news of the results of the Magnificent Jewels Sale was naturally dominated by the spectacular gemstone, a number of other lots helped push total sales to $65 million, setting a new record for Sotheby's New York.

Big engagement rings featured strongly in the top 10 lots, including a 22.30ct oval-cut diamond ring that sold for $3.3 million, and a Fancy purplish pink diamond and sapphire ring, which fetched $2.4 million. Colored gemstones also attracted much interest from bidders, both online and in the sales room, with an emerald and diamond pendant that once belonged to the wife of American industrialist Henry Flagler achieving the jewelry auction's third-highest winning bid at $2.8 million.

A 1920s Mughal Empire-style Cartier necklace designed by Charles Jacqueau also sold for $2.6 million. Made from platinum and set with emeralds, sapphires, lapis lazuli and diamonds, the necklace belonged to the wife of Baron Eugene de Rothschild and featured in the recent Cartier exhibition at the Denver Museum. An online bidder snapped up another of the big engagement rings, this time a Cartier Kashmir sapphire and diamond ring dating back to 1915, for $1.9 million.

A number of jewels from private collections were also offered for sale, including a diamond and sapphire brooch designed by Schlumberger for Tiffany & Co. Part of the late Bunny Mellon's private collection, the brooch sold for $1 million.

Gary Schuler, Head of Sotheby's Jewelry Department in New York, said: "It was encouraging to see the impact of private collectors throughout the day, including at the highest end of our sale - eight of our top 10 pieces were purchased by private individuals. Our strong results spanned each of the categories that have driven the auction market in recent seasons: top-quality diamonds and gemstones; signed and historic jewels; and pieces with notable provenance. Online bidding and buying also contributed heavily to our record total, including the second-highest price of the day: $3.3 million for a magnificent 22.30 carat diamond ring." 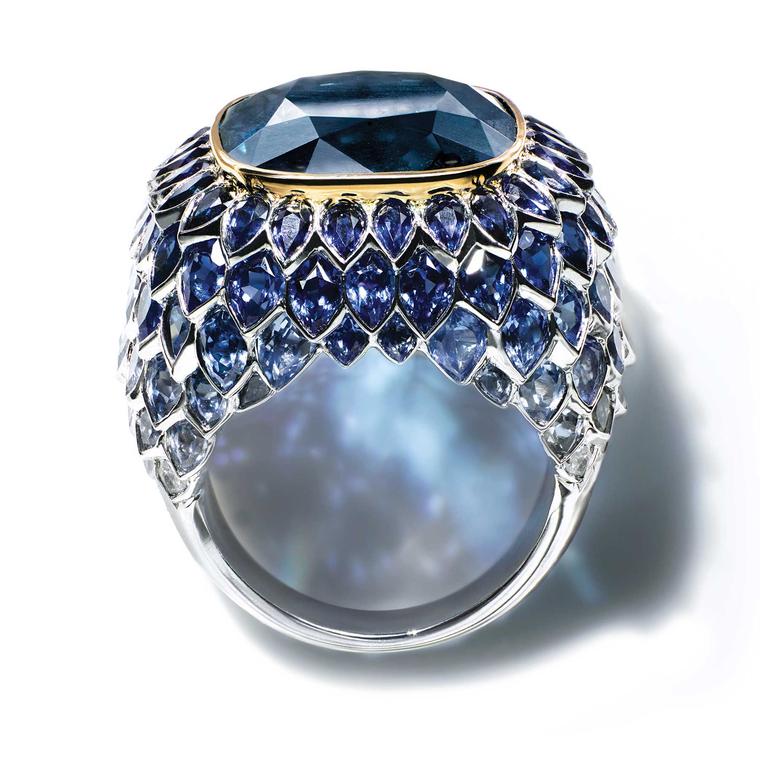