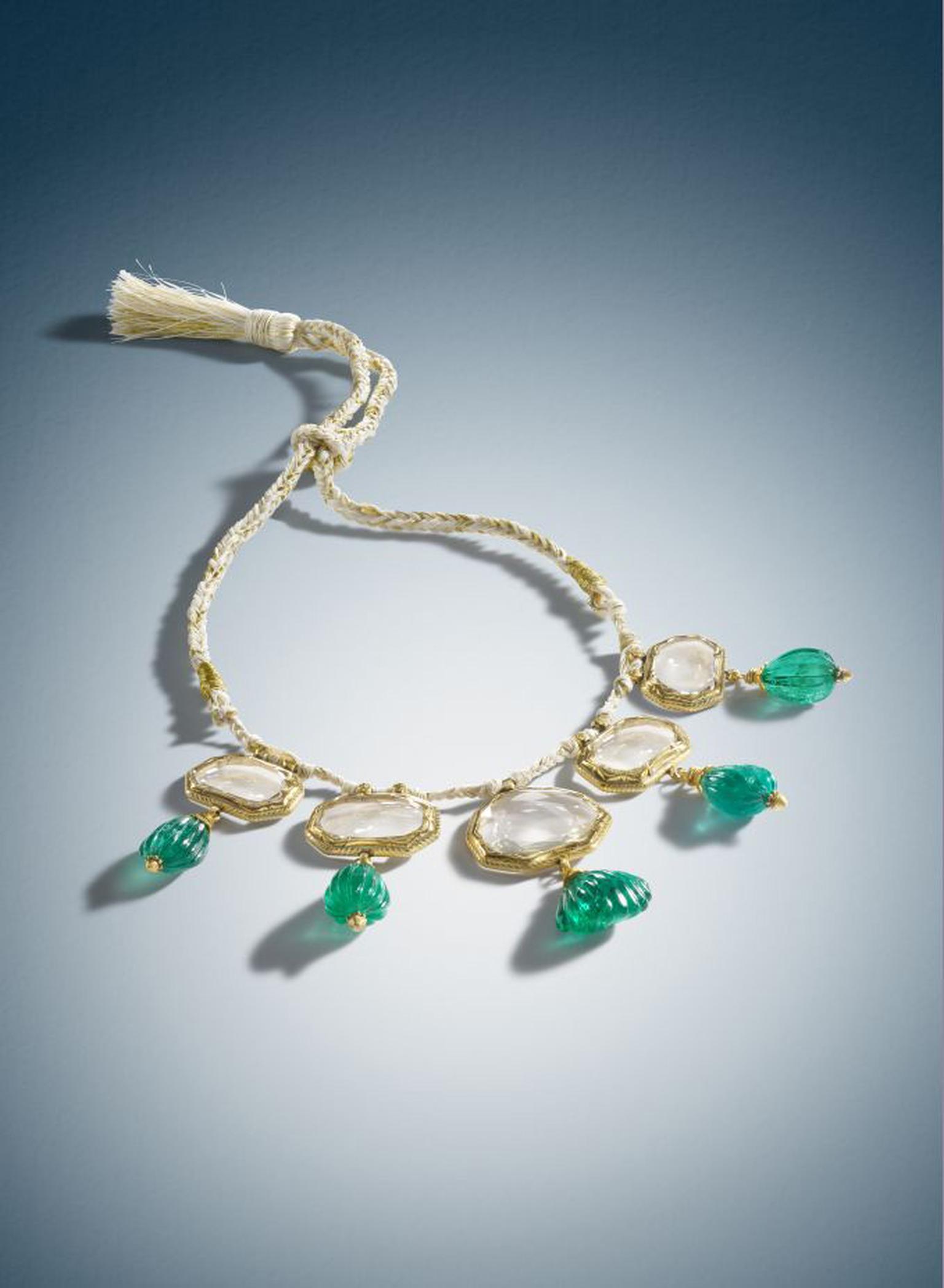 One of the most important and valuable pieces of Mughal jewellery ever seen on the market is being offered for private sale at Bonhams. The jewel in question is a 17th century Mughal mirror diamond and emerald necklace on a silk cord.

The necklace is made up of five mirror or portrait or tablet diamonds and the largest diamond at the centre of the necklace measures 24.3 mm across and weighs 28 carats. The five diamonds are documented by Bonhams as the largest known matching set of flat diamonds from the Mughal 17th century. All five are Golconda diamonds from the Deccan plateau in India and as well as their symbolic and historical value the early diamond cutting techniques seen on the stones is rare.  Few of these historic diamonds survive as many were re-cut in the C19th and early 20th century when more complex diamond cutting techniques such as the brilliant cut were available. To have one such clear and large mirror diamond is rare enough, but to have five matching ones makes this necklace exceptional and a musuem-worthy piece.

The 18th century Columbian emerald fluted drops were added later and are each topped with a gold cap. It is likely to have belonged to a Mughal prince and perhaps part of a longer string though no documentation exists to confirm this. "Their antiquity is firmly established by their sheer size, quality, cut and the manner in which they are mounted in strikingly simple gold settings," says the literature on the gem. "Their appearance and, more importantly, the survival of not one but five exceptional quality gems is unparalleled. They are, undoubtedly, priceless treasures from the history of Indian jewellery," continues the explanation.

Pendants such as the Mughal Mirror Diamond necklace were an important element of Mughal jewellery and were used as turban ornaments and armbands, displaying the most spectacular gems in the treasury as emblems of power. They also had talismanic and mystic connotations bestowed on both the wearer and anyone who saw the jewels and particularly so if they saw their image reflected back in the mirror diamond, hence its name.

The name portrait, mirror or tablet refers to the fact that they were sometimes used to lay over a miniature portrait such as the one of Tsar Alexander I now in the Kremlin's Diamond Fund in Moscow or over the dial of a watch. The diamonds were cut from macles or slivers of diamond and minimally faceted to the achieve the largest gem as close to its natural state as possible.

Matthew Girling, Bonhams CEO and International Head of Jewellery, remarks, "We are honoured to offer the Mughal Mirror Diamond necklace for private sale. Having worked in the jewellery business for over thirty years, I have rarely come across such a masterpiece in terms of craftsmanship and survival. The presentation of the Mughal Mirror Diamond necklace, containing five extraordinarily well matched mirror diamonds, is causing great excitement in the world of jewellery scholars as well as potential buyers. This is a unique 'once-in-a-lifetime' opportunity to acquire something of eternal beauty, importance and lasting value."