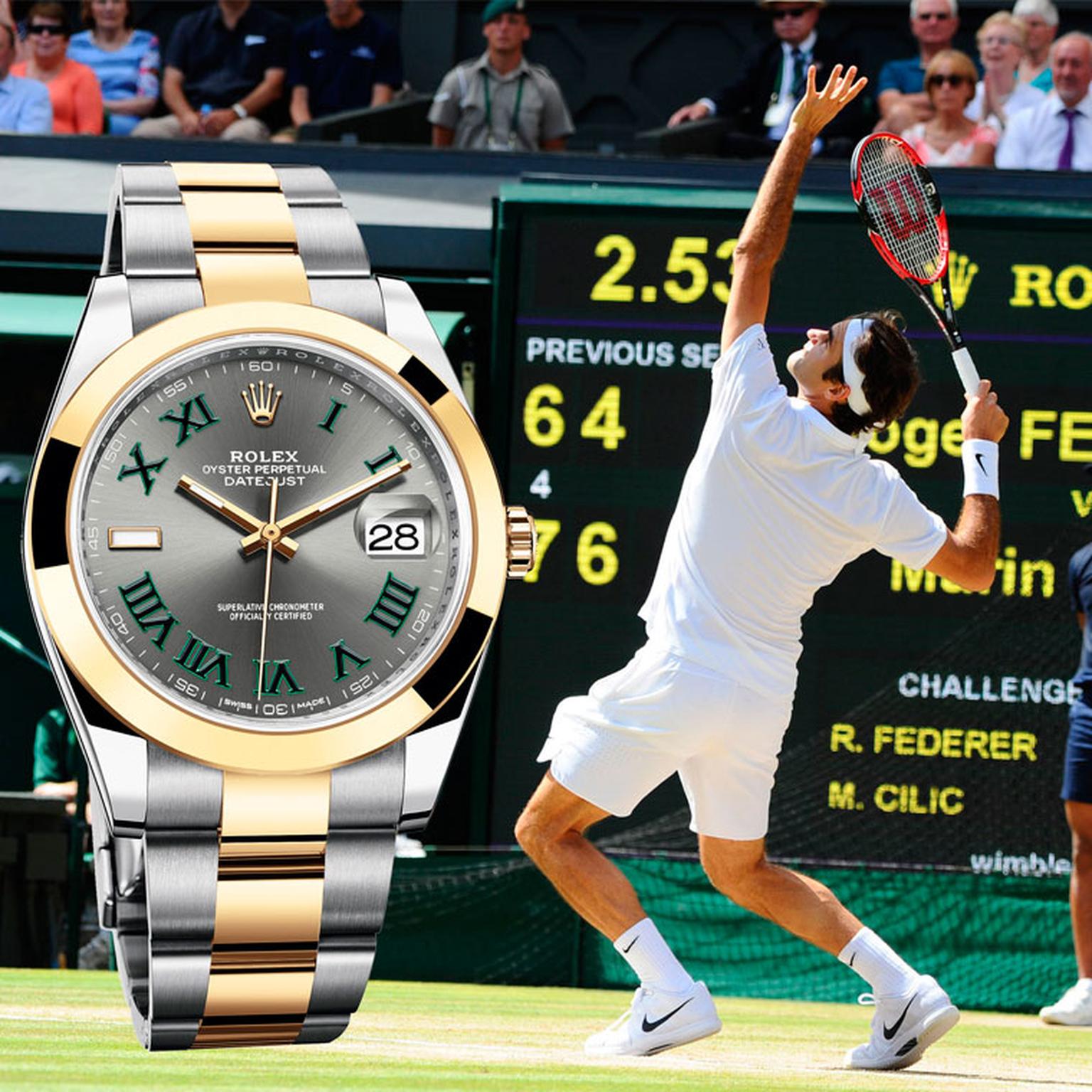 The oldest tennis tournament in the world is in full swing, and this high-profile event, which is followed passionately around the world, is an enticing opportunity for watch brands to get their product into the public eye.

The tournament event played on grass, where players are expected to wear all-white and bow or curtesy to the Royal Box, Wimbledon is a hallowed British institution dating back to 1877. With an expected attendance of close to half-a-million spectators, this year 250 ball boys and girls will be running to and fro on the courts of the 674 matches scheduled to be played. A total of 28,000 kilos of strawberries and 29,000 bottles of champagne will be consumed, and the winner of the men’s singles will be taking home £2.2 million in prize money and the famous pineapple-topped trophy.

Rolex: the Official Timekeeper of Wimbledon

Rolex has been the Official Timekeeper of Wimbledon since 1978 and clocks inside the arena, on the court and throughout the grounds – including the scoreboards – have become as much a part of the grassy court scenery as strawberries and cream. Roger Federer, the bookies’ favourite, is one of Rolex’s high profile ‘testimonees’, and the seven-time Swiss Wimbledon champion might well be donning the new Datejust 41mm, or the Rolex GMT-Master II he wore to raise the trophy on the occasion of his fifth Australian Open victory in February 2017.

If there is a watch that looks the part for this tournament, it is this all-time classic Rolex Datejust model. Directly descended from the very first models that cemented the Rolex empire, the Datejust was introduced in 1945 and was the first model with an automatic movement to display the date in a window at 3 o’clock on the dial enhanced in 1953 with the Cyclops magnifying lens.

The dark green Roman numerals set against the slate-grey dial pick up on Wimbledon’s emblematic grass courts and green installations. Revisited in a 41mm gold and steel case, powering the Datejust 41 is a new-generation movement developed and manufactured by Rolex. Protected with 14 patents and a powerhouse of innovations regarding precision, power reserve, shock and magnetic resistance and reliability, this watch, like all Rolex watches, is covered by the Superlative Chronometer certification.

Rafael Nadal and Richard Mille: a match of a lifetime

Spanish tennis legend Rafael Nadal will be vying for his third Wimbledon title but, as he commented in an interview with Eurosport, he does not relish the idea of facing Roger Federer if he reaches the final. Having made tennis history after claiming his 10th French Open title in June 2017, the King of Clay has worn watches by Richard Mille since 2012 and gave his new, bright red and yellow RM 27-03 tourbillon a good old thrashing at Roland Garros.

Designed specifically for the player, the watch can withstand forces up to 10,000gs and weighs just 34g. Decked out in a Spanish-themed stripy yellow and red case made from Quartz TPT®, the watch features a skeletonised tourbillon movement and will be produced in a limited edition of 50 with a price tag of £698,000. In keeping with Wimbledon’s “entirely white” attire rule, Nadal has exchanged the original yellow strap for a white one.

Rising star Alexander Zverev – aka Sascha – also forms part of Richard Mille’s elite stable of athletes. Following in the footsteps of Nadal, this 20-year-old German prodigy, who is touted by many as the next generation of international tennis stars, wears an RM 27-01 on his wrist during matches. Developed hand in hand with Nadal in 2013, the RM 27-01 is a featherweight champion weighing in at just 19g, including the strap, and capable of handling accelerations of up to 5,000gs.

In a shock defeat, three-time Grand Slam champion Stanislas Wawrinka lost to an exultant Daniil Medvedev and abandoned centre court with a contrite farewell.  As “Stan the Man” waved goodbye, beady-eyed watch fanatics zeroed in on the new black ceramic Audemars Piguet Royal Oak Perpetual Calendar watch he was wearing over a white bandage on his wrist.

Like Nadal, Wawrinka wears his timepiece during the heat of battle, and both men wear watches with complications that are generally more suited to resting in a safe given their delicate constitutions and hefty price tags. Clad in a high-tech, virtually scratchproof black ceramic capable of withstanding high temperatures and thermal shocks, Wawrinka’s watch emerged from the onslaught on centre court in far better condition than its owner.

Novak Djokovic gets his kinetic energy from Seiko

Novak Djokovic has made it to the second round after his opponent Martin Klizan retired, and although the currently ranked world No. 4 player wasn’t wearing a watch during the match, Nole has been a Seiko ambassador for the last four years.

The latest Seiko watch to commemorate the Serbo-Japanese friendship is the Premier Novak Djokovic Kinetic Perpetual, a special-edition dress model customised with sporty touches and Seiko’s unique Kinetic calibre, which allows the wearer’s movements to power the watch but enters sleep mode when it is not being worn. The catch is that as soon as it is picked up again, even after a long sleep of four years, it awakens automatically and resets itself to the correct date and time up until February 2100. Whether the Serbian player will be able to activate his kinetic energy on demand remains to be seen.

Currently ranked as the world’s No. 1 men’s singles player, Andy Murray occupies the last spot in this article for the simple fact that he is flying solo this year and his Rado watch partnership is no longer in place. You can bet many watch brands will have the Scot on their radar, though. Britain’s very own Bremont watch company would be a friendly fit and no doubt up to the challenge of joining Murray in his ice baths. 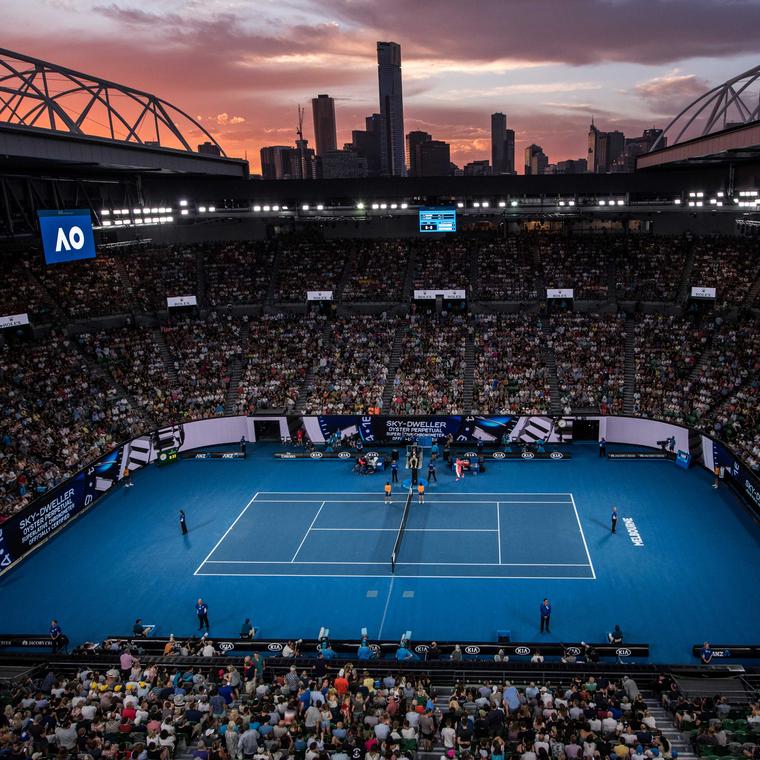