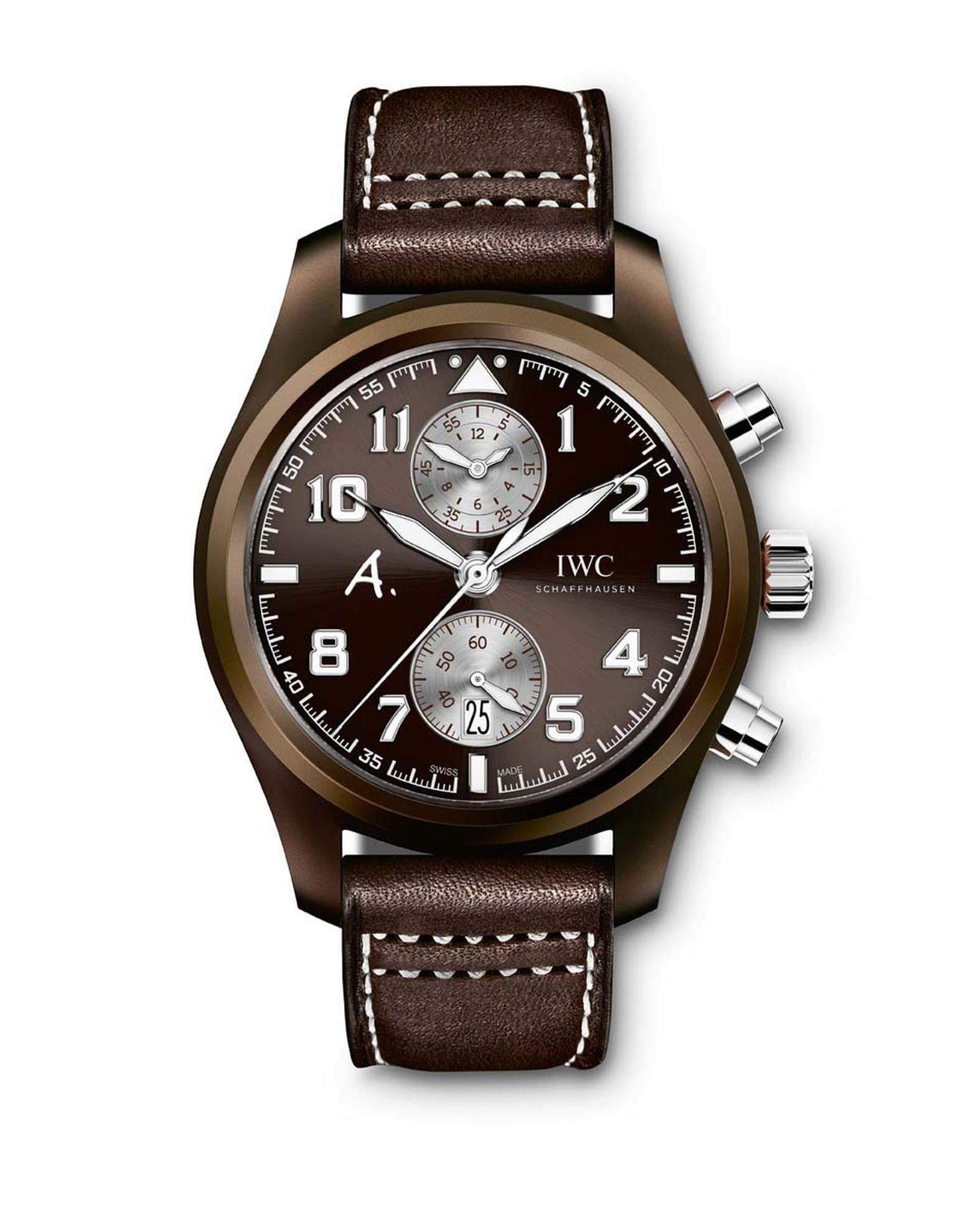 When the Brazilian aviator Alberto Santos-Dumont flew over Paris in his hot air balloon he not only earned himself a reputation as a daredevil, he also made history when he asked his good friend, the jeweller Louis Cartier, to make him a watch to wear on his wrist to accompany him on his aeronautical adventures.

Following the birth of the world's first pilot's watch in 1904, many brands have taken to the skies and designed models specifically for the world of aviation. Enlisting the aid of American aviation hero Charles Lindbergh, who made the first solo transatlantic flight in 1927, Swiss watchmaker Longines designed the Hour Angle watch.

IWC was also among the early manufacturers to design watches for pilots - for the Royal Air Force since 1936 and also for the Luftwaffe, the German Air Force during WWII.

Rolex was seduced by the cockpit and made watches dedicated to commercial pilots who crossed multiple time zones, and Breitling also made headlines in the 1950s with the Navitimer, a complete navigation instrument for both professional and amateur pilots.

Many of these early aviator watches are still on the market today with slightly updated design features and, of course, modern mechanical movements.

Even today, the sight of a gentleman dressed in an immaculate three-piece suit flying through the sky in a homemade hot air balloon would cause a stir. But incredibly, the Brazilian aviator Alberto Santos-Dumont used hot air balloons as his primary form of transport while living in Paris in the early 20th century.

As it soon became apparent to Santos-Dumont, extracting a pocket watch from a waistcoat while piloting a flying machine was a somewhat fiddly process, so he asked his friend Louis Cartier to make him a watch that could be worn on the wrist. Little did Santos-Dumont know that the resulting timepiece would become the first serial-produced wristwatch in 1904, and the world's first pilot's watch.

With its rectangular case and bold Roman numerals, the Cartier Santos-Dumont watch has flown through intact to the 21st century and is still one of Cartier's best-selling watches.

When Rolex introduced its GMT-Master in 1954, the Swiss manufacturer wrote an important chapter in horological history. The Rolex GMT-Master watch, designed in collaboration with Pan Am Airways for its pilots, displayed multiple time zones simultaneously and had a rotating 24-hour graduated bezel.

This year at Baselworld, Rolex unveiled a world first: the new Oyster Perpetual GMT-Master II with a red and blue Cerachrom ceramic insert on the bezel. Nicknamed the "Pepsi", the new ceramic bezel is an exceptional technical achievement that honours the original GMT-Master's iconic two colour bezel.

Breitling equals aviation - at least when talking about its illustrious Navitimer wrist chronograph, which has become a cult watch among professional pilots and aviation enthusiasts. Launched in 1952, the Navitimer featured a circular slide rule allowing pilots to perform all navigation-related calculations required to pilot a plane.

This year the Breitling Navitimer 01 Panamerican was presented with a bronze coloured dial and a transparent caseback to reveal the automatic in-house calibre O1 with COSC chronometer certification.

The G50 collection of chronographs and watches, which are cut from the steel of an Italian F-104 jetfighter, leave little doubt about their aviation inspiration: the black dial on the G50, with its chronometer-certified automatic movement, provides superior legibility, even in the tightest and darkest of cockpits.

Longines is one of the pioneers of pilot's watches thanks to the watch it designed in collaboration with Charles Lindbergh after his historic transatlantic solo flight. The Swiss watch brand continues to offer a range pilot's watches, including the Longines Avigation Watch Type A-7 - a reedition of the famous pilot's watch from the 1920-30s.

Back then, the Avigation Watch Type A-7 was a military-issue wristwatch worn by air force pilots. Today, the Avigation remains true to its original design with its curious dial angled at 50 degrees to the right - enabling the pilot an even better view of the dial - and its large fluted crown originally designed to be manipulated with thick aviator gloves. It even offers a hinged caseback that allows you to look into the automatic single-pusher chronograph movement.

You may not be familiar with Alpina, but this Swiss watch brand offers a broad collection of rugged and sporty watches. Furthermore, in the first half of the 20th century, Alpina was an official supplier of military aviation watches to continental air forces, which explains the aviator-inspired collection currently on offer.

Alpina is in the process of relaunching its military-issue pilots' watches, including the 44mm Startimer Pilot. With its black PVD coating and automatic bi-compax chronograph movement, it is a great ambassador for the Swiss watchmaker's historical affair with aviation.

You probably had The Little Prince read out loud to you by your parents or enjoyed this classic book yourself during your school years. But did you know that the French author, Antoine de Saint-Exupéry, who penned the story about the little boy on his little asteroid named B-612, was an avid pilot as well?

Sadly, Saint-Exupéry passed away at the early age of 44 when a German fighter plane shot down his Lockheed P-38 Lightning near the French coastline on 31 July 1944. To commemorate his life, Swiss watch manufacturer IWC launched a collection of watches, the latest of which is the Pilot´s Edition "The Last Flight" with an in-house chronograph movement made from a ceramic silicon nitride alloy with a spectacular brown finish.

The 46mm IWC "The Last Flight" watch, limited to 17 pieces, is virtually scratch-proof thanks to the ceramic case. Ceramic and titanium as well as ceramic and rose gold models are also available, limited to 1,700 and 170 pieces respectively.

Read about men's watch trends at the SIHH 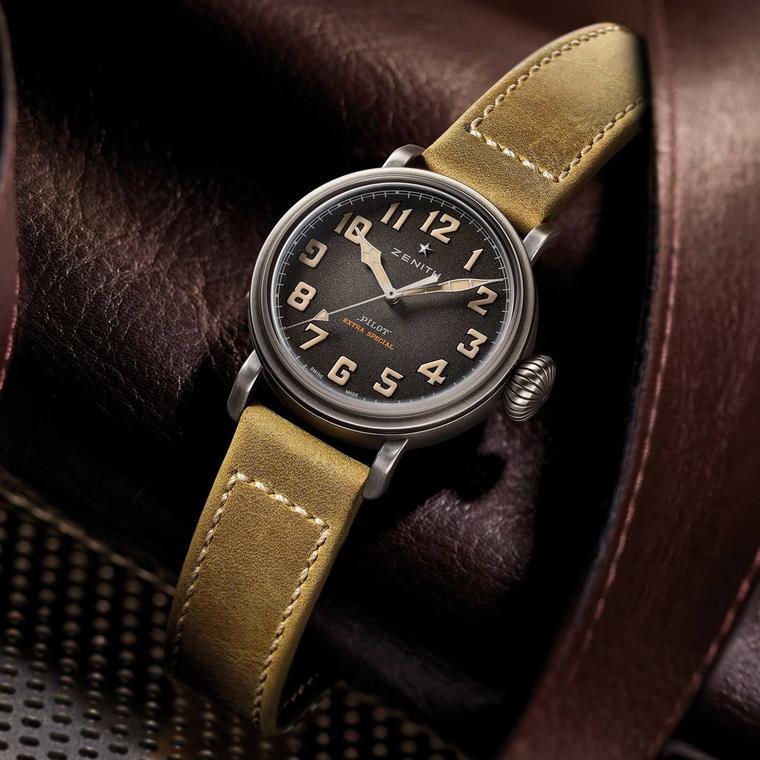 Aviator watches: the best designs and where to buy them