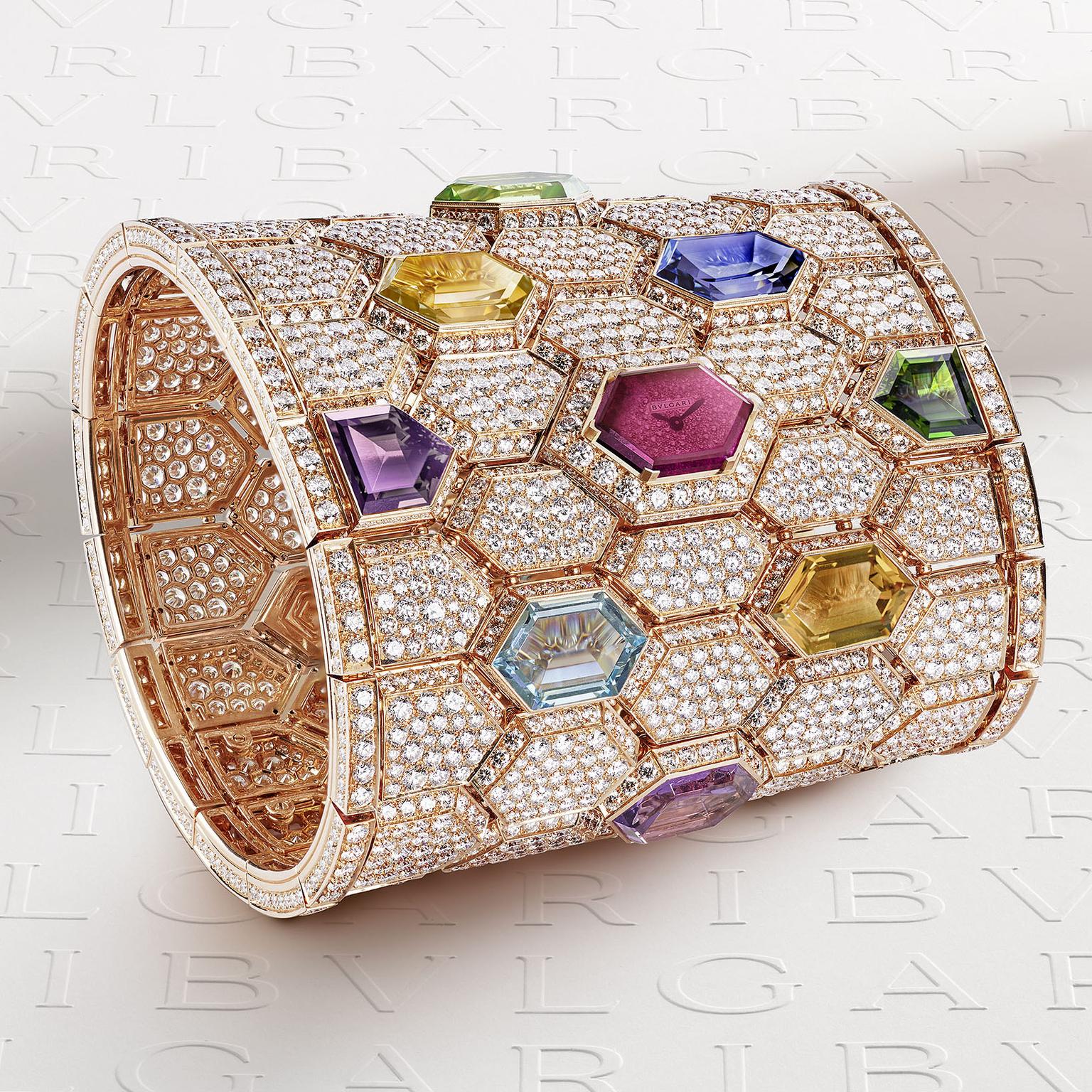 Bulgari reveals three new jewellery watches that capture the unbridled glamour and opulence of la dolce vita.  In a seamless fusion of high jewellery skills and watchmaking prowess, women can adorn their wrists with watches every bit as desirable as one of the house’s famous jewels.  Presented at the Watches & Wonders online event, Bulgari made a strong statement about its commitment to producing high-end watches using highly precious materials, a feat that only handful of maisons are able to achieve, many of which were showcasing their designs on this global platform.

Most impressive and unmistakably in the style of Bulgari, is the Serpenti Misteriosi Cleopatra, the latest incarnation of the iconic snake. Serpents have been coiling up the wrists of women since before the Egyptians but it was Cleopatra who captured our imagination with her dazzling jewels, and in particular those with pharaonic motifs such as the serpent.  Elizabeth Taylor brought to the world the allure of the Bulgari Serpenti when she was photographed on the set of Cleopotra in Cinecittá in Rome in 1962 wearing her Bulgari Serpenti bracelet-watch. The glamour of Hollywood had been transposed to Rome as stars and directors flocked to Italy, the new destination for filmmaking and luxury leisure.

This one-of-a-kind cuff watch in brilliant colours employs contemporary design to tell a new tale of the eternal allure of the Queen of the Nile. The flexible manchette-style watch is made up of snake scales conceals a dial beneath a glowing, pinky-red rubellite and nine more gemstones surrounded by shimmering diamonds. This impressive display of jewellery making prowess is thanks to Bvlgari’s master goldsmiths and gem-setters, who worked closely with the gemmology team in Rome to achieve the intense vibrancy of colour. The gem-hunting team scoured the earth for the most intensely hued amethysts, citrines, aquamarine, rubellite, Chrome tourmaline, tanzanite and peridot to create the mosaic of colour totalling 88.30 carats topped up with by close to 4,000 diamonds. The Roman gemsetters focussed for more than 470 hours to create this dazzling watch, that I am sure Elizabeth Taylor would have had her eye on.

Slightly easier to wear on a day to day basis – if you are the type of woman who loves dressing up just because – are the Diva’s Dream Divissima and Astrale bejewelled watches. Scaled down to slip under a shirt cuff, these watches are inspired by Bulgari’s designs for high jewellery watches but toned down ever so slightly to make them easier

But there is no comprising on the bright and glossy, generous-sized cabochon gems in rich, saturated colours. Capturing the spontaneity and vivacity of the golden era of Rome, the Astrale and Divissima are bursting with the joy of colour and a love of life that invites you to seize the moment.

The Divissima comes in a diamond or emerald version. The former beams out the fire of eight brilliant cut diamonds or the latter the rich velvet green of emeralds,  all set in delicate mounts, that encircle the dial with all the lightness of a ribbon.  The Astrale creates a halo of citrines, amethysts, peridot, blue topaz and rhodelite to encircle the dial.

One look at the Astrale and Divissima watches and I can just imagine how glorious they would look in the sun at lunchtime al fresco, inviting you to embrace life and live each moment packed with colour and happiness. 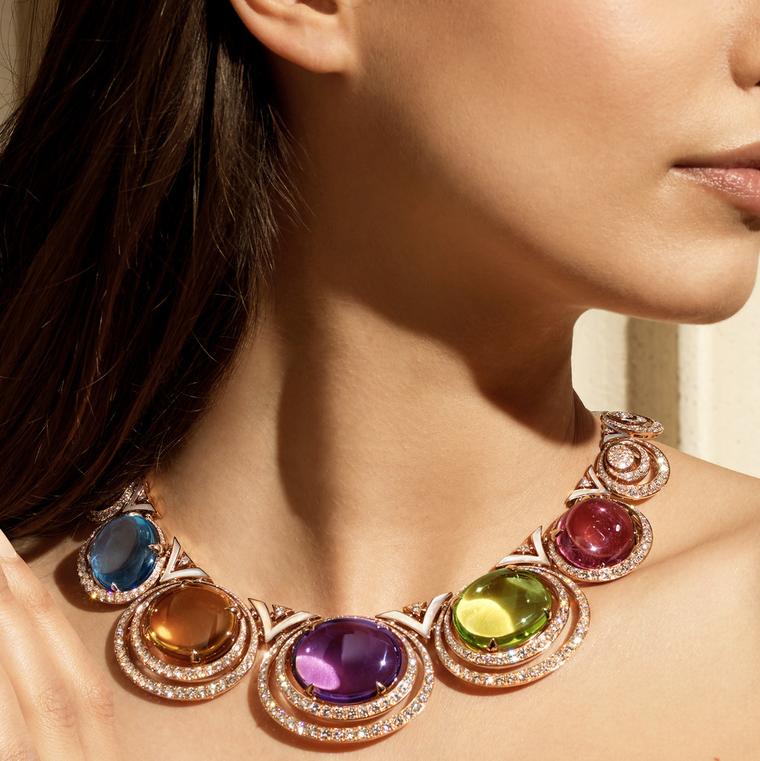 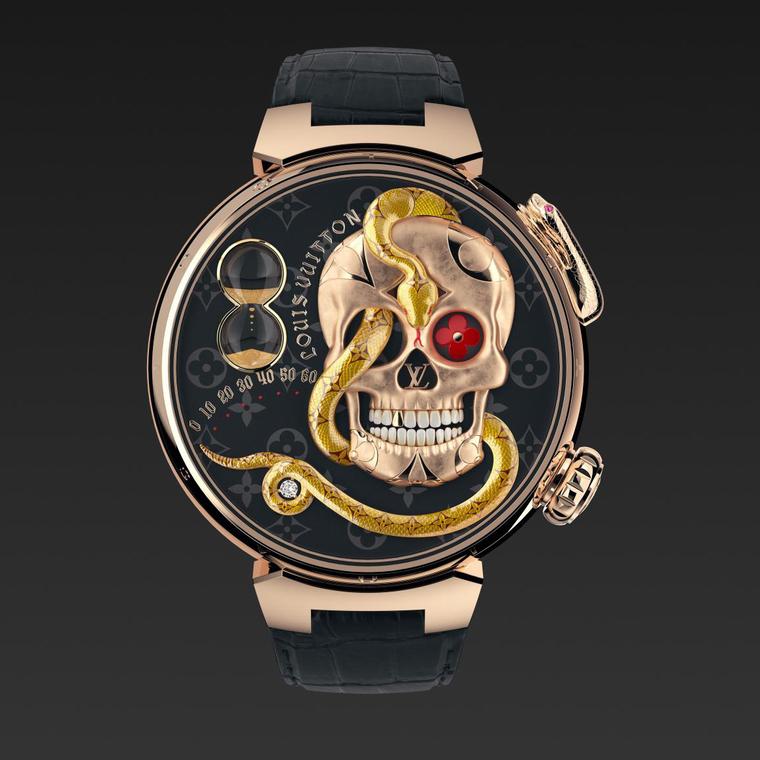