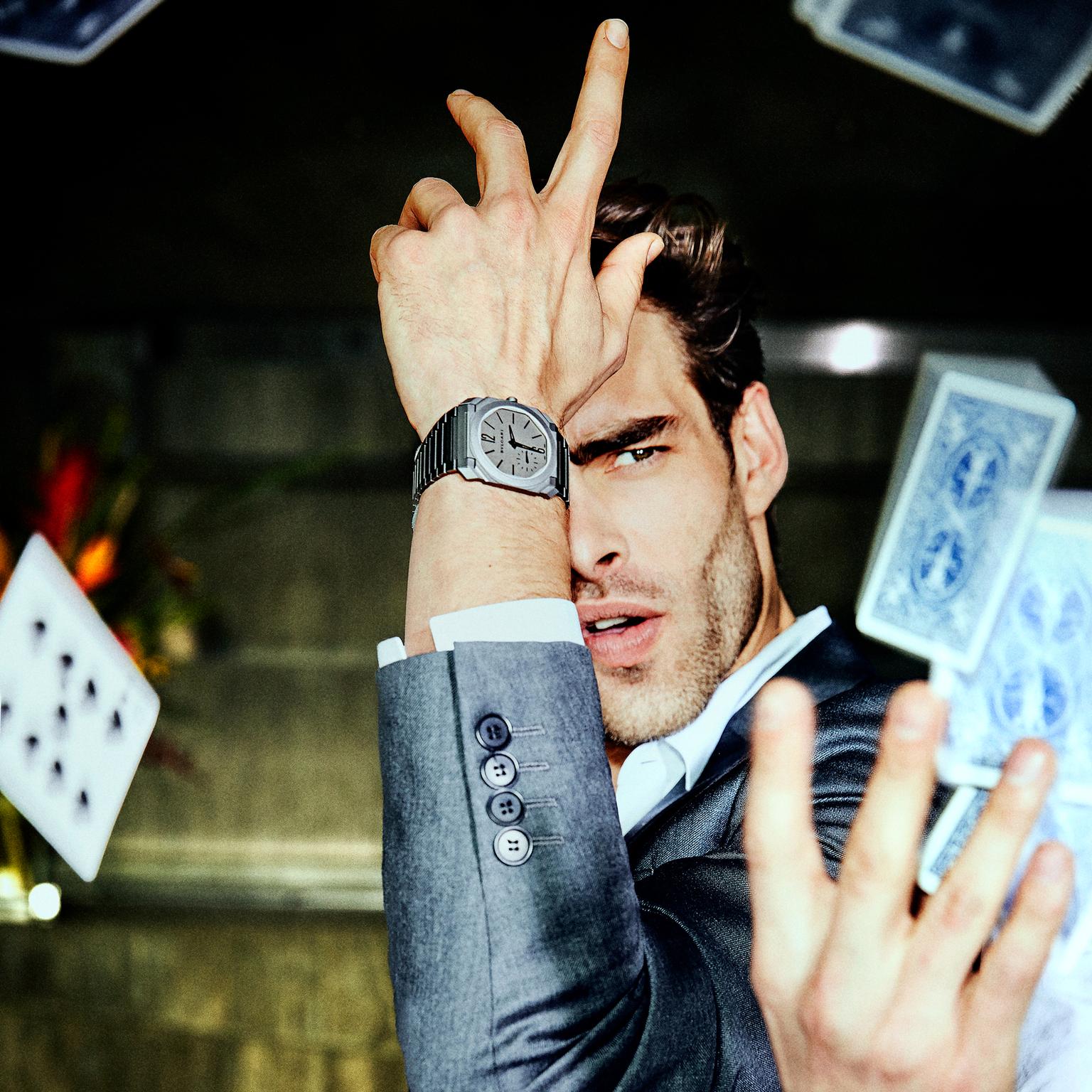 Bulgari has been stealing the headlines of late with its three record-breaking ultra-thin Octo Finissimo watches. Back in 2014, Bulgari launched the world’s thinnest tourbillon, in 2016 the slimmest minute repeater chimed its way on the scene, and in 2017 the laurels for the leanest automatic movement on our planet go to Bulgari again. Using the virile, octagonal chassis of the Octo collection, the ultra-thin Octo Finissimo watches consolidate the expansion of Bulgari’s watchmaking empire, which is built upon a winning fusion of Roman architecture, Swiss mechanics and Italian design flair.

Above and beyond the technical wizardry involved in packing so many pieces into areas the size and thickness of a coin, Bulgari interprets ultra-thin like nobody else on the market.  Speaking to Guido Terreni, the managing director of Bulgari watches, it’s clear that Bulgari is pursuing a very different design strategy from the other ultra-thin players in the arena. “The ultra-thin sector is very strange,” he says. “It’s the only sector that produces objects that look dated; the aesthetic codes are from decades ago. It’s like me driving around in my grandfather’s car or wearing his clothes today. We Italians don’t see this as aesthetic progress. We are very sensitive to contemporary aesthetics, so we have changed the rules of this segment and created a luxury watch that is a reflection of the times we live in.”

As Rome’s most famous temple of luxury, Bulgari is an integral part of the Roman landscape and has assimilated many aspects of the city’s imperial past into its design heritage. “Bulgari is a Roman jeweller and Roman culture is bold and self-confident,” says Terreni. “We used to rule the world 2,000 years ago and we don’t ask permission to do things, we just do them in a way that is unique and authentic.”

The architecture of the Octo collection is Roman to the core and was inspired by the coffering used on the ceiling of the Basilica of Maxentius in the Roman Forum. To lighten the weight of the colossal barrel vaults of the Basilica – the largest architectural structure of its day – Roman engineers used weight-saving techniques in the form of coffering, a series of sunken panels decorated with octagonal and circular shapes. Taking the analogy one step further, Bulgari’s watchmakers, like Rome’s ingenious architects, have whittled down the watch to its leanest expression possible while retaining its grandiose architecture, a fascinating interplay of geometric shapes.

The formidably fit and trim silhouette of Bulgari’s Octo Finissimo record breakers has been trumpeted to all four corners of the globe. “World records are part of being Italian – that bold and brazen character is very much part of our brand!” laughs Terreni.

Nobody – not even Piaget, which is famous for its ultra-thin watch movements –has managed to beat Bulgari’s three world records in the ultra-thin category. The Octo Finissimo Tourbillon of 2014 contains a movement just 1.95mm thick; the movement of the Minute Repeater, one of the toughest complications for a watchmaker to master, is wafer-thin at 3.12mm; and the Octo Finissimo Automatic, introduced in 2017, has a movement of 2.23mm.

In fact, it took Bulgari longer to develop the automatic movement than either the more complicated tourbillon or the minute repeater, both endowed with manual-winding movements. “The Automatic took six years to get right because of the delicate energetic balance. We had to come up with lots of technical solutions, like the platinum micro-rotor, which in turn provides a 60-hour power reserve,” says Terreni.

For many watch experts, an ultra-slim movement is a complication in its own right. However, at Bulgari, technicality is always at the service of aesthetics. “Breaking a world record wasn’t the goal we had in mind when designing the Octo Finissimo collection. Before any other consideration, the watch had to be alluring,” explains Terreni.

Fabrizio Buonamassa, the director of watch design at Bulgari, sums up the concept very clearly: “Germans like to say that form follows function. For Italians, beauty follows function.” All the Octo Finissimo watches showcase their movements and, like the virile aesthetics of the case, the movement is bigger than most ultra-thin calibres, with contemporary touches. Also released in 2017 is the Octo Finissimo Tourbillon Skeleton with an entirely openworked tourbillon movement – still the thinnest of its kind in the world – revealing its 253 components on the dial and caseback side, with a black DLC-coated baseplate and bridges.

An Imperial coin and the world’s thinnest tourbillon

Bulgari’s iconic Monete collection, built around the incorporation of ancient coins in high jewellery, flipped over into male territory recently with the unveiling of the stunning Octo Finissimo Tourbillon Monete watch. A unique piece that already has an owner, the secret watch is, according to Buonamassa, “a new way for men to wear coins. Bulgari and coins are a perfect marriage, so I combined an ancient coin of Constantine I with the thinnest tourbillon movement in the world and you have a watch that is absolutely Roman, absolutely Bulgari!” We couldn’t agree more.

PREVIOUS TOP 5 Best in show: the most exciting jewels at IJL London NEXT ARTICLE Chaumet: A Liens jewel for all seasons 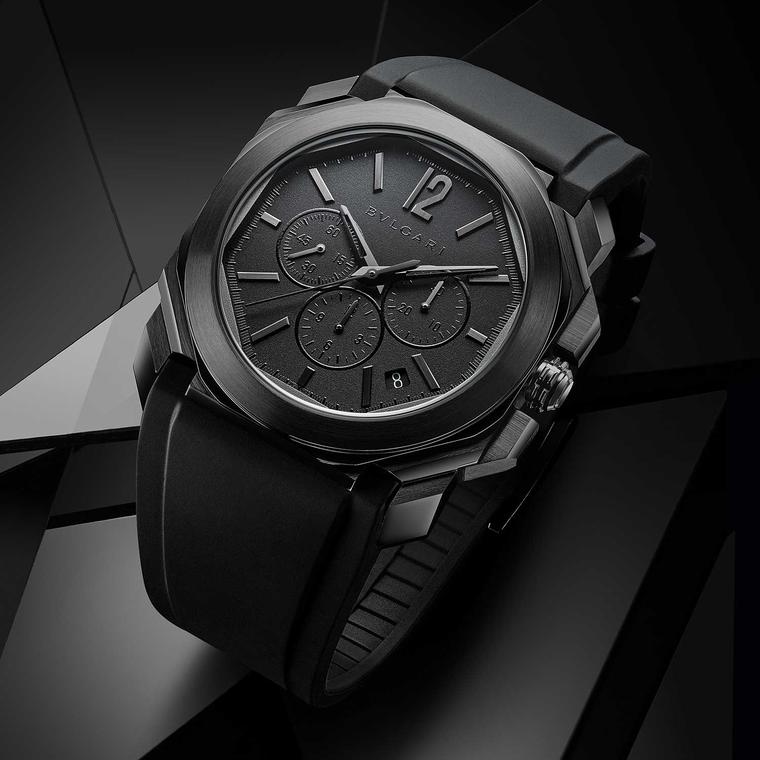 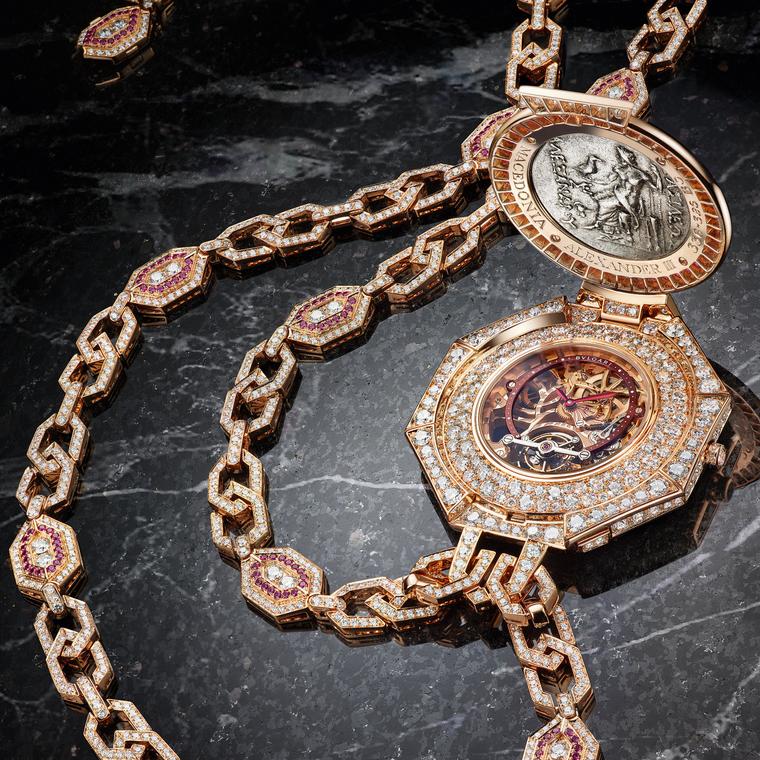 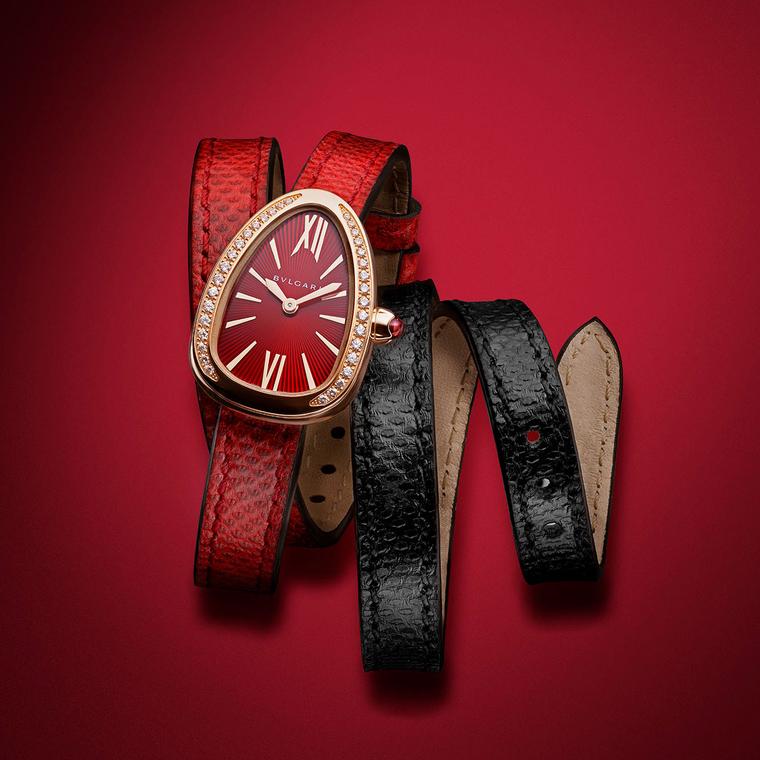