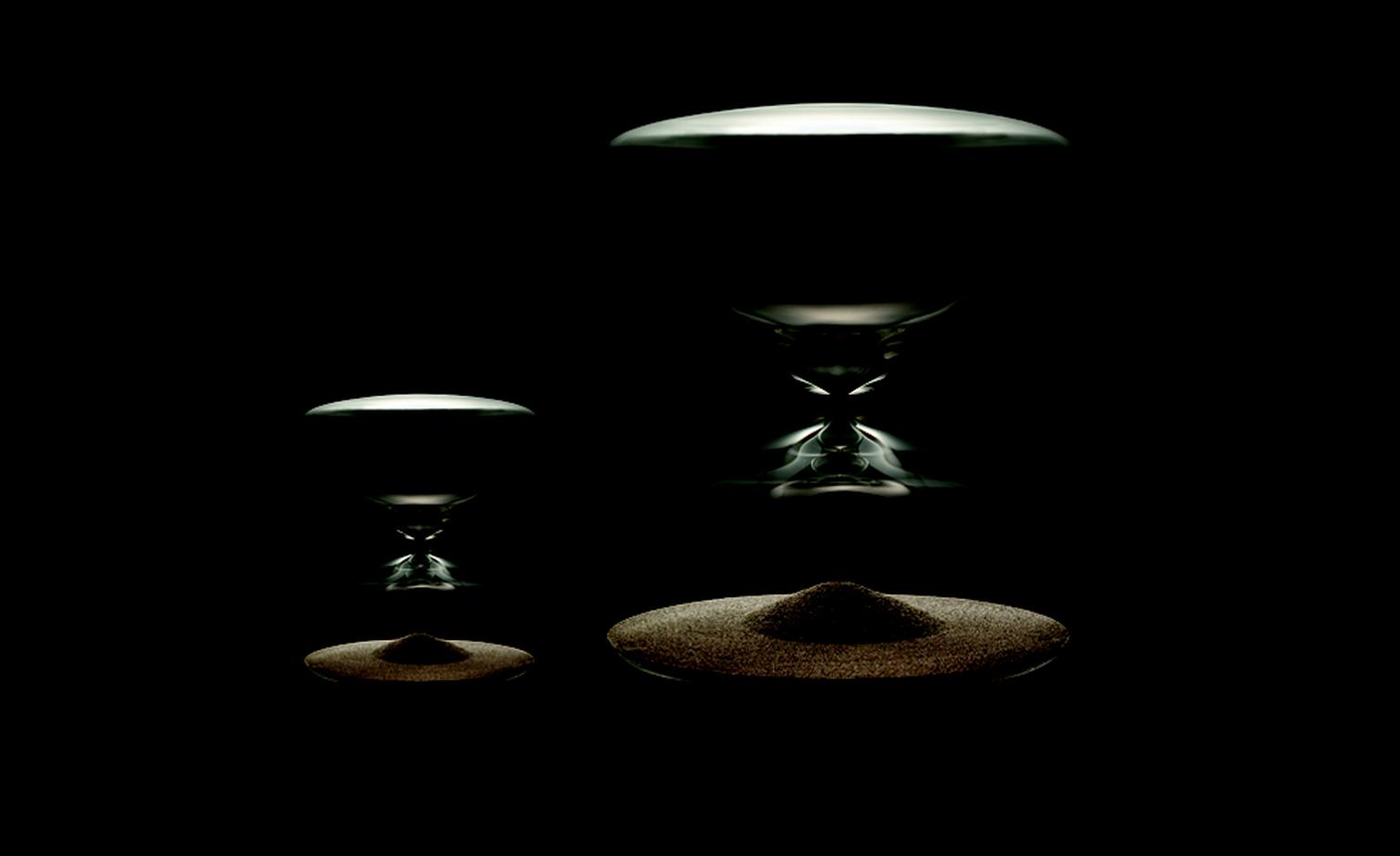 Marc Newson is at it again, playing around with our concepts of time. But this time with a smaller version of the Ikepod hour glass. Intended to be as much a sculptural object as a timekeeper, this year's smaller version (from £8,150) counts down to ten minutes in style. The simplicity of this piece belies its complexity. I never thought I would find myself lusting after an egg timer but I have a weak spot for all things Marc Newson. Created by watch house  Ikepod, that Newson co-owns with Adam Lindemann, the new low-tech timer is the little brother of last year's Hourglass. As its name suggests, the 2010 version timed to one hour, and the new mini-version shifts 1.2 million nanoballs in 10 minutes and weighs 1.5 kgs. These beautiful objects are not a kitchen counter sort of egg-timer but worthy of taking pride of place in your living room. And so they should be. The glass, that is all one piece, is made in Basel by a specialist company that normally supplies glass beakers and flasks to the pharmaceutical industry and the millions of nano-balls are coated in either copper, nickel or gold to give four different colour options.  Ikepod can only produce 4-8 hourglasses each month but as I write, the new small hourglasses are already on the shelves of cherry picked retailers around the world. I was fortunate enough to chat with Marc Newson at the launch of the first hourglass in London last year. "I was interested in having fun with time," explained Newson. "This hourglass is all about time but in a more esoteric and fundamental way. The watch industry is saturated with complexity so I thought that it would be amusing to try and redress that and create something fun. It's fun to step back every now and then and consider the concept of time." In 2006 Newson set the record price paid in history for furniture by a living designer with his Lockheed Lounger that sold for US$968,00 at Christies in New York. A record repeatedly and most recently broken onMay 13 2010 when a "Lockheed" prototype sold for a new zenith of US$ 2,098,500 at Philips DePury in New York. Newson has worked for Nike, created a concept car for Ford, cooperated with Qantas, Dom Perignon and designed clocks for Jaeger-LeCoultre. With this in mind,  £12,700 for the big-size glass figure of eight full of 8 million nano balls doesn't sound that unreasonable. And the smaller one starts at £8,150. "The price was not plucked out of a hat," explained Newson.  "It is absolutely linked to the cost of production and as no one is specialised in making hour glasses the simplicity of this piece belies its complexity." "Everything was pretty much stacked against us when it came to making the hour glass and we don't have a huge amount of room to manoeuvre on how the piece is produced so this affects its cost." The hourglass is made of one single piece of 3mm blown glass and is filled with 2.1 million hollowed out 0.2mm low carbon nickel-plated nano balls normally used in aeronautical precision engineering. These high-tech little balls were chosen over sand, with its random grain shapes, for greater accuracy of the hourglass that is precise to 2 minutes. The large piece weighs a hefty 6.7 kilograms. "We spent a long time finding balls that fitted the bill and once found a manufacturer in Switzerland we had to specify particular tolerances," explains Newson. "At first I didn't dare tell them for what we were going to use their balls as they would have run a mile. Now we must be one of their best customers." "The glass is blown in a single piece and to our knowledge no one has made an hour glass blown in one piece. Believe me, we approach dozens of manufacturer and no one but one could do it." "The most important part of the process was to guarantee the diameter of the aperture that governs the flow of the balls, that at the same time dictates accuracy. The issue is not making the aperture 1mm or 2mm wide but to make it the same in every one. So we had to create a small tool that fitted in there that is retracted before the piece is finished and blown around that piece. It's a tricky thing and combination of a little bit of engineering and glass blowing ingenuity." "We don't want to make lot of these hourglasses and we certainly don't want to go to Asia so things cost what they cost. And things in Switzerland cost a lot." And what do the design experts make of this? Alexander Payne, World Wide Director of Design at auction house Phillips de Pury & Company says of the hour glass: "What stands out is the designer pushing the limits of materials and processes. The quality and the exceptional way in which this piece is made immediately give the work its value.  Newson will produce the most poetic and visually striking design but also be so exacting in the details of the piece and specific materials he is using. It is for a very good reason that Newson is outstanding and commanding exceptional levels of demand. I am sure we will see some of these hour glasses at auction in the future." As for its original conception, Adam Lindemann, co-owner of Ikepod remarks: "I gave Marc Newson the brief. At Ikepod we needed something that would make it clear that we are not just watchmakers but designers. The greatest way to do this was to make an object that comes out of the roots of watchmaking and the hourglass was the perfect object.  It is the original chronometer and a sculpture all in one!"