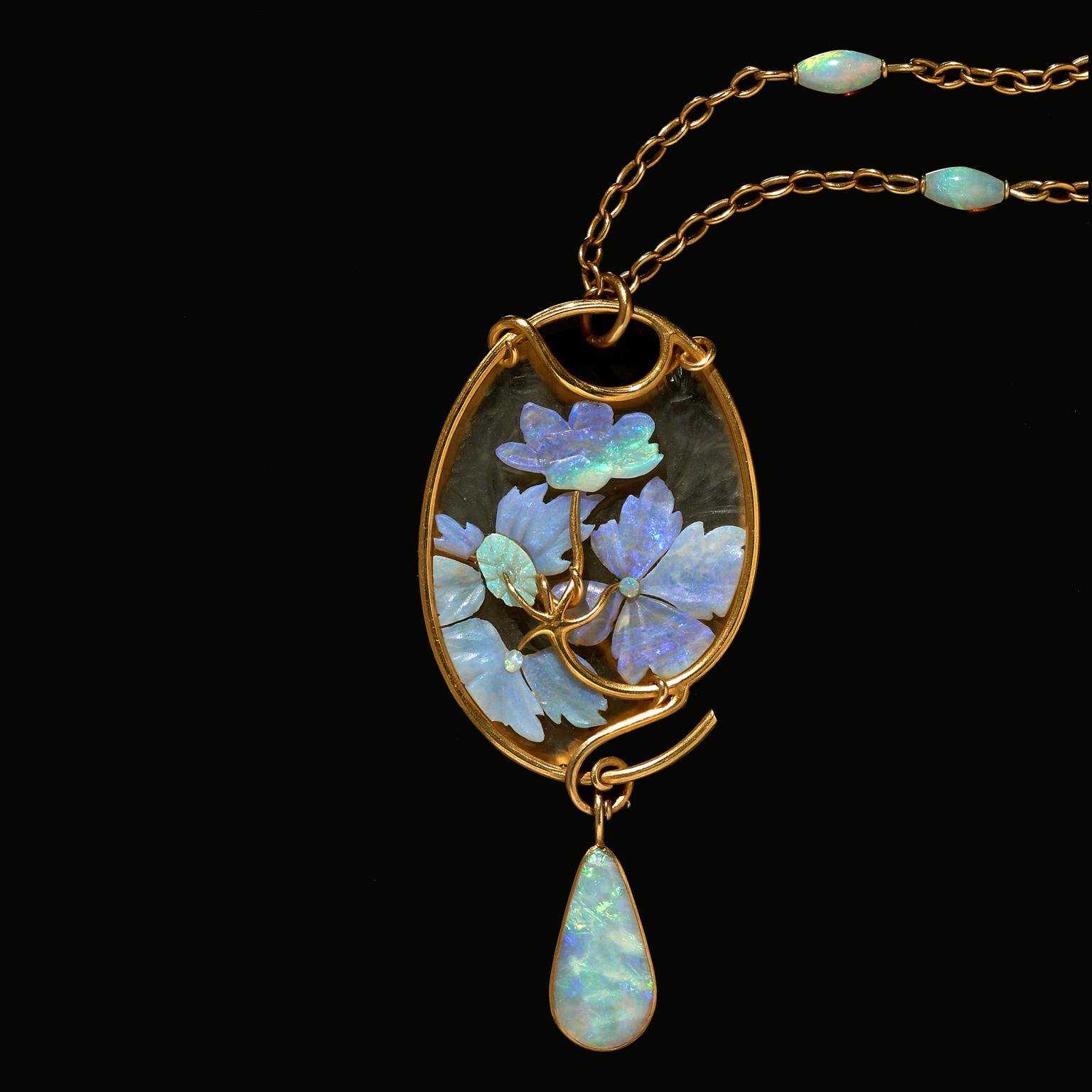 I could not think of a better way to spend Manhattan’s deep freeze than perusing and scouting out the Winter Antiques Show, which runs from January 22 to January 31 at the Park Avenue Armory between 66th and 67th Streets in New York.

As an avid antiques collector, I was awed by the vast selection, holding tightly on to my credit card, which seemed to be as moved as I was. This antiques fair not only provided shelter from the cold, but a peek at some jaw-dropping pieces, which disappointingly I could not afford - and even if I could, I would have nowhere to wear them, except maybe once a year to a black tie event.

Attending this show is like a winter wonderland of period and antique jewelry, as well as paintings, artwork and rare posters. I find the art of creating glimmering pieces to wear always intriguing and sentimental, and it makes me feel somewhat like a kid in a candy store. While I collect very specific time periods, I am equally entranced by all eras.

The Winter Antiques Show is a bit like being in a museum with its differently curated rooms, except you don’t have to whisper softly and you can actually purchase the exceptional pieces on display; many of them signed. The show is less about what period in jewelry is trending, or what motif is of the moment, and rather an overview of some of the best of jewelry’s past. Yet, with that said, there are certain items worth mentioning as popular pieces for collectors today: acrostic jewels, Etruscan Revival pieces, sentimental jewelry, and the Art Nouveau period - but more of the naturalistic forms and the vivid enameling than the ethereal female jewels so indicative of that era. The list continues with Renaissance rings, bracelets, pendants and demi-parures with various types of agate: banded, moss and dendritic, as well as pieces that were extremely inventive for their time.

My first stop was Wartski where I decided I could spend the entire week of the show. An acrostic bracelet was perhaps the most magnificent example of this category I have ever seen. It features sections of double hearts - one diamond and one with gemstones that spells Dearest. An example of a sentimental jewel that also surpassed most I have seen in this category was a Boucheron brooch of two cupids with an early cut diamond heart and ruby arrows. The signed Falize, Lalique and other French pieces in fitted boxes were everything you would imagine from these master jewelers.

And from the Italian front: James Robinson presented Castellani and Giuliano jewels that were impeccably fine examples of the Estruscan Revival period, as well as intricately crafted unsigned jewels from the Victorian period, including one of the best Scottish agate pieces I have ever seen.

A La Vieille Russie presented bracelets, brooches and earrings, which were all swoon-worthy, but one particular pair of enamel, rose diamond and gold tassel earrings caught my eye, as did an en tremblant floral spray Victorian brooch in impeccable condition. Kentshire Gallery never disappoints, whether it’s a hinged, wide-tapered, blue enamel bangle with a floral motif set with gold and rose diamonds, or a pair of Victorian, carved, shell-shaped, banded agate earrings delicately detailed with pearls and rose diamonds.

Macklowe Gallery, which specializes in Art Nouveau gems, featured two brooches, one symbolic, enamel, multi swallow brooch, and one breathtakingly feminine and delicately designed floral piece, as well as a range of Victorian through retro jewelry, many of which were signed. Hands down, Les Enluminures has the widest range of Renaissance rings, each one more desirable than the next. At one point I was wearing them all, one or two on each finger, like an aristocrat from the 17th or 18th centuries.

Scroll through this selection of images to see the best in show - pieces that not only drew a steady crowd and offered an unexpected mix of all time periods, but melted my heart, although not the snow. 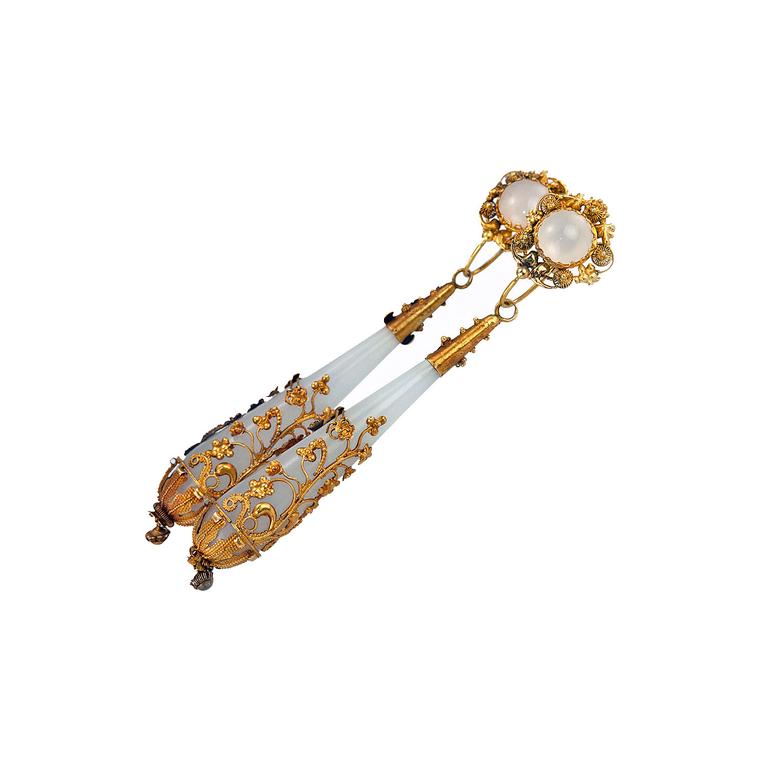 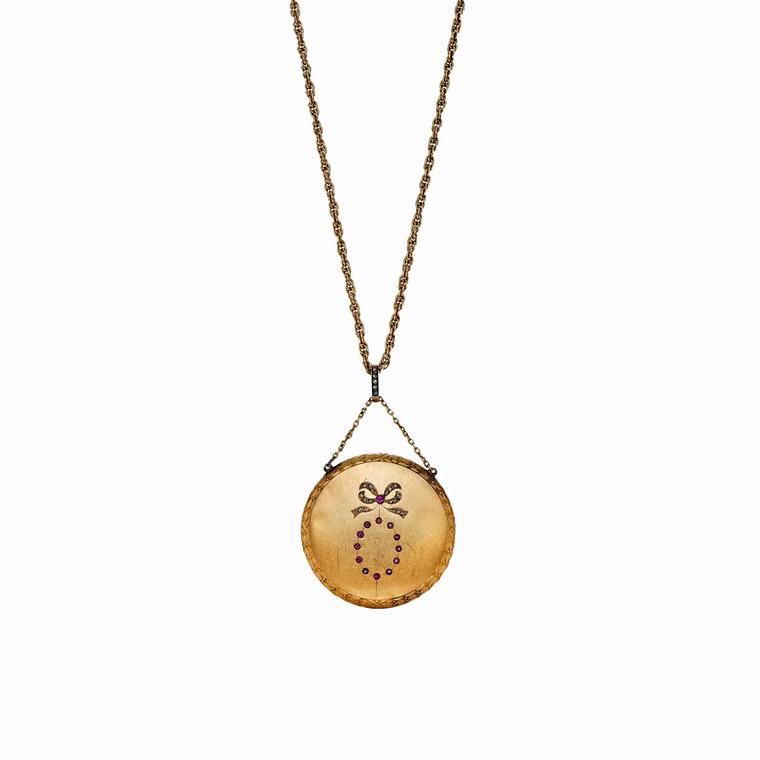