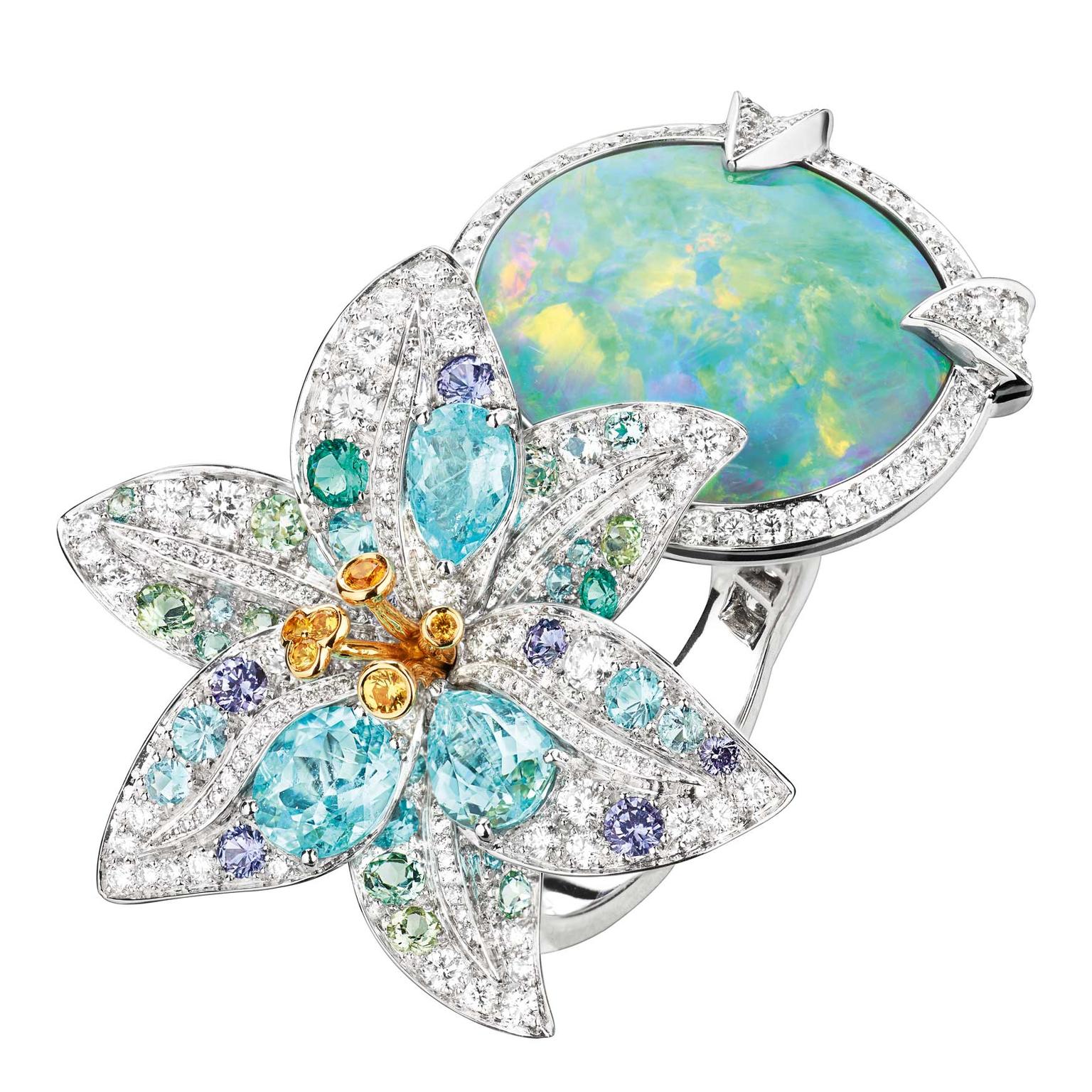 Whether Australian, European, Ethiopian or Mexican, the moody opal, with its magical play of colour, has a special place in the history of gemstones. Unlike other gemstones that have similar structures, when it comes to opals, no two are the same. Each stone possesses its own firework display of colours, with flashes of red, yellow, purple, blue and green flashing through the stone, making them a constant source of awe and wonder.

How are opals formed?

While the Bedouins may have believed that opals were filled with lightning, it is in fact another natural element that gives them their bewitching rainbow effect: rain. Australian opals were formed 70 million years ago, when heavy rainfall drenched the arid ground, seeping into the rocks below and drawing dissolved silica downwards.

When the dry weather returned in arid areas such as the Outback, most of the water evaporated, leaving behind silica deposits in the cracks that would become opals. Opals can form almost any void where the water settles, be it cracks in rocks, inside wood or even ancient fossils. One of Australia’s most curious treasures is Nessie the Pliosaur, whose 110-million-year-old bones were opalised during its fossilisation process. Nessie was discovered in an opal mine in Andamooka, its bones shimmering with a coating of opals.

One of the strongest jewellery trends over the past decade has been the rise of the opal. When Cartier prominently included opals in its highly valuable 2008 Chimera collection at the Biennale des Antiquaires in Paris, the stone was catapulted on its meteoric rise to fame. Today, the opal is found in almost all jewellery houses, its mystery and vivacity chiming with our interest in spirituality and heightened awareness of the environment.

Louis Vuitton’s Blossom ring, above, with a white opal in the shape of a flower showcases the vogue for combining opals with coloured gems, in this case a mint tourmaline. Meanwhile, Chaumet, below, devoted an entire section of its 2016 high jewellery offerings to the lily flower, brought to life by white Australian opals.

In the early 19th century, the notion took hold that the opal brought bad luck. Until then, on the whole, opals were considered to bring good fortune and health. In fact, the Romans thought they were the most precious and powerful gem of all as they included all the gem colours.

In Victoria Finlay’s fascinating book Jewels: A Secret History, the author suggests that it was Sir Walter Scott’s 1829 romantic novel, Anne of Geierestein, that soured the fate of the opal.  The novel’s heroine is seemingly possessed by her opal jewel, which eventually spirits her away. Finlay concludes that it is more likely that opals fell out of favour once the sole source in Slovakia began to dwindle and so the quality of supply diminished.

Princess Alexandra fuelled the superstition when, on becoming Queen, she removed ‘the unlucky opals’ from Queen Victoria’s crown and refashioned her mother-in-law’s jewel with rubies. When Australian opals appeared at the end of the 19th century, European jewellers were sceptical and dismissed them as they were almost too beautiful to be true. Soon, however, the public fell for their mesmerising allure, and the rest is history.

Opals rank at 5 on the Moh’s Hardness Scale, making them one of the softer mineral gems, which makes them unsuitable for engagement rings unless set carefully to protect the mineral. Opals need looking after and can be cracked by exposure to heat. Ironically, it is their high water content - which varies between 5% and 20% - that gives them both their beautiful reflective qualities and their frailty.

Throughout history, opals have been subject to fraudulent practices such as creating ‘doublets’ or ‘triplets’ out of thin layers of opal and sandwiching them between glass to make them appear bigger, adding to their perception of being fragile.

Why are opals cut without facets?

Opals do not need facets to shine out their rainbow of colours, which are created by light bouncing through microscopic spheres inside the stone. Opals are always cabochon shape or left in their soft organic form to show the stone’s natural beauty.

Are opals rare and which are the most expensive?

A precious opal is differentiated from a common opal by the fact it possesses a play of colour, whether in a light or dark background colour. Precious opals are rare, and the most prized are darker in tone, as the contrast of the flashes of colour is greater. These are known as black opals and are mainly found in Lightning Ridge, Australia. White opals are also prized, the quality depending on the vividness of the colour play in the stone.

Kat Florence, a newcomer to jewellery, uses an Australian Lightning Ridge black opal to stunning effect in the gold and diamond ring below. She aptly describes the opal as a "colour frenzy".

Where do opals come from?

Until the discovery of opals in Australia, the sole source was in Slovakia. Today, three of the most sought-after types of opals are Australian, Mexican and the Welo - but what is it exactly that sets them apart? The majority of opals originate in Australia, where it is the national gemstone.

Australia’s rugged Outback provided the perfect geological spot for opals to form, and since it started producing them commercially in the 1890s, it has become one of the leading sources. “This particular opal is very magical, and becomes a different gem in different lights,” says Marie Walshe, founder of British jewellery brand Sorrel Bay. “It moves from milky white to transparent to luminescent blue, and has mesmerising flickers of light particles.”

Australia also produces rare black opals from underground mines at Lightning Ridge, which offer a magnificent play of colour. Black Australian opals with strong flashes of red are called Bushfire opals, so named as they resemble the burning embers of a bushfire.

Margot McKinney, the most exciting jeweller in Australia, uses materials of her homeland to striking effect. The mismatched Viridian earrings above feature two 27 carats of free-form Lightning Ridge opals, framed by a seemingly random pattern of sapphires, tsavorites and diamonds, echoing the scintillating colours of the opals.

Fiery colourings are what make Mexican opals, or Fire opals as they are also known, stand out. These red-orange gems get their colour from fine traces of iron oxide, and their warm glow is believed to promote feelings of courage and stamina. While many Mexican Fire opals do not have the play of colour that we associate with opals, when they do the result is positively volcanic. French jeweller Lydia Courteille, whose ring is featured above, has worked with both types of Mexican opals and describes the gems as “a source of energy, like vitamins”.

Across the globe in Ethiopia, you can also find Fire opals, with flashes of neon red. Gems there can also display streaks of orange, green, yellow, brown and – the rarest of all - blue. In 2008, a new stream of opal was found in Wegel Tena in Ethiopia’s Wollo Province, and these Welo opals are now the most sought-after of Ethiopian opals.

The enigmatic shimmer that all precious opals have - whether they hail from Ethiopia, Australia or Mexico - makes it seem as if they belong to another, more magical, world entirely.  And perhaps that is why we can’t seem to get enough of them. 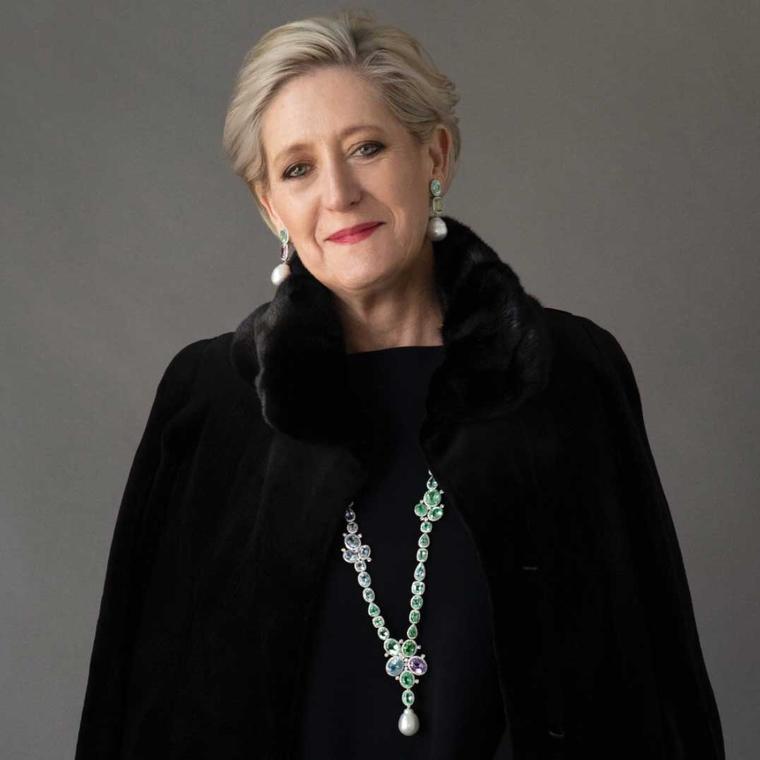 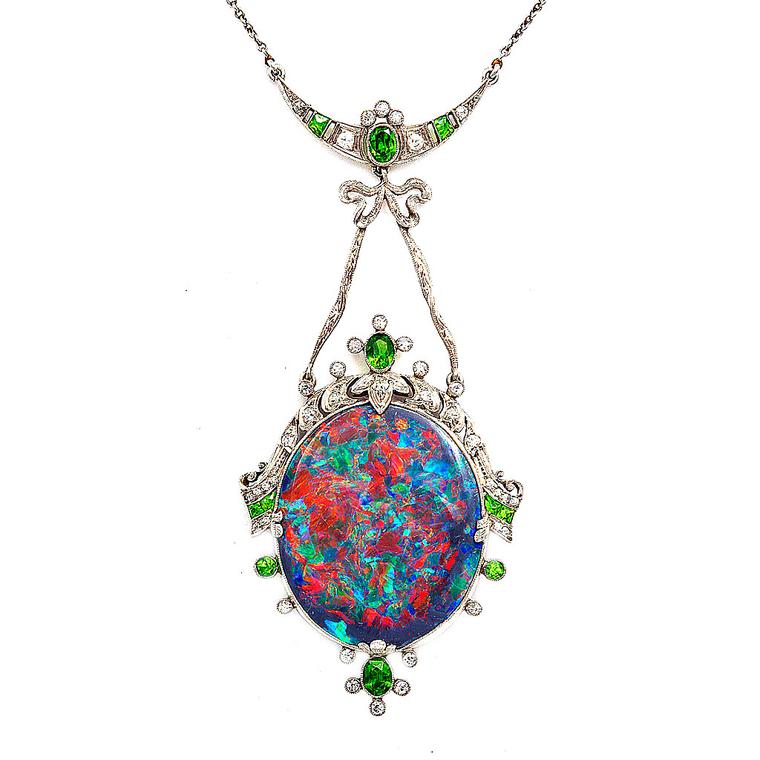 The superstitious history of opal jewellery