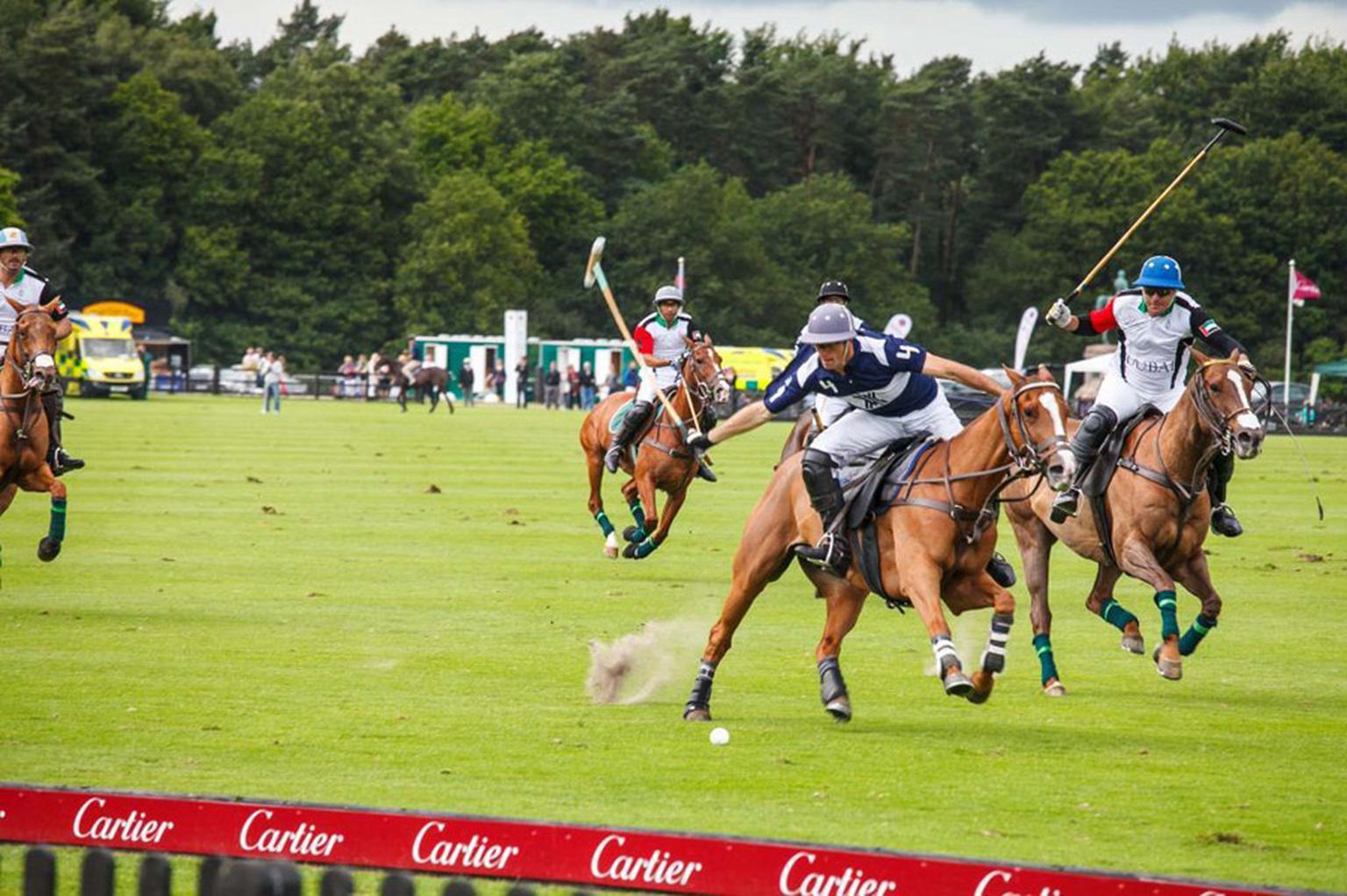 HM The Queen wore the Flame Lily diamond brooch for the Cartier Queen's Cup 2012 at the Queen's Ground at the Guards Polo Club in Windsor on Sunday 17th June. Transforming an enclosure into the ideal 'English Garden' with John Carter's floral masterpieces, the event played host to not only to Her Majesty but a plethora of stars from stage, screen, music, and society, including the newly knighted Sir and Lady Kenneth Branagh, Genesis star Mike Rutherford, burlesque artist Dita Von Teese, songstress Katie Melua and many more.

With a crowd of over 5,000 people, the match unfolded thrillingly between Team Dubai and Team Ayala as they battled on the Queen's Ground at Guard's Polo Club, Windsor Great Park for the Queen's Cup; in the end, it was Team Ayala who triumphed with a final score of 12-11. It also saw Dubai's Cambiaso, considered by many to be the best player in the world, win his eighth Queen's Cup winners' prize and be named 'Most Valuable Player'. Though it was Ayala's Gonzalito Pieres who received the 'Cartier Best Playing Pony Award' for Centimetre.

For this event, the Queen chose to wear the Flame Lily diamond brooch made in Johannesburg in 1947.  According to the Hugh Roberts who wrote the book "The Queen's Diamonds"  in the year of the Diamond Jubilee when all eyes are on the Queen and of course her magnificent collection of diamond jewels, this brooch was a 21st birthday present to Princess Elizabeth from the school children of southern Rhodesia. According to the Daily Telegraph (17 May 2006)  each child donated a tickey or three old pence to fund the gift. Here is the extract from Mr. Roberts' description of the piece.

"It was designed by Len Bell of the Salisbury (Harare) jeweller, H.G. Bell and made by the Cartier-trained jeweller Eric H.S. Kippin (1912-98) at Sidersky & Son in Johannesburg. The stones, which came from De Beers, were set by H. Michel. Two flame lilies were sent from Salisbury to Johannesburg to assist the craftsmen in realising Bell's design. The brooch was given to the Princess during her parents'  tour of Southern Africa in 1947. Five years later, on her return to London from Kenya after the death of King George VI, The Queen wore this brooch as she alighted from the aircraft. In June 1953, two more brooches of this design, also made by Eric Kippin, were presented to Queen Elizabeth and Princess Margaret in Bulawayo, on Queen Elizabeth's first Commonwealth tour as Queen Mother. Queen Elizabeth's brooch was inherited by The Queen in 2002."

In other words, the brooch belonged to Queen Elizabeth II's mother who loaned and inherited the brooch to her. As to be expected, The Queen wore the pearl button earrings and a three strand pearl necklace, of which she owns three. The pearl button earrings were presented to Queen Mary in 1893 on behalf of the "Ladies of Devonshire" and each has a small diamond on top. They are known as the Devon earrings and were presented alongside a pearl and diamond necklace on behalf of 650 "Ladies of England" for her wedding.

Although they had previously sponsored the event in 2006, and have a longstanding association with the sport at its highest levels, Cartier were evidently proud to be beginning a new reign as official sponsor of the Queen's Cup, and in the year of her Diamond Jubilee no less.

PREVIOUS ARTICLE Queen's jewels and diamond brooch at Cartier Polo Queen's Cup NEXT ARTICLE Is Goodwood a goer for girls?