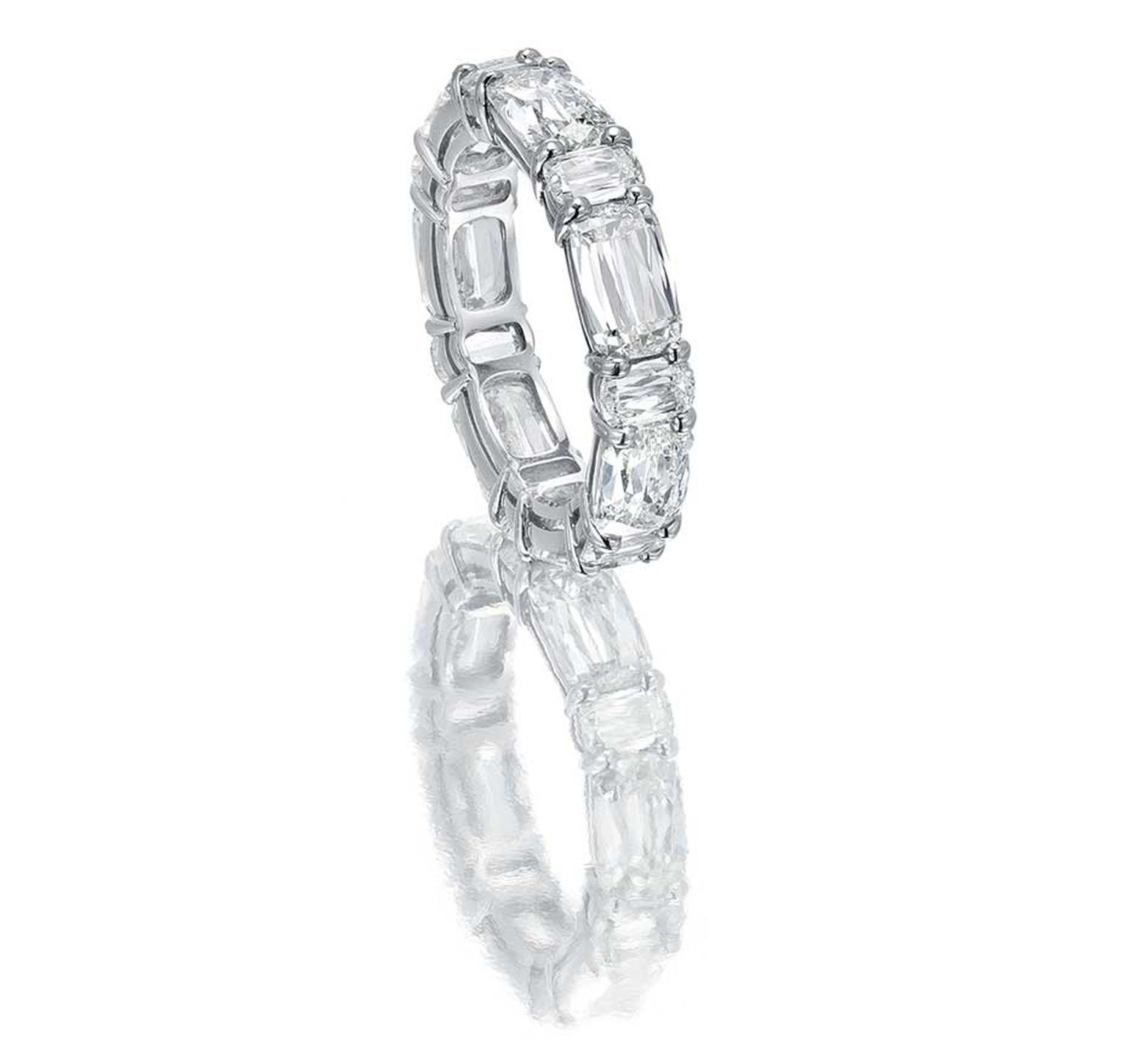 Eternity rings are a wonderful way to celebrate your love. Usually given as anniversary gifts, the most popular style of eternity ring is a band, in gold or platinum, with inlaid stones. The gems are often diamonds in a channel or pavé setting but can also be other precious stones, such as rubies or sapphires, and cover either the whole ring or just the upper half of the band.

Diamond firm De Beers came up with the idea of eternity rings in the 1960s aimed at older, married women and sold under the slogan "She married you for richer or poorer. Let her know how it's going". These days, though, there are no hard and fast rules as to when to buy an eternity ring.

James Amos, director at Boodles, says there is a trend towards couples buying eternity rings sooner than they have done in the past, often only a year or so after marriage and sometimes even at the same time as the wedding band.

Diamond and platinum eternity rings are still the most popular due to the durable nature of the metal and the way it reflects the sparkle of the gems. However, an increasing number of customers are opting for rose gold eternity bands or more unusual designs.

James adds: "At Boodles, our Ashoka diamond eternity rings have become increasingly sought after, offering the elegance of an emerald cut with the femininity of something softer. These rings are often worn on the opposite hand to the wedding ring due to the bigger stones."

Boodles has an impressive selection of eternity rings, ranging from the glamorous Ashoka Full-Hoop Eternity Ring set with impressive Ashoka-cut gems, to the contemporary Waterfall Full-Hoop Diamond Ring, with round brilliant diamonds interspersed with diamond-set bars.

If you're married, an eternity ring is normally worn above or in between the engagement ring and wedding band on your left ring finger. However, if the band is too wide to create a sleek look, it can also be worn on the third finger or on the right hand. For a seamless ring trio, it is a good idea to buy an eternity ring in the same style as your existing rings. Many jewellers design wedding sets specifically for this purpose.

While the full eternity ring with stones encircling the entire band to represent your eternal love is traditional, they tend to cost two or three times as much as the half eternity ring due to the additional diamonds. They are also difficult to resize so tend to be made to order.

The Tiffany Jazz eternity rings with either blue or pink sapphires are perfect for those looking for a colourful eternity ring to mark the birth of a child. Set with round brilliant diamonds and sapphires, this ring will look best worn on a separate finger so it doesn't overpower the engagement ring. The shared-setting Tiffany eternity ring with a half circle of round brilliant diamonds is a good choice if you want to wear the classic ring trio on your left hand.

Interestingly, the line between wedding rings and eternity rings is becoming blurred. Eternity rings are increasingly being worn as wedding bands; in fact, many jewellers list them under the wedding bands section on their websites. Striking and contemporary, this platinum wedding band from Cartier set with baguette-cut diamonds would make a perfect eternity ring.

Named after Estelle Arpels, who founded the maison together with her husband Alfred Van Cleef, the Estelle eternity ring by Van Cleef & Arpels is as elegant as it is romantic. The wide diamond-set band is edged with platinum beading and fits seamlessly with the Estelle engagement ring. Similarly, the Harry Winston eternity ring with micropavé diamonds is also designed to be worn alongside the jeweller's matching micropavé engagement ring. 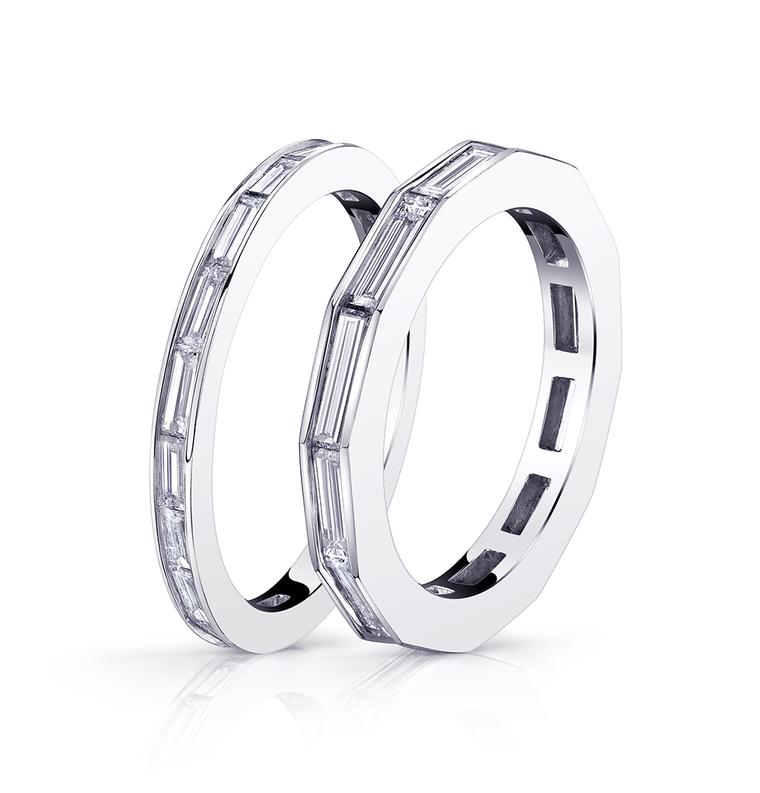 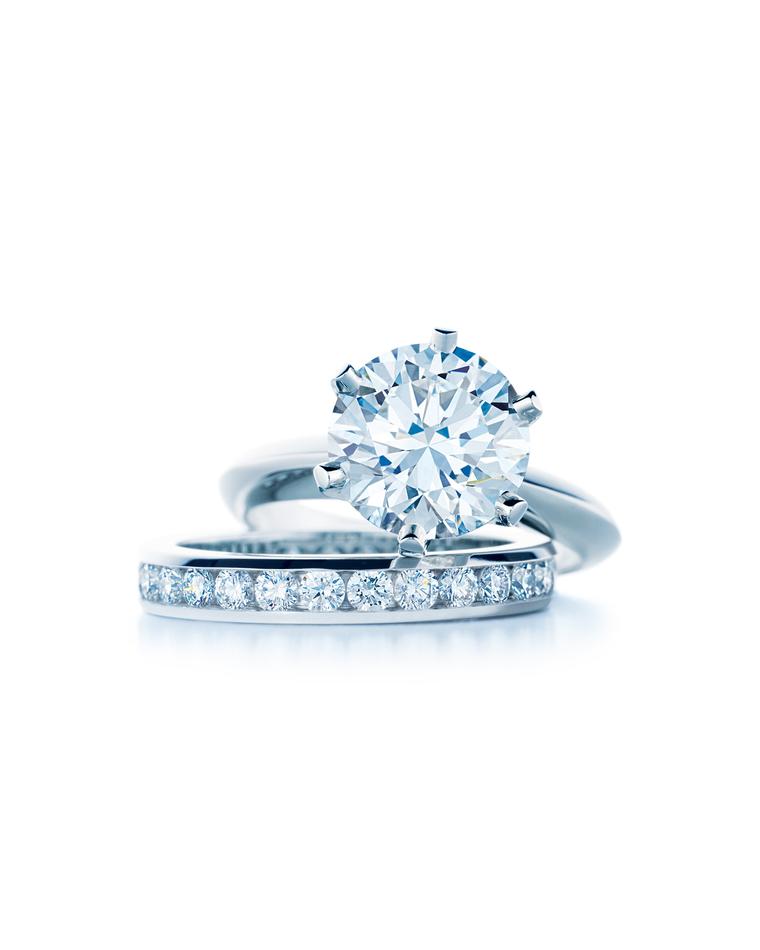 Round brilliant diamond engagement rings: unrivalled in popularity and sparkle