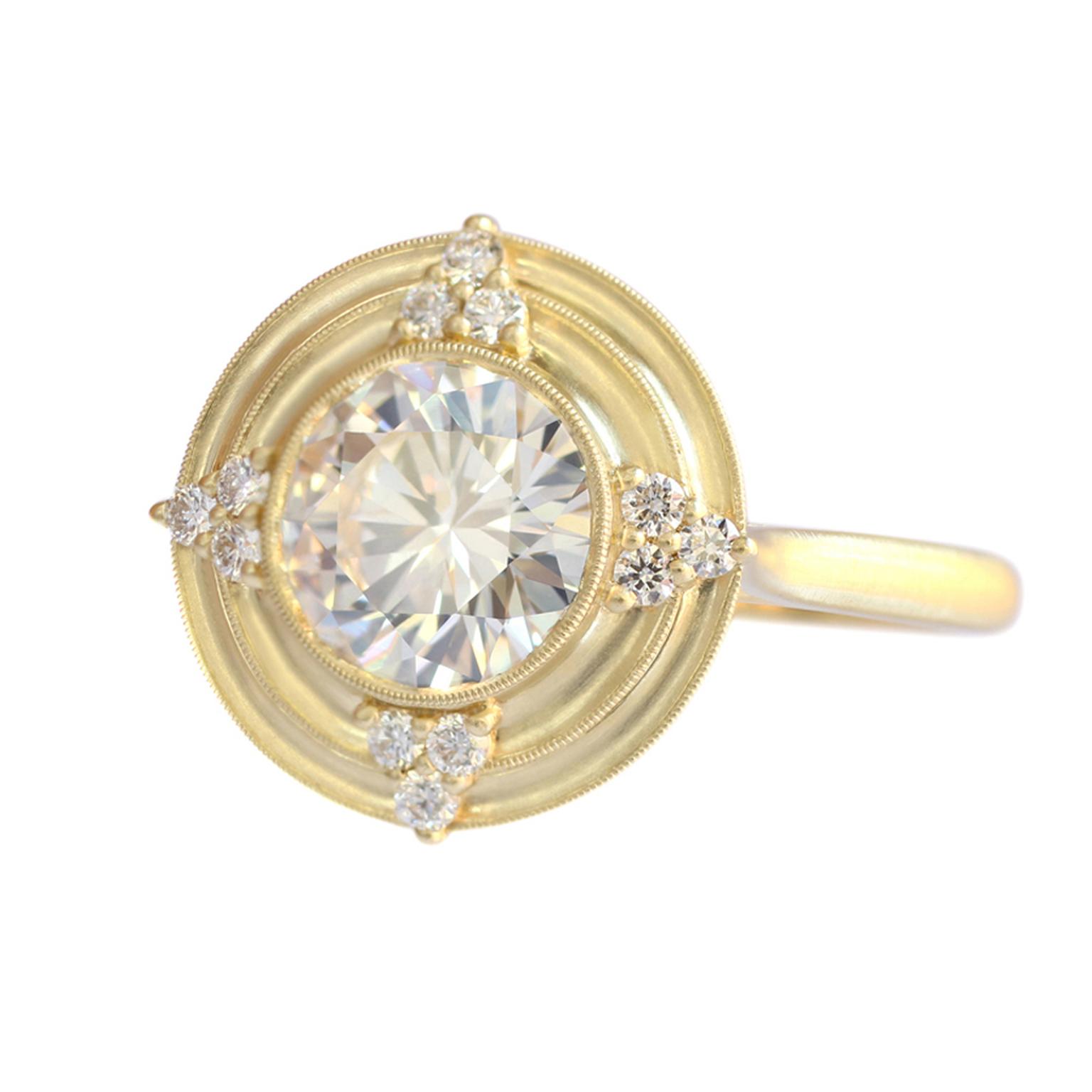 US designers such as Sofia Kaman, Karen Karch, Rebecca Overmann, Megan Thorne and Erika Winters have stepped up to the challenge of creating truly beautiful antique-style engagement rings within their bridal collections.

Ironic as it seems, the diamond cuts they have fallen for - which were originally set in betrothal rings in the 18th and 19th centuries - returned in the guise of unconventional engagement styles when independent jewelers began to move away from the brilliant cut and experiment with rose and mine cuts  in the late 20th and early 21st centuries. Designers such as  Erica Courtney, Katey Brunini, Penny Preville, Cathy Waterman and Robin Renzi of Me&Ro rejuvenated old cuts during the late 90s, and cultivated a small group of brides-to-be who wanted something different to the mega-watt brilliance they saw on the left hands of their peers.

Over the past 10 years, more and more creative-thinking designers are saying “I do” to alternative engagement rings featuring antique and antique-style diamond cuts first seen flickering and dancing in the candlelight before the advent of electricity. Many of these stones - with softer faceting and beautiful natural occurrences - are unique, with a history that offers a magical presence in the contemporary woman’s desire for customization and individuality.

Due to the fact that these stones were, and still are, being taken out of period pieces that were broken, cracked or worn down, stonecutters from Antwerp to India began fashioning new versions to give the same appearance and personality of the old cuts. While some designers’ engagement rings stay true to the noble beginnings of these shapes, other designers set them into clean-lined, geometric silhouettes. Natural colors as well as the new pastel opaque-colored rose cuts also create a marriage of old and new. Perhaps the biggest influence in how we are witnessing unusual engagement rings becoming the new norm is that women who once wanted similar styles to their friends and peers, are asking for anything but. They prefer to stand out rather than blend in, opting for personal style over status.

The following US designers have created truly distinctive antique-style engagement rings. They are focusing on the most popular of both authentic period diamonds and the new and sometimes exclusively cut variations of these historical shapes: rose, opaque rose, old mine, cushion and European cuts. Here is a description of each designer’s aesthetic and the rings they propose for popping the question.

“When I first started designing in 2001, any bridal ring that was set with an antique old mine, rose or cushion cut was considered an alternative to traditional engagement rings,” explains Sofia Kaman of Sofia Kaman Fine Jewels.

"I love using old cuts because they add character to an engagement ring. But not so much that they don’t let the wearer’s personality shine through,” says Kaman. She approaches her jewels much in the same way, “There is something about the mosaic-like pattern, subtle warmth, and depth that can come from a rose, mine or old European cut, which I find far more intriguing and mesmerizing than the brilliance of a newly fashioned colorless diamond.” These old cuts share Kaman’s sensibility, “they are simultaneously elegant and refined yet possess a rough-hewn and handmade authenticity with natural occurrences that I try to imbue into all my pieces and particularly my engagement rings. These stones are perfectly imperfect.”

In the business for 26 years, Karen Karch has always defied convention with her collections that are full of visionary contradictions, pulled together with a fashion-forward sensibility and artisan’s eye. Whether it’s living in Manhattan or inspiration that ranges from Gothic to Victorian, Karch is a designer who can mix grittiness with glamour, organic textures with opulent gems, and feminine and masculine details into one collection.

The result is rings of striking beauty and a highly distinguishable sensibility. Karch was one of the first to introduce the black diamond into vintage-style engagement rings and also to hand-texture platinum to allow a richness and natural feel, which all adds to her signature style. She has also been a proponent of the new old rose cuts ever since the higher domed styles began being produced again. Karch’s newest pieces feature white rose cuts as well as black diamonds in an evolution of her crown and claw settings.

Trained as a bench jeweler working both in wax and metal, Rebecca Overmann explains, “My designs are based on feeling and form, and many of the textures and details in my work are a result of this direct hands-on process. My inspiration often originates from natural shapes that are simplified and abstracted, becoming more of an interpretation and expression than an actual motif.” She continues, “I don’t like jewelry that’s overly fussy or detailed, just simple and pure in it’s most pared-down form.”

This philosophy has spilled over into Overmann’s bridal ring business to gain her a role as one of the star independent bridal jewelers in the US. She explains that her passion for antique diamonds began with a pair of old European cuts that she removed from a brooch purchased at auction. “I was mesmerized by the beauty of the diamonds, yet the brooch was not collectible or a rare piece. Once I worked with those stones, I was hooked. The more defined and natural refractions of old cuts fit very well with the textures and organic elements that are often part of my designs.” Overmann also works with cushion cuts, pure white rose cuts, as well as opaque grey, black, green and pale yellow diamonds. A variety of shapes: pears, baguettes, ovals, rounds, marquise and cushions are set in her signature matte yellow gold.

Although Megan Thorne began her career as a fashion designer of lingerie, she realized she felt more at ease in the field of jewelry. “After taking a variety of benchwork classes, all of the clumsy quirks I found in other mediums such as stitching my finger to the sewing machine, completely dissolved when I picked up jeweler’s tools,” says Thorne, with her usual sense of magnetic good humor.

But her background of working with lace, embroideries and other delicate textiles became intricately woven into the fabric of Thorne’s design aesthetic since she launched her collection in 2007. Although she started with all categories of jewelry, she found that her engagement and wedding rings were her best-selling items. Feminine and fluid, with a nod to vintage details, Thorne’s rings are crafted from recycled gold with ethically sourced stones and are all produced at her studio in Fort Worth, Texas. Her newest collection is a juxtaposition of clean-lined, bezel-set center stones framed by feminine silhouettes. She prefers geometric center gems, often updated angular versions of the traditional rose-cut, which provide a simple, modern component rather than unnecessary frills and flourishes. Thorne still displays affinity for lace and delicate details but also appreciates the heft and substance of hand craftsmanship.

“The choice to use antique-cut diamonds and traditional precious gemstones such as sapphires is natural as we consider the longevity of our pieces. We can be sensitive to the significance of an engagement ring - the financial investment and the monumental moment it celebrates - by using traditional materials in unexpected ways. I hope my pieces will age with grace and be passed onto loved ones. I actually wear my great-grandmother's engagement ring, and hope that our bridal rings also become future heirlooms.”

Erika Winters attributes her love of old-cut diamonds to her passion for collecting antique jewelry. She explains, “My first engagement ring collection was set with old European cuts and antique cushion cuts. They are like time capsules to me, capturing the history of diamond cutting and the romance of an era. Pure magic. I also work with new cuts that are based on older forms, such as French-cut diamonds, and unique portrait and hexagonal cuts.”

Winters also has a preference for creating pieces that present old-school gems with a current perspective. “I have several rings in the works that feature emeralds and sapphires, in which I will be applying an approach that is anything but traditional.”

She continues, “I cherish finely-wrought details juxtaposed with negative space and simplicity. My collection is not a reworking of vintage elements, but rather a very modern homage to the elements that I identify so strongly with from the Victorian period.” The finish is soft, yet finely textured to evoke antique rings that have been worn for decades. Erika’s designs are all handcrafted in the US.

As for her own engagement ring, Winters wears her Thea halo design. It’s set with a spectacular old European-cut diamond. “The ring I wear is particularly meaningful to me as I designed it to honor my late mother, and it was the first iteration of the Thea style.”

PREVIOUS ARTICLE Get the glow with neon-bright SuperLumiNova NEXT ARTICLE A very British affair: Boodles jewellery and Sophie Dahl 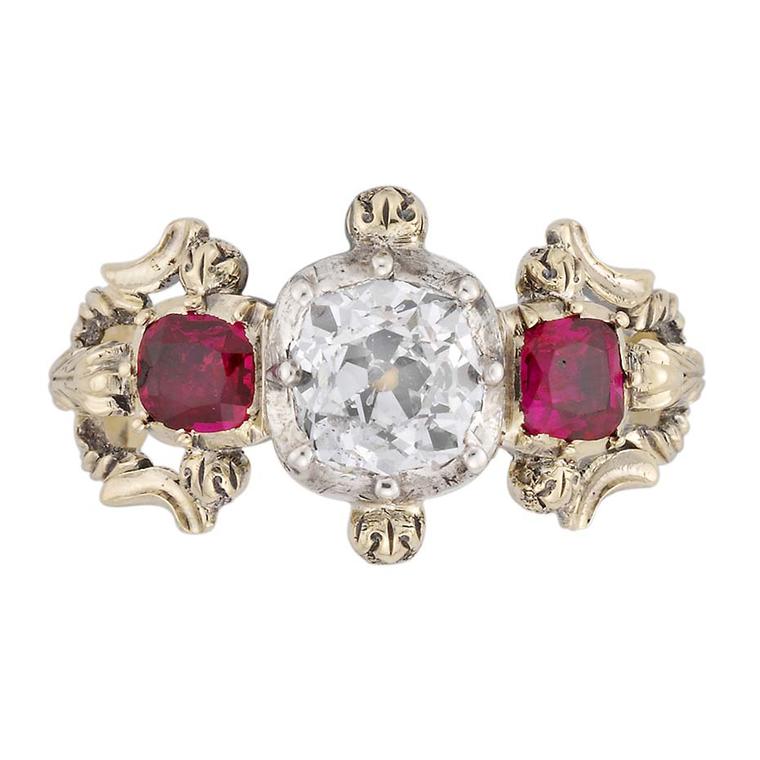